Bitcoin price dropped after over 150 million dollars’ worth of bitcoin Liquidated on BitMEX, the largest in 2020 so far. Most of the liquidated positions were long positions with high leverage, building on the bullish sentiment surrounding the next BTC halving.

27 February, 2020 | AtoZ Markets – Most recently, things have started to seem a bit more uncertain for Bitcoin (BTC). The flagship cryptocurrency has spent the past two weeks on a clear downward trend from a yearly high of around $10,400. Today, the cryptocurrency market experienced a massive drop in the price of bitcoins.

$150 Mln Worth of Bitcoin Liquidated on BitMEX

According to data analytics provider Skew, on 26 February, more than $150 million worth of Bitcoin was liquidated on the BitMEX exchange. Millions of dollars in long and short positions on BitMEX dropped the Bitcoin price to $8,670, a drop of more than 6%. 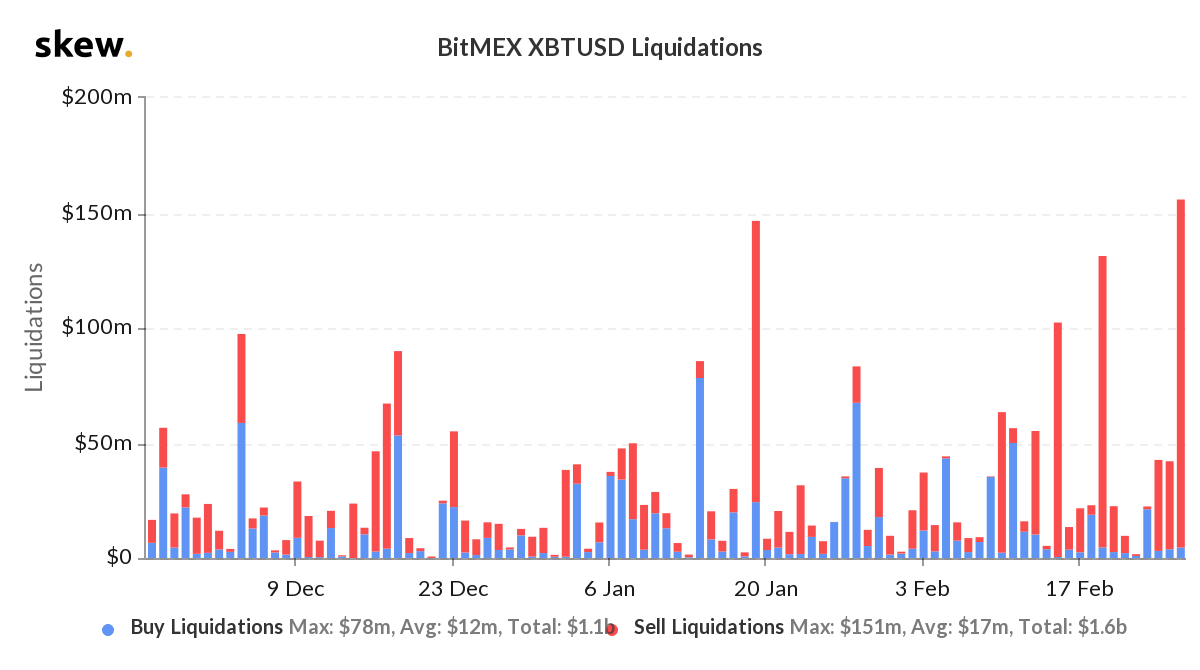 Skew points out that this is the highest dollar value of liquidations on the popular derivatives platform for the whole year. The previous highest liquidations on January 20, 2020. At the end of January 19, the price of Bitcoin fell by more than 400 dollars in a few minutes. That was about $150 million suddenly change hands.

Although the price of Bitcoin has recovered slightly to $8,800, it could be a difficult recovery for the cryptocurrency.

The price of BTC began to drop below $9,000 at around 14:00 UTC on 26 February. An hour later, BitMEX had its highest liquidation since the start of the new year, well over $100 million.

Will the Next Bitcoin Halving Event Boost BTC Price?

Traders are already preparing for the possibility that the value of the cryptocurrency drops below $8,000. This could affect Bitcoin’s impression before the next halving event, scheduled for the week of 18 May.

The latest action on BTC prices continues to throw cold water on the idea that crypto can be used as a refuge in times of uncertainty around stocks and bonds.

Bitcoin price has dropped 14% in the past three days. But in the upward race that preceded the previous halving, we may have some corrections of more than 40%, to put things in perspective. It could be a healthy correction, before heading to new annual highs.

However, some observers are more optimistic. Tom Lee, co-founder of Fundstrat Global Advisors, predicted that the price of bitcoin would rise to more than $ 26,500 by this summer. The prediction is based on its 200-day moving average.

The Impact of Coronavirus on the Global Economy

Many crypto exchanges and blockchain technology companies have felt the impact of the potential global coronavirus. Employees of Chinese mining companies have been forced to stay at home.

Amidst global coronavirus tensions, traditional markets are also in turmoil, with major indices such as the S & P500 and Dow Jones Industrial falling more than 7% during the week.

Bitcoin’s recent decline reminds us that the cryptocurrency market can be just as fragile as traditional investments. The price of XRP also collapsed by almost 60% on BitMEX on 15 February.