The Euro touched 1.049 in the Asian market in a clear bearish drive that dominated since the beginning of March. It continues to stay down after many technical experts expected it to go up. We also expected a corrective rally but it now seems Euro has a different plan. In a bid to go ahead, we present the following scenarios based on 3 March EURUSD Elliott wave Forecast.

03 March, AtoZForex - The corrective bullish triple zigzag that completed early February was a great sign that the Euro has a strong likelihood for going bearish. The resultant move was to be a motive wave - a 5,3,5,3,5 move. There was a sharp rally after price completed an impulse wave in mid-February at 1.052. The rally was expected to be a corrective a-b-c.  At this juncture, price is at a crossroad. We look at different scenarios by which the Euro could play out in the next few weeks.

The chart below shows the possibility of a continued bearish move toward 1.04-1.037 before the bullish correction.It shows a bearish ending diagonal pattern completing the 5th wave. 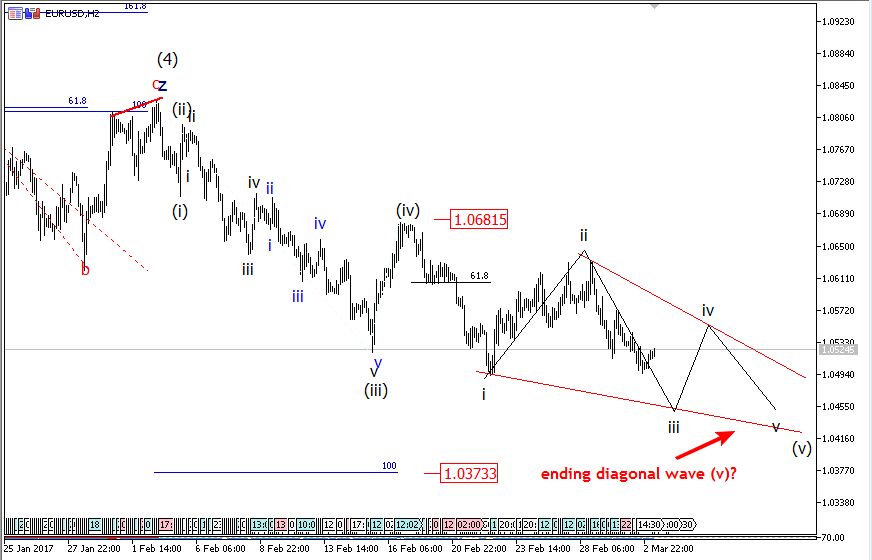 We saw the importance of the diagonal pattern this month in spotting reversals. There was an ending diagonal in AUDUSD completing an impulse wave and price dipped very fast. A bearish leading diagonal in USDCAD also saw price rallied fast . If the 5th wave of this impulse dip also completes the same pattern, we may see the same thing happening. This diagonal forecast will be dissolved if price breaks above 1.0574. A break above this level will be the first indication for the rallies. The second scenario below discusses this possibility. The chart above shows the impulse wave completed at 1.0492. An a-b-c correction should follow. (a) completed with a diagonal and (b) a zigzag which came so close t0 1.049. There is also a triple bottom reversal chart pattern. A break above 1.0574 with 1.049 remaining a support, will send price further upside. 1.071 is the next level to watch out for the bullish reversal to terminate.