Ethereum has dropped in value compared to BTC since the beginning of this month. Will the small rally in the last few days lead to bullish resurgence or price will drop further? The 25 February Ethereum price prediction below gives a general technical outlook to ETHBTC with Elliott wave theory.

25 February, AtoZForex - Since the beginning of this month, ETHBTC had dropped about 35% in a corrective move. Ethereum in December 2017 and January 2019 has been the better performed coin between the pair. ETHBTC rallied fast in these two months and completed an impulse wave. An impulse wave according to Elliott wave theory is formed when price completes a five non-overlapping waves in a particular direction - up or down. The impulse wave is expected to be followed by a 3-wave correction. These 5-waves, 3-waves moves exist in different patterns and dimensions.

The impulse wave completed on 1st February at 0.123. Price has been dropping since. In the last update, we discussed where we expected the drop to reach before price probably resumes upside. The chart below was used in the last update. 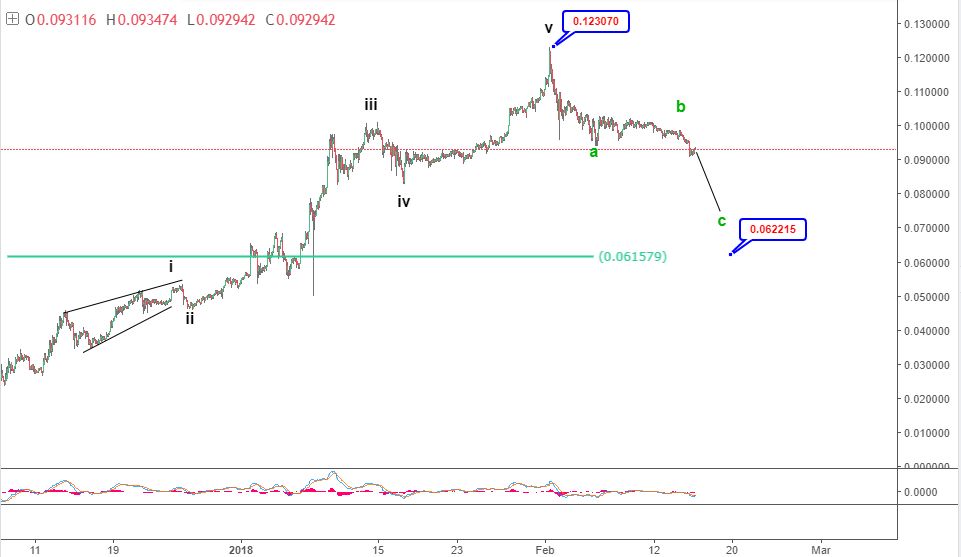 Price is still in a bearish corrective mood. I expect the bearish move to continue to 0.0622 or slightly above before the bullish trend continues. Ethereum is fast becoming the blockchain of choice. If this continues, ETHBTC will rise further. But until the current bearish correction is over, there many not be enough technical reasons to think upside now

Since the last forecast, price has been dropping further in a bid to complete the bearish corrective wave before resuming upside. Price dipped to 0.077 and now showing signs of resuming upside. At 0.077, the correction would be shallow. At least price is expected to dip to 0.06-0.07 zone to complete the correction unless it breaks above wave b top. If price breaks above wave b top, the scenario below would be expected to play out. 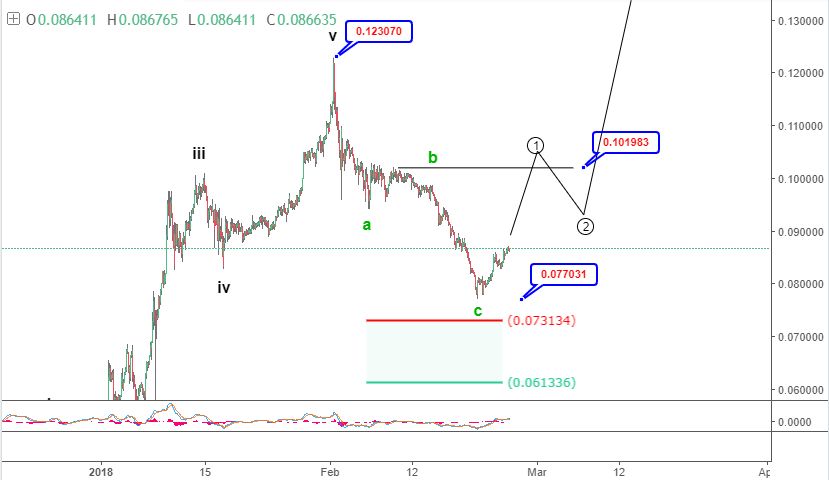 If price breaks above 0.102, then the prevailing bullish trend is more likely to resume. A wave 2 dip could be an entry level. If price stays below 0.102, a double zigzag corrective pattern could be seen down to 0.06-0.07 before price resumes upside. Stay tuned for the next update.