It was a big thing in 2021 to buy and sell Non Fungible tokens, also known as NFTs, on the internet. Many people were willing to pay a lot for digital art and other things. In the last few years, the use of cryptocurrencies like Bitcoins has gone up a lot.

Before we go any further, we need to know what NFTs are.

An NFT is a digital asset or a unique piece of data that can't be changed. It's stored on a digital ledger called a blockchain. Photos, videos, and audio can be linked to them as well.

NFTs use a digital ledger to give a public certificate of authenticity or proof of ownership to people who don't want to see it.

Digital art or memes made with NFT (Non-fungible tokens) are at an all-time high right now in the digital art or meme market. NFT sales went through the roof during the COVID-19 pandemic. If you are a fan of technology and want to spend a lot of money, this is a big thing.

These digital assets were sold for a lot of money this year. GIFs, songs, and videos were among them. But the most sales were made for digital art.

In 2021, the world of online memes was turned on its head when a number of rare and valuable NFTs (non-fungible tokens) hit the market. These are some memes that sold for millions of dollars, with some fetching prices as high as $10 million! Here is a look at the top NFT memes that sold in 2021. Read our blog post on AtoZ Markets about top NFT memes.

In 2021, many memes gained fame across social platforms. Who knew some of those memes would bring fortune for some people. Let's have a look.

The Distracted Boyfriend meme is a popular internet meme that shows a picture of a man looking at another woman while his girlfriend looks on and isn't happy about it. An example of how the meme has been used is when someone is thinking about cheating on their partner or is too busy with something else to pay attention to their partner, for example. 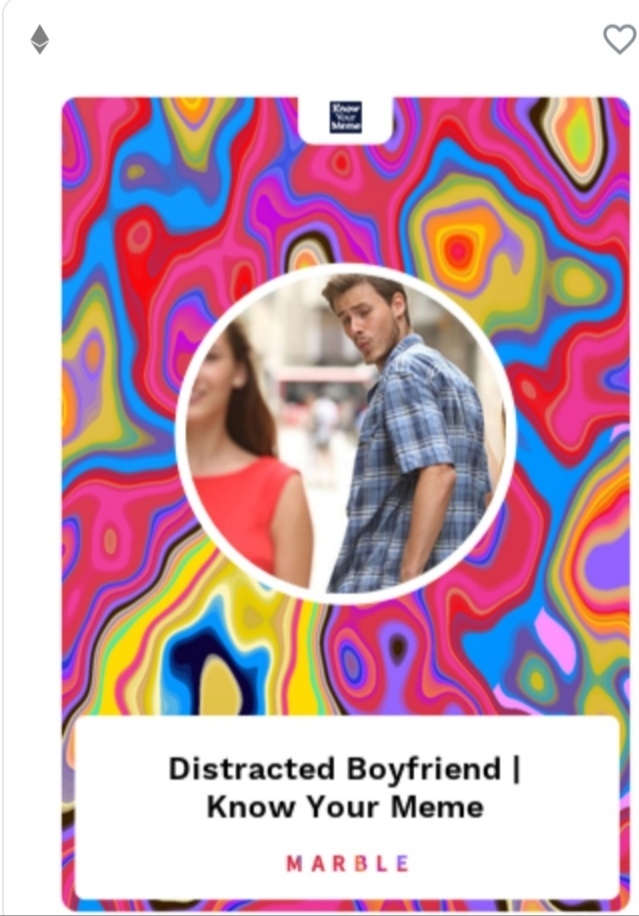 The Distracted Boyfriend meme is one of the most popular internet memes that shows a picture of a man looking at another woman while his girlfriend looks on and isn't happy about it. An example of how the meme has been used is when someone is thinking about cheating on their partner or is too busy with something else to pay attention to their partner, for example.

On Instagram, the "Distracted Boyfriend" meme was first shared in February 2017. It was made by a user named @memeprovider. The original picture was shown in the post. Antonio Guillem, a Spanish photographer, took it. The picture quickly went viral, and soon after, memes with different versions of the picture started to appear on the internet. It has been liked more than 650,000 times as of January 2019.

In May of 2021, a single raw file of the photograph was auctioned off for $15 million!

Next up is the "Roll Safe" meme. This popular meme features a screenshot of actor Kayode Ewumi from the British sitcom "People Just Do Nothing", with text added that reads "ROLL SAFE". The meme became popular in early 2018 and has been used to caption various situations where someone has made a risky decision. 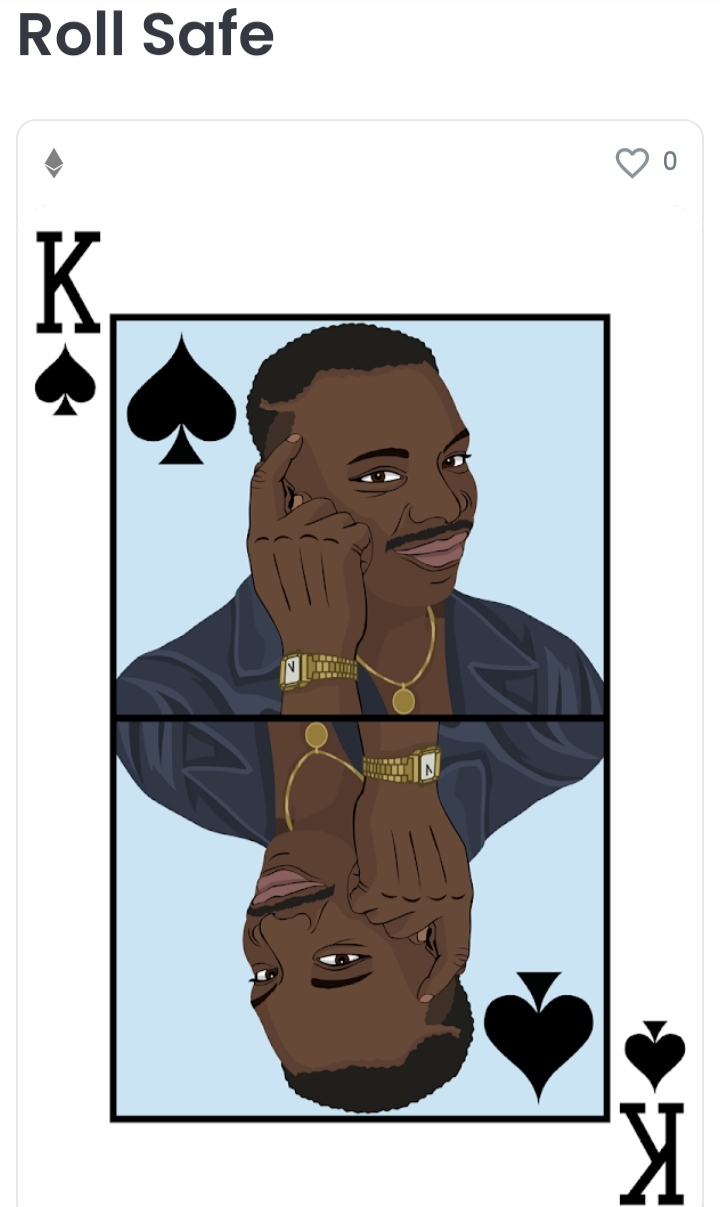 In a YouTube video, the Simpson is shown smiling and pointing to his head after saying that he likes women because "she's got good brains," and then joking that she can do oral sex on him. It got more than 1.04 million views and 1,300 comments in just eight months!

"Doge," the image of a giddy Shiba Inu that is considered to be among the internet's most famous and well-known memes, has become a non-fungible currency known as a NFT. 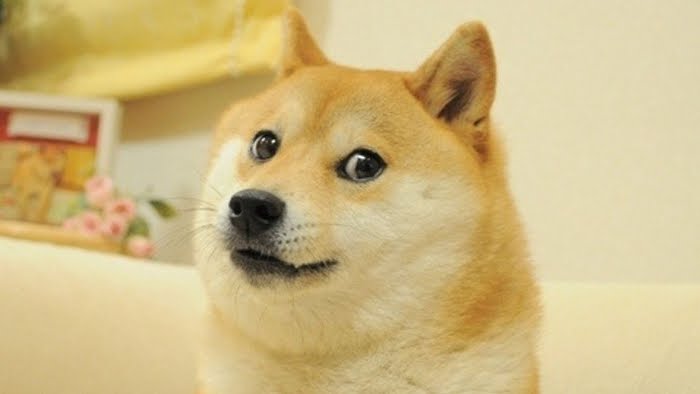 The winner of the auction was @pleasrdao. He made an offer of 1,696.9 in the crypto Ethereum valued at around $4 million, as per Zora, the auction site. Zora.

"We're so happy to be a part of this milestone in internet history. If any meme deserved to be the new meme NFT record holder, it's Doge," said Don Caldwell, editor-in-chief of the internet meme database Know Your Meme, which has certified Doge prior to auction to confirm it was auctioned by the rightful owner.

Caldwell stated that Doge the meme, which he described as "one of the most iconic memes in internet history," was previously awarded the Know Your Meme's 'Meme Of the Decade' in December, 2019.

The meme was initially offered for auction on Tuesday afternoon by Atsuko Sato, owner of Kabosu the dog featured in the picture The auction lasted for about three days before it was transferred to the @pleasrdao. In December of 2021 the NFT variant from the Doge meme was purchased by a buyer for $11 million!

Arthur Fist is a popular meme that is popular on the internet. The character is commonly utilized to express anger or frustration in comments and posts online. He is an adaptation off the Arthur cartoon on PBS and was first seen on Reddit in the year 2016. 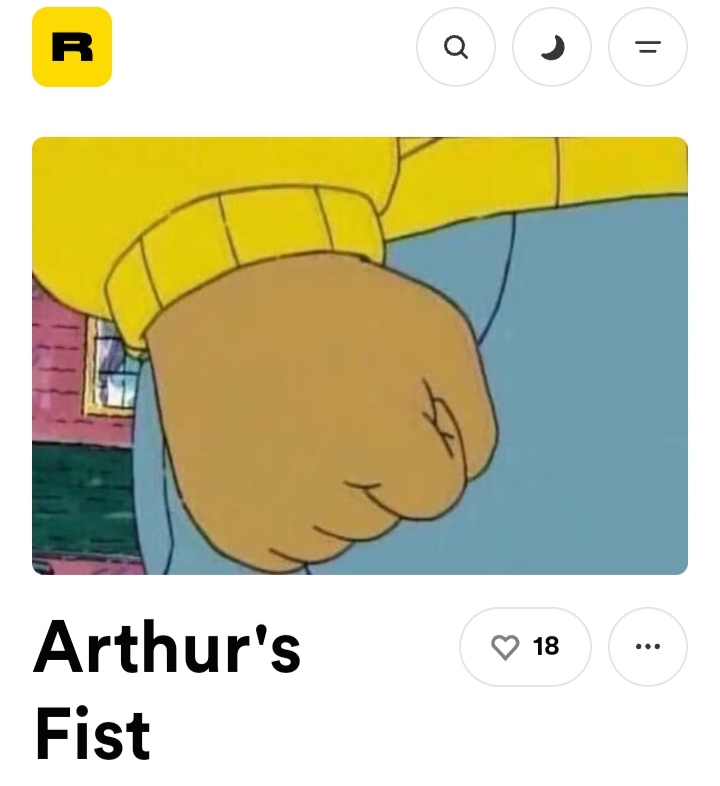 Since its inception, the Arthur Fist meme has been extensively used across social media and websites. Arthur Fist has even appeared on merchandise like phones and T-shirts. This meme's spread is showing that it is not decreasing, and it is expected that Arthur Fist will continue to be a household name online for a long time to be.

Are you looking for a method to vent your frustration on the internet, make sure you make use of this Arthur Fist meme! You're sure to have a laugh with your acquaintances. In June 2021, the NFT variant to Arthur Fist was released. Arthur Fist meme sold for $11 million!

The next item to be featured is the "Nyan Cat" meme. A one-of-a kind digital representation of the Nyan Cat meme from 2011 was sold for around US$590,000 at an auction on the internet on February 19, last Friday. In the last few weeks the sales on auction sites of non-fungible coins - often referred to as NFTs have been growing rapidly, because bitcoin, a cryptocurrency, has exploded.

In the case of Chris Torres, the creator of Nyan Cat, the NFT sale marked his first foray into the realm of crypto art." I'm extremely astonished by the outcome and I'm extremely happy that I've opened the door for an entire new meme market in the world of crypto," Torres told Nasdaq.

The 2007 original video "Charlie Bit My Finger," the standard bearer of internet awe, has been sold as a non-fungible token for $760,999. the family behind the video will remove the original video from YouTube for the sake of.

A still image of a YouTube video known as 'Charlie Bit My Finger.' Credit...Davies-Carr Family

The original video that has nearly 90 million views, shows Charlie Davies-Carr, a baby in England who bites the fingers of his older brother Harry Davies-Carr. Then, they are laughing when Harry shouts "OWWWW."

The owner is also capable of creating an original parody of the film with Charlie the hare and Harry Davies.

There are numerous duplicates of the YouTube video that are still on the internet, including one that was modified by the family to prepare for the auction. The auction did allow buyers the opportunity to "own the soon-to-be-deleted YouTube phenomenon" and become the "sole owner of this lovable piece of internet history."

Choose a better potential candidate for a lucrative meme NFT We'll wait. The appropriately named meme featuring"the "Success Kid" clenching his fist and displaying his determination was purchased at US$52,586.85 from Ethereum. Did you find extra nuggets of chicken with your McDonald's meal? Achievement Kid. Did it through the week without crying? You're a success. Did you sell the viral video for more than $50,000 dollars? What a Kid! 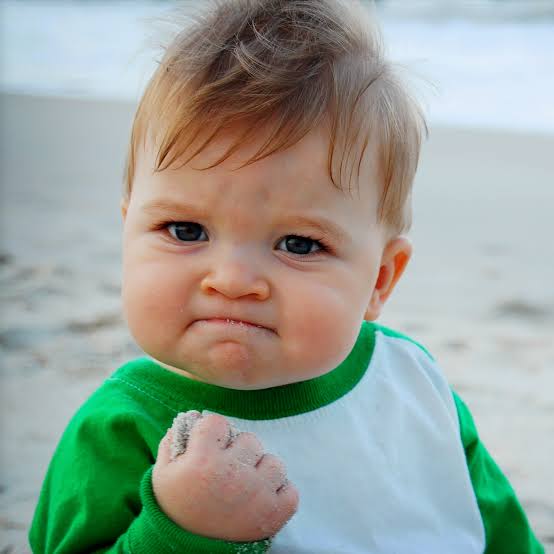 The possibility that memes bring more than just recognition for the creators of them is exciting. As NFTs gain popularity, we'll be able to observe how other meme creators can make the most of this digital asset. 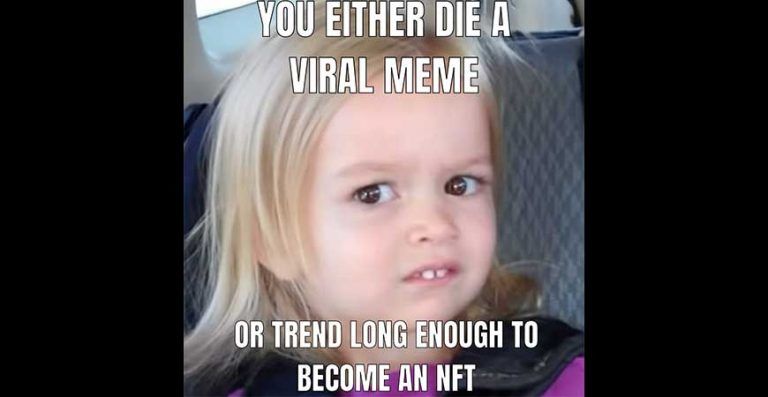 Unsatisfied Chloe Clem flooded our Instagram feeds since 2013 when she sat next to her mom in a clip because she wasn't happy about attending Disneyland instead of going to school. She expressed that "um yeah...nope" emotion that almost everyone on the internet can identify with in the present. The September 20, 2021 eye-rolling Chloe meme NFT was sold for US$76,377.50. If she didn't like an excursion to Disneyland it's clear she's not happy with this. The Clem family plans to use this money to fund their two daughters' educational needs. 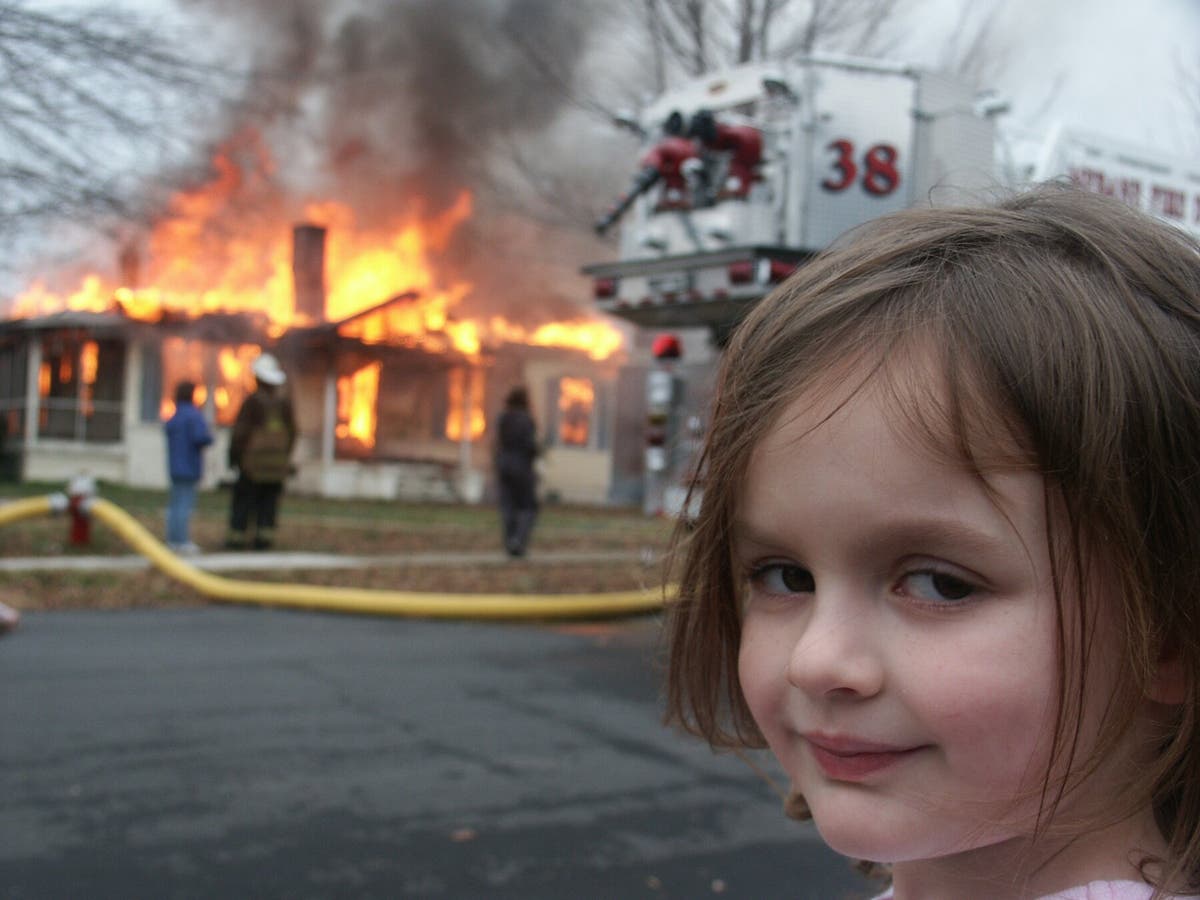 The picture of the disaster girl was taken in 2004. It's been used in a myriad of memes and it's not any way close to the ones we've seen!

The image itself was made by David BARNES who decided to snap the picture of his 4-year old daughter Zoe Roth with the fire truck in front of her. For reasons unknown, she created this facial expression.

Zoe herself doesn't know the moment she became one of the most popular internet memes. In an interview in the year of 2018, Zoe declared: "I had no idea I would become a meme." But things have changed because Zora Roth has sold an NFT Version of Disaster Girl on Foundation Platform for $15,000. So unknowingly she made a good sum of money. Let's see if she gets some more sales. 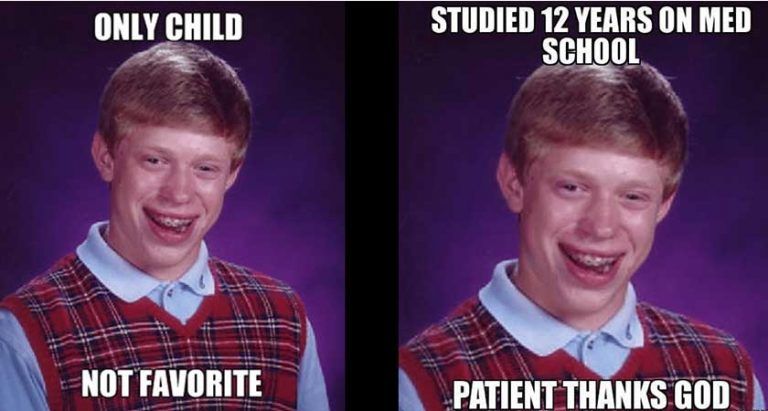 The red-headed "Bad luck Brian" whose true name is Kyle Craven. He has been the face of unfortunate events since the year 2012. "Stops, drops and rolls...into another fire", "Looks on the bright side...goes blind", "Opens a business...gets fired" and many more captions are accompanied by braces. He also took one for his team each whenever something happened to us.

He is now getting the benefits by completing the NFT sale of $36,000 USD in Ethereum. Yes, that's right. What began as a shoddy yearbook image became a coveted meme NFT was sold for more than US$30,000. The story seems to be good with "Bad Luck Brian" What do you think? 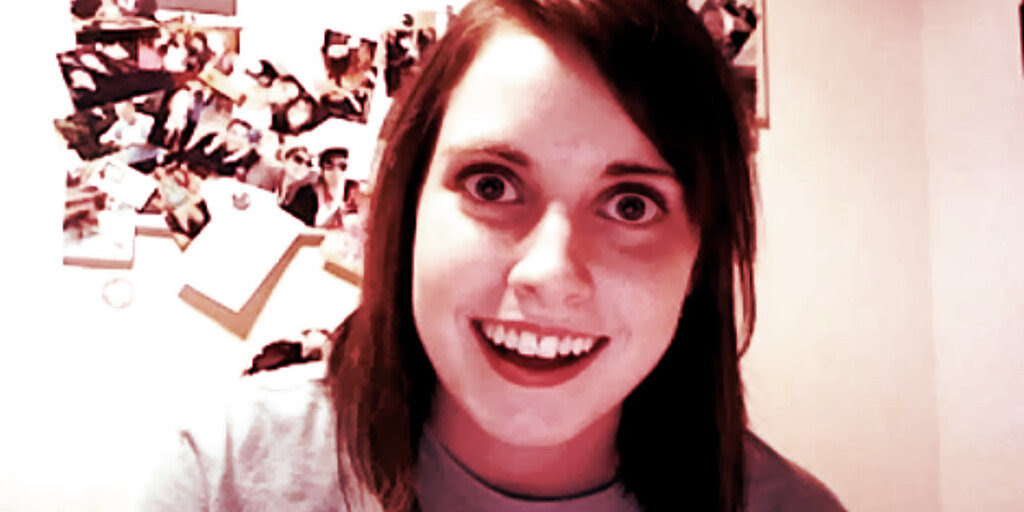 Laina Morris The Internet star who gained fame because of her Overly Attached Girlfriend meme went viral, is today selling an encrypted version of the meme for 200 Ethereum ($411,000).

The person who bought the NFT meme NFT was 3F Music, a Dubai-based music studio that purchased The New York Times' NFT for $560,000 on Thursday.

Overly Attached Girlfriend is a result of Morris's parody video for Justin Bieber's newest song "Boyfriend", uploaded in 2012. Morris's video was watched over 21 million times and featured the meme-like photo of Morris as well as a cute version of Bieber's popular track.

That's all for now! So those are lists of viral memes that managed to earn big bucks as non-fungible tokens. You are are interested in NFT Memes, know more about NFT Marketplace. Be sure to check back soon for more updates on the world of NFT memes!

Let us know your view about those NFT memes and the future of this industry in the comment section.