WTI crude spikes and hit $58. However, there is a new report that the perpetrators of the Saudi Oil attacks have been discovered. The following also includes technical analysis of the Brent and WTI.

November 26, 2019 | AtoZ Markets - Oil prices have gone higher to hit new 8-weeks high. The gradual surge since the first week of October has somehow continued despite last week bearish break below the corrective channels. In the last 7-weeks, Oil prices have increased by 14%. The slow surge still looks corrective but the bearish trend between September 17 and October has failed to re-establish itself. We can now expect WTI to hit $60 per barrel while the Brent about $65 per barrel.

In a special report published by Reuters, the perpetrators of the September 14 attacks on Saudi's Aramco Oil facilities have been revealed. The investigation has uncovered an Iranian Coalition was responsible for the attack which saw Saudi Arabia lost nearly 50% of its Oil production (about 5 million barrels per day) and 5% of the world's total supply. The report which was published on Monday included that the preparation for the attack started in May before Supreme leader Ayatollah Ali Khamenei gave the order for the attack after several meetings. There are also concerns that this might not be the last attack in the nearest future. Meanwhile, the Iranian government has denied its involvement in this attack.

This news may lead the US to increase its sanctions on Iran. Together with a possible retaliation from Saudi Arabia, we might be heading to an Oil war which will most likely keep global supply lower and hike Oil prices. After a minor dip from $58.5 to $57.11, WTI has recovered slightly to $58.2. Brent, on the other hand, is trading around $64 after a minor dip to $63.

The price pattern since October 3 has been corrective. In the last update, the bearish run from mid-September was expected to resume. After the breakout, we expected a minor bounce to $56-59 before the bearish trend continues. However, the bullish correction continued and swept the $58.17 high. 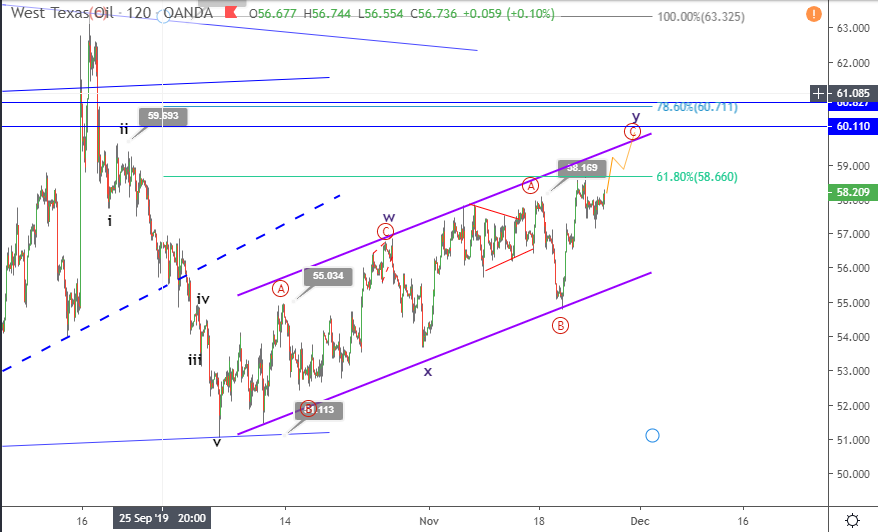 The price is still slightly below the 61.8% Fibonacci retracement level. A break above the level should happen soon. However, there might be another sharp decline at prices between $59 and $60. The same price pattern is seen on Brent crude chart.