The Oil prices have been in bullish corrections for over a week. WTI Crude Oil could hit $55 before the larger bearish run continues. This WTI Crude Oil analysis is based on the Elliott wave theory.

October 09, 2019 | AtoZ Markets – Ahead of important events this week, Oil prices have continued the bullish correction that started earlier in October. WTI is returning from $51.8 and currently trading slightly above $53. Further rallies above the $54 intraday resistance level could happen. However, the bigger picture is pointing downwards below the $51 support level.
It’s going to be another big week for the financial markets. The US-China trade talks will start on Thursday. All eyes will be on Washington to see if the long trade war will finally end and what agreements are made. The Federal Reserve will also update its monetary policies and interest rates today hours after the weekly Crude Oil inventories data is released. Oil prices are pushing upwards but the move looks corrective and the overwhelming bearish run might continue.

Resistance Levels: $63.5 and $66.6 remain the nearest resistance levels. If the price breaks above these levels we should see a hit of $70. However, price is currently far from these levels.
Support Levels: $50.6 and $42 are the near-term support levels. The WTI crude price dropped close to this zone last week. However, it bounced and has continued a minor corrective rally.

In the last update after the US Oil broke below a major rising trendline, we expected a dip toward the $50-51 support zone. We used the chart below. We had similar expectations for the Brent Crude Oil 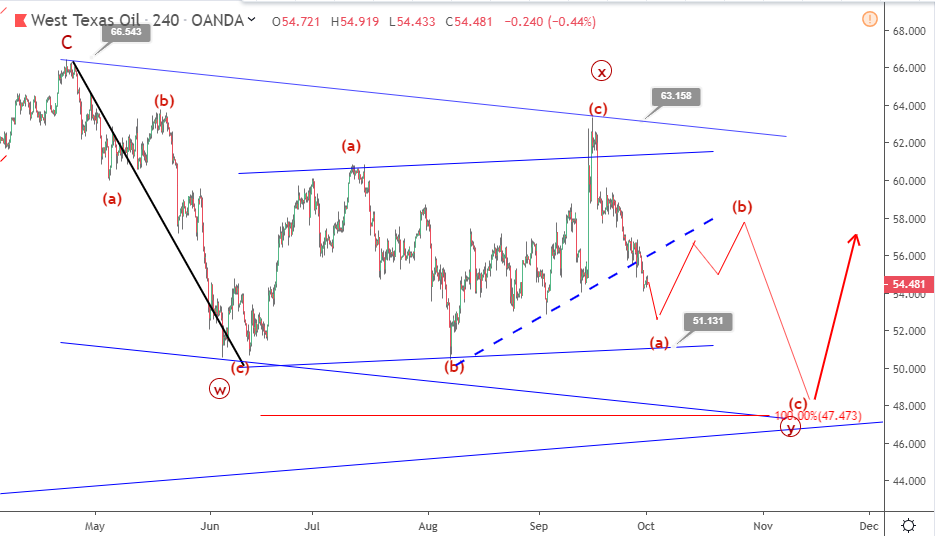 The dip from $63 went lower and hit the support zone as expected. How high will the current bounce go? Let’s look at the most likely scenarios. The larger bearish corrective forecast to $45-47 is still intact. 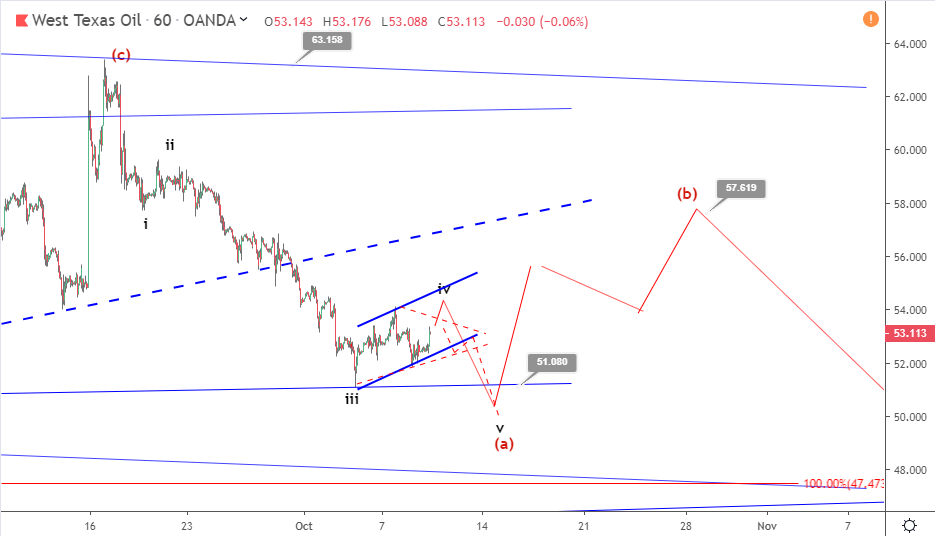 However, from a lower degree, according to the new chart above, we might see another dip to $50 or below to complete impulse wave (a). A bullish correction toward $55-57 could follow afterwards to complete wave (b) before another slump to the $45-47 bearish target zone. At the end of this week, we sill see how Crude Oil will react to all these events.
Tags Elliott wave analysis WTI Crude Oil Price