8 December, AtoZForex – The day’s trading session could take its signal from the European Central Bank’s Governing Council meeting on monetary policy. The ECB President Mario Draghi set to shawl up with a news conference at 8:30 a.m. Europe’s central bank has an $86.06 billion per month asset-buying or quantitative expedition.

Markets generally expect policymakers to keep policy easy by outspreading the program by six months. Also, at the time when U.S. interest rates are mainly expected to rise over the coming year. The market is specifically watching for guidance on where European rates are headed.

The Nasdaq composite surged more than 1 percent but failed to make a new high, closing at 0.2 percent of its all-time intraday high. The S&P 500 and Dow Jones industrial average jumped to close at records, up more than 1 percent in their best day since Nov. 7. The S&P 500 surged 29.12 points at 2,241.35, with telecoms leading all sectors higher except health care, which fell on the Trump comment to bring drug prices down.

Oil also settled lower, fell more than 2 percent to settle at $49.77 a barrel on renewed concerns about oversupply. Treasury profits were slightly lower on the day, with the 2-year yield near 1.10 percent and the 10-year yield around 2.35 percent. Furthermore, the iShares Nasdaq Biotechnology ETF (IBB) declined 2.9 percent in its worst day since Oct. 11. 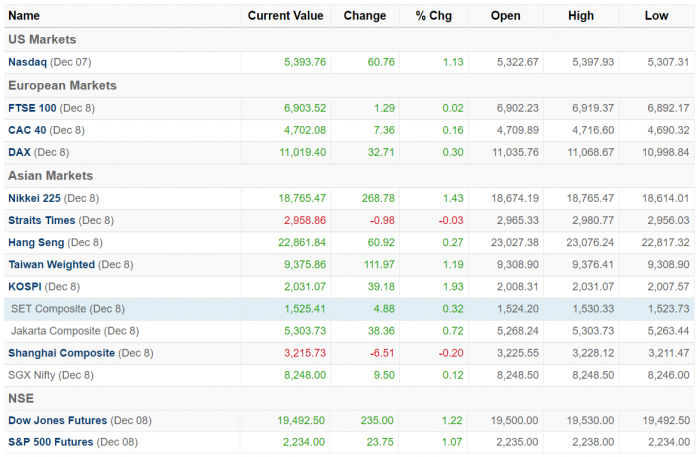 The euro unpredictably strengthened against the U.S. dollar after the preliminary referendum result, holding near $1.076 in late trade Wednesday. The STOXX Europe 600 Bank index surged more than 7.5 percent for the week, tracking for its best since April this year. The gains in European stocks has supported U.S. stocks.