In 2018, major stock markets in the world have posted negative returns. Nasdaq, Dow Jones and S&P 500 saw their prices plummeted.

January 04, 2019 | AtoZ Markets - The stock markets worldwide have recorded negative returns. After a record breaking bullish runs in 2018, the stock markets could not consolidate on an earlier gains across board. The 4th quarter of the year was particularly bad as a sort of financial crisis rocked the markets.

In the US, S&P 500 recorded a net 6% loss after a 6% gain in January 2018 and an overall 9% gain in the first three quarters of the year. The last quarter of the year saw prices plummeted by nearly 15% to drag the market to a negative end of the year. The October sell-off continued till late December before a bit of rally which has continued in 2019. The Dow Jones followed a similar path after dropping a net 5.6% at the end of 2018.The market sentiments going into 2018 was bullish as 2017 was particularly profitable for these indexes. NASDAQ also dropped 3.9% in the same year. After the FED hiked rates in December, there was a widespread concerns of an economic slowdown in 2019.The Fed's monetary policies in the last quarter of 2018 have also been questioned. 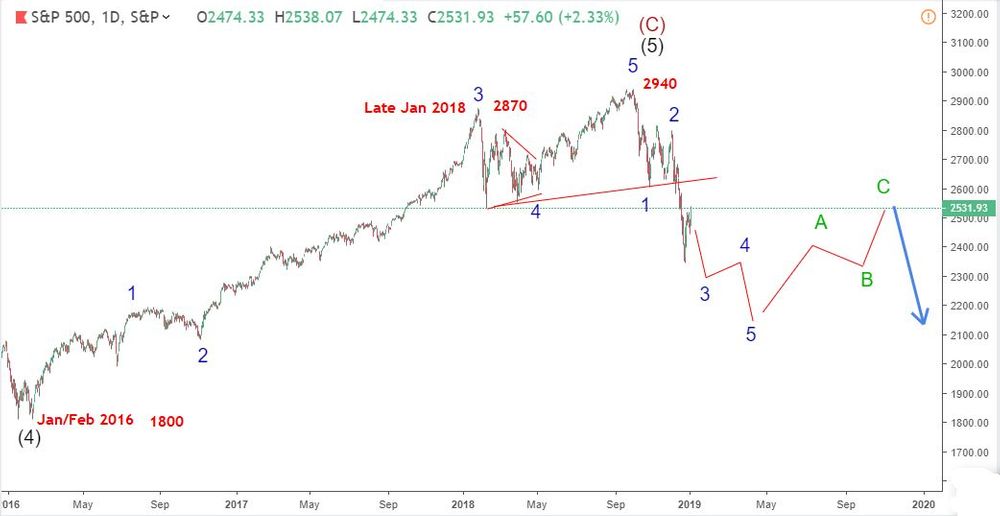 From late January 2016 to late January 2018 ( a period of 2 years), S&P continued the multi-years buoyancy with a 60% gain to hit 2870. From Elliott wave theory perspective, price was nearing a top after completing the 5th wave of the very long term bullish impulse wave. From the 2nd quarter through early 4th quarter, price printed a popular chart reversal pattern – head and shoulder. The stock index finally dropped and from the chart above, it seems a 3-wave bearish correction at least would be seen downside. The 3-wave correction might continue to 1800 where the 4th wave ended. 2018 losses might continue and even turn bigger during the larger part of 2019. Similar price patterns can be seen in other indices like the NASDAQ and Dow Jones. What about the Europe and Asia markets.

Markets in London didn't do any better. The FTSE 100 index posted a 12% decline. 2018 started on a bearish note as the index dropped 910 points to hit 6860 in March. Between March and May, price rallied to hit the all time high at 7860 but the trend couldn't be sustained. From 7860, a new bearish wave which lasted for the rest of the year to break below 6800 support. The chart below shows this bearish move might continue in 2019. 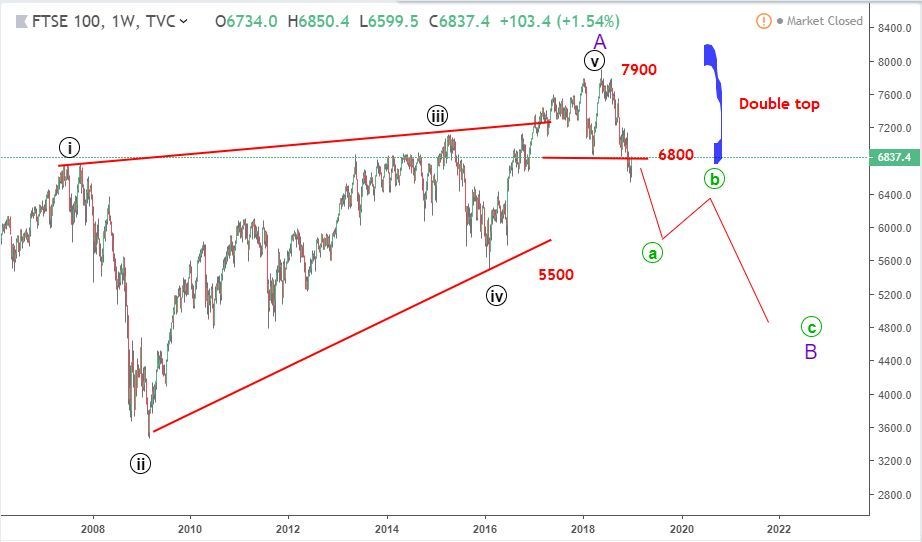 After completing a long term diagonal pattern which started more than 10 years ago, a 3-wave correction might continue downside. Just as in S&P 500, FTSE also printed a reversal pattern just at the top – a double top pattern with neckline at 6800. After breaking below 6800, price is retracing back to re-test it. It seems the first quarter of 2019 will continue bearish with a minimum target of 5500. German stock market has moved in similar direction. DAX, which was one of the worst hit, dropped 23% in 2018 and looks likely to drop more in 2019.

The Asian markets also took big hits. The Chinese stock market took the worst hit with CSI 300 Index dropping 27% in 2018. The long trade dispute between US and China has been said to have contributed hugely to this. Japan's Nikkei index lost about 12% while the Hong Kong's HSI index lost 13.6% in the same period. The bearish trend might continue in 2019 especially if the US-China trade war resumes after the 'cease fire' truce.

Best Australian Based Forex Broker in 2021

Bakkt Receives BitLicense from NYDFS Ahead Of App Launch
Forex Crypto
Top 5 Forex Brokers
Top 5 Crypto Exchanges
Your subscription could not be saved. Please try again.
Thank you for subscribing. You will be the first to receive all the latest news, updates, and exclusive advice from the AtoZ Markets experts.
Everyone is reading
SEC Lawsuit Against Ripple May Drag On Until 2022
Ethereum Facing Support Around $2,300 Price Area - Will Strike Upward?
Danske Bank Rejects Cryptocurrency Trading
close ×