May 6, 2019 | AtoZ Markets – Litecoin price might increase in the coming months due to its scheduled halving in August 2019. Will we see Litecoin halving rally in 2019?

Today, Litecoin is considered by crypto traders to be one of the top assets with a triple profit. Nevertheless, it is noteworthy that Charlie Lee – Litecoin creator,  liquidated most of his LTC funds at the peak of the super-rally at the end of 2017.

In addition to selling off most of his LTCs, Lee urged Litecoin holders to invest if they are ready to a 90 percent plus drop.

According to Lee, Litecoin (LTC) and the cryptocurrency market as a whole have fallen, since the alt-coins have lost more than 85 percent of December 2017 prices. However, to date, Litecoin is one of the few cryptocurrencies that continues to recover its position.

Although Charlie Lee now admits that he thought the coin would grow to $ 1,000, the hash rate of the coin improves every day. The revival of Litecoin (LTC) could be explained by several reasons. One of them is the rise of bitcoin prices.

Because they have a positive correlation, the growth of the former average Litecoin will expand. However, in early August, reducing Litecoin’s share may double the demand for an asset, as investors prepare for a deficit.

What is Litecoin halving?

Halving is called a process when the miner’s reward is halved after a predetermined block in the blockchain. So-called “halving” feature was first time added to the bitcoin blockchain by its alleged inventor Satoshi Nakamoto. Its main purpose was to protect the bitcoin’s value from inflation, and ensure that not all the blocks are mined so soon.

In the case of the Litecoin’s halving, this alt-coins mining reward is expected to go down at a predetermined block.

Why halving such a big deal?

It is worth to mention, that halving doesn’t just concern miners but investors as well.

The halving complicates mining, as the number of blocks, mined decreases. This means, more resources have to be spent on the mining equipment. At the same time, mining rewards are decreasing.

To cope with a decrease in mining rewards, the Litecoin price also increases. Although miners see that their mining remuneration decreases, the total value of the asset increases. Half is a 50% reduction in reward after a certain number of blocks have been mined, and a block reward is the number of coins received by the miner as a reward for successfully extracting the correct block.

Litecoin in a brief

Litecoin was developed by Charlie Lee in  2011 as a decentralized open-source cryptocurrency. Litecoin served as a testing ground for Bitcoin in the implementation of Segwit, and now Lightning on Bitcoin blockchain. This alt-coin is one of the most widely used cryptocurrencies and one of the best cryptocurrencies for mining.

According to the experts, this is one of those cryptocurrencies that will survive in the next 5 years. Litecoin supported an average of 25,000 transactions per day over the past 12 months, which is a significant achievement and evidence of its use.

Litecoin block reward halving could go on forever, but upon projections, it shows it will be over around the year 2150. Litecoin just like Bitcoin has been advancing into a simple impulse wave structure. As we have shown in our past LTC technical analysis updates, the price completed the 4th wave just below $70 and in a falling channel from $99. The 5th wave is expected to advance to $109 resistance price level or even further as explained in the last update. 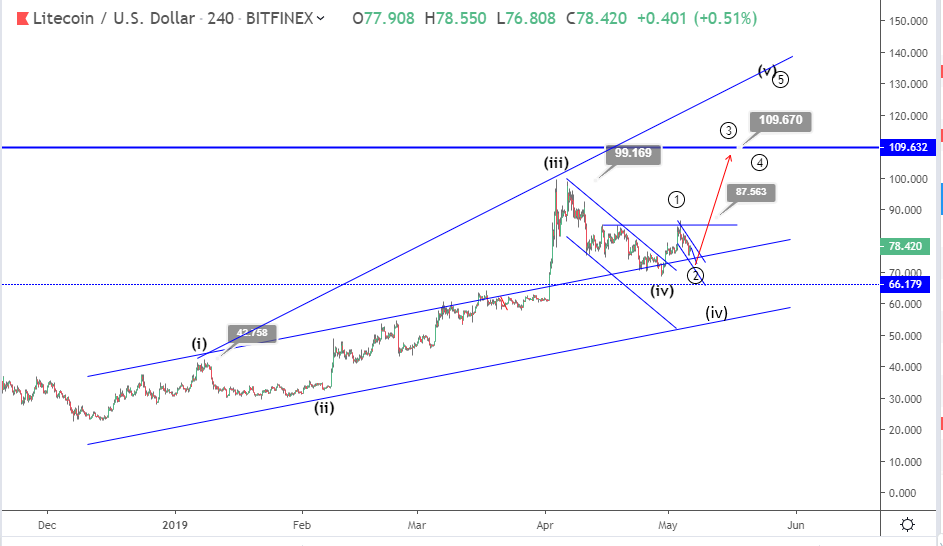 We expected a break above $85 to confirm the start of the 5th wave but the current rally so far lacked sufficient momentum to break above. If that eventually happens, a break above $99 is expected as the chart below shows.

At the end of the impulse wave, a corrective should follow to retest 65-75 price zone before further rallies. $1000 is quite possible, but it will take some time to achieve as the market awaits the right fundamentals to fall in place.

What do you think? Should we expect Litecoin halving rally in 2019?