Will gold prices continue to rise? This question arises in minds of investors, as the weaker USD gives yellow metal a room for improvement.

19 December, AtoZForex – Gold prices are still rebounding for the second straight session from last week lows. Last week, the yellow metal has hit 10-1/2 month low in the wake of the Federal Reserve’s (Fed) decision to increase the interest rates across the US by quarter percentage.

Will gold prices continue to rise?

After making a low of $1123 on 15th of December, Gold trend has been on bullish correction in the end of the working week. Despite the bullish move during the early hours of last Friday Gold still remained near its lowest level since February 2016.

Currently, spot gold is trading around $1140 region. It has advanced in spite of USD strength after recording six straight weeks of loss. The dollar has lost its steam today, sliding from 14-year peak against the basket of six major currencies, which it has hit last week.

While being highly sensitive to rising rates, bullion might be further pressured by the prospect of faster interest rate hike pace in 2017. Moreover, a further cut in the Hedge fund and money managers’ net long positions for the fifth consecutive week may also weigh on gold’s recovery.

What is next for bullion?

Spot gold gained 0.7 percent to $1,141.61 per ounce by 0651 GMT. US gold futures advanced 0.6 percent to $1,143.60 per ounce. Analysts believe that the yellow metal has found the base. Yet, Australia and New Zealand Banking Group states that the rally will be capped, as investors will be looking to other markets for yield. Sanmi Adeagbo, Market analyst at AtoZForex, has stated:

"The bearish trend in Gold has not shown any sign of exhaustion yet, at least, until price breaks above 1165 technical level. A five wave impulse dip from 1335 spike is in the latter stages - subwave iv of 5. The last leg is expected to continue to 1100 psychology technical level before the rally. At 1100 we can expect a major correction that started in July to end.

Only a high momentum bullish drive will see off this strong bearish move before hitting 1100. Without that, the bearish trend is still intact though bullish resurgence is expected. If price goes below 1100 strongly, then the bullish hope anytime soon is weak." 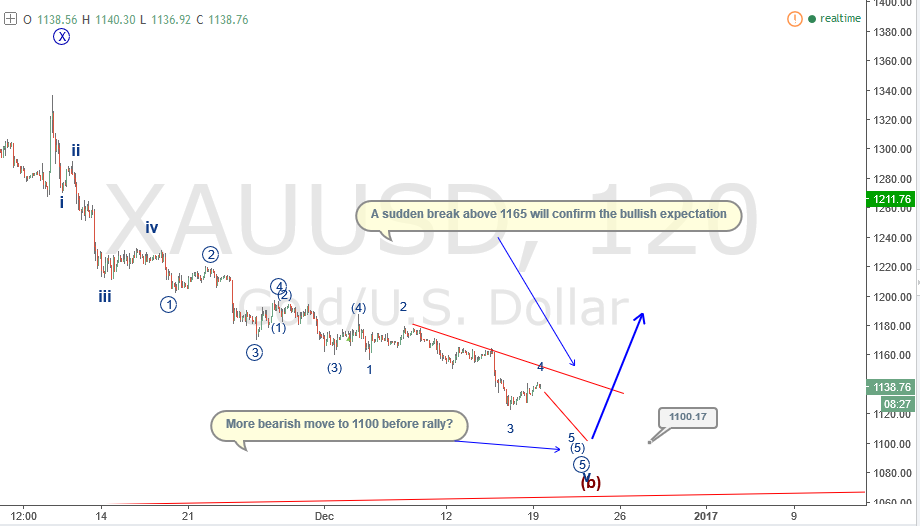