Will Bitcoin price crash in 2021? What are the experts and members of the crypto community saying is the the future prospects of BTC?

February 26, 2021 | AtoZ Markets – After updating the all-time high at levels above $58,000, the Bitcoin price began to decline rapidly. This was facilitated by both the statements of famous personalities and the technical correction associated with the profit taking after the rapid growth over the past few weeks.

Acceleration of the downward movement gave the liquidation of open interest in long, the total volume of which exceeded $4 billion. This led to a fall in the price of the first cryptocurrency below the level of $45,000, from which buyers began to catch the asset.

Will Bitcoin price crash in 2021? Considering the future prospects of the first cryptocurrency, it is important to note what members of the crypto community are saying.

Will Bitcoin Crash in 2021? What Members of the Crypto Community Think

Every day, new Bitcoin predictions appear on the network. Some see the prospects for the cryptocurrency to go into active growth in the near future, while others expect the BTC to crash to zero. 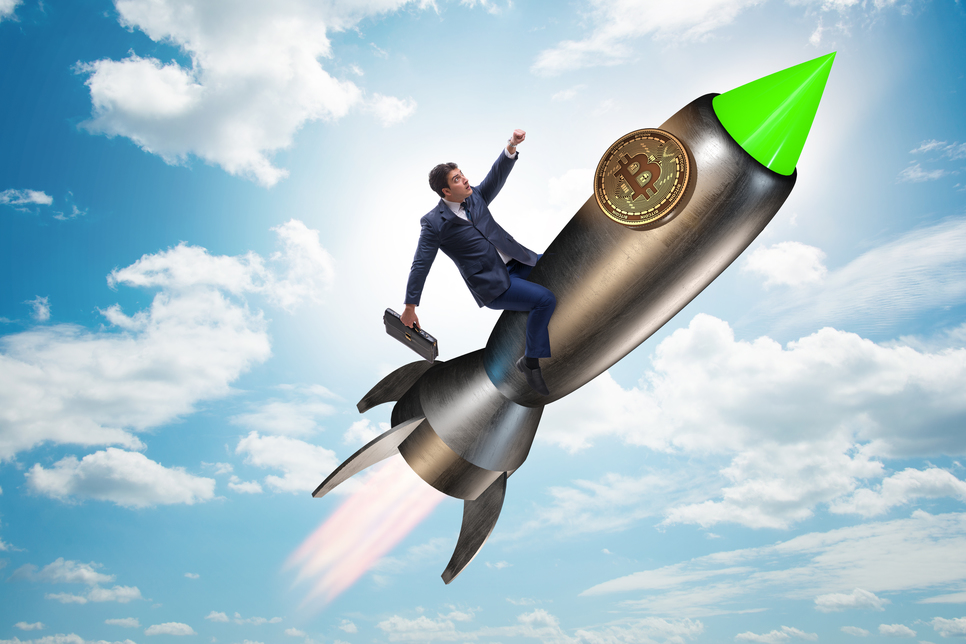 Among the positive forecasts, the following can be distinguished:

Bitcoin broke quite a few records in 2020, but 2021 could be even more successful for the first cryptocurrency. This opinion was expressed in an interview with CNBC by Thomas Lee, co-founder of Fundstrat Global Advisors.

Lee, a member of the Board of Directors of the Bitcoin Foundation, believes that the price of bitcoin by the end of 2021 will be able to see a "parabolic" rise to $90,000 to $100,000. In particular, Lee cited the example of the halving of 2016, which was followed by a record rally in 2017. According to him, the cutback to bitcoin miner rewards in 2020 suggests a repeat of the bullish scenario.

Bitcoin price could rise to $100,000 by the end of 2021 if other companies follow the lead of electric car manufacturer Tesla. The founder of the cryptobank Galaxy Digital, Mike Novogratz, said this in an interview with Bloomberg.

The billionaire called Elon Musk a genius in his decision to listen to people and evaluate the interests of young people. In his opinion, other organizations will invest in the first cryptocurrency to hedge inflation risks.

"You will see every company in America start doing the same," said the billionaire.

Raoul Pal, co-founder and managing director of Global Macro Investor and Real Vision, predicts that Bitcoin will climb to $150,000 by November 2021, even calling this a "conservative" estimate. Rather, he assumes that the market-leading cryptocurrency will even rise to $250,000 by then, as more and more institutional investors enter the market.

As Pal explains, large companies such as Square, Microstrategy, and Grayscale are currently buying up all newly created units of Bitcoin immediately, which creates a shortage that in turn leads to a price increase.

Although the covid-19 vaccines could soon normalize global economy again, it will probably need further financial aid packages beforehand. These financial injections, however, devalue local currencies, which, in combination with negative interest rates, could lead to more and more investors fleeing to Bitcoin and driving the price up, Pal said.

Guggenheim Partners' investment director Scott Minerd has revised his previous outlook for Bitcoin's long-term outlook. In an interview with CNN, he said that the price of the first cryptocurrency could rise to $600,000.

According to him, the participation of institutional investors in the market is growing, but this is still not enough to maintain the current level of the Bitcoin price. The expert added that the cryptocurrency has earned respect in the market and will continue to play a large role in the global economy.

Former US Treasury Secretary Lawrence Summers said that "bitcoin will not collapse", its price will continue to rise in the long term.

“The cryptocurrency looks much more resilient after the price set a new record and then declined,” he said.

Summers believes that the reason for the continued growth of bitcoin will be an increase in demand with a limited supply of coins.

Luke Lloyd is an outspoken Bitcoin bull when it comes to his long-term outlook. However, he has found from his technical analysis of bitcoin that the coin is due to drop to $24,000. But after the drop that Lloyd expects, he believes Bitcoin will recover and rise all the way to $100,000 by around the end of 2021.

Bitcoin would have to rise about 545% from the current price to break above $100,000. At that price, BTC's market capitalization would approach over $2 trillion, or roughly the same as Apple, the world's most valuable company. 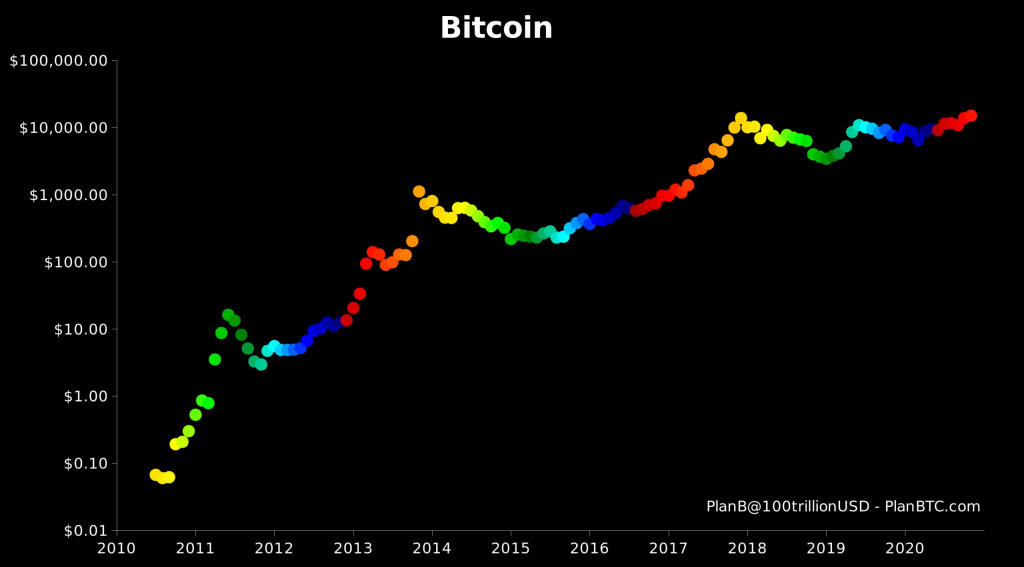 Why $100,000 in 2021? The S2F model attempts to predict the long-term price trend of Bitcoin by evaluating its offer. That is, it takes into account your fixed supply and the halving of the reward per block, which reduces the rate at which a new BTC is mined.

The theory behind S2F is that as the supply of Bitcoin decreases over time, inflation will continually increase. In theory, these two factors could amplify the uptrend of the main cryptocurrency.

Based on the Bitcoin supply curve and halving cycles, S2F places the expected valuation of BTC at $5.5 trillion. The model predicts that Bitcoin will reach a valuation of several trillion dollars before 2024. The model  says:

PlanB said it remains confident that the S2F model's $100,000 price projection for Bitcoin would materialize.

Of course, not everyone agrees with the above positive forecasts for the further movement of the Bitcoin price. 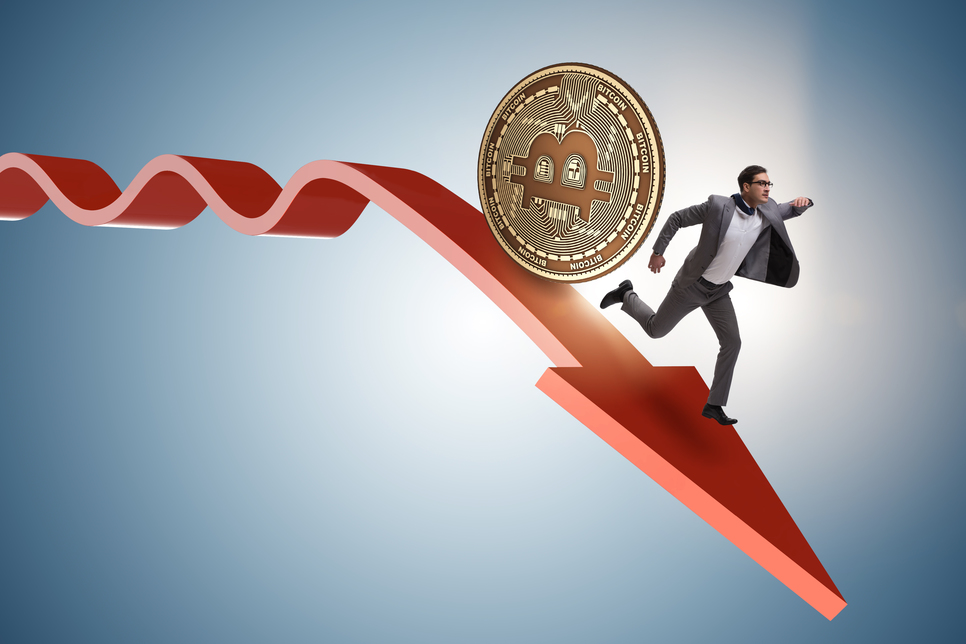 There are bears who continue to be exasperated at Bitcoin’s performance. One of them is Anton Wahlman.

According to Wahlman, the idea that BTC is worth anything at all is absurd — setting a rather harsh price projection of zero. He wrote:

“Sometimes there's something so absurd that you hardly know where to begin to make the argument, for it's so obvious and self-evident that it should not have to be explained. Bitcoin and similar cryptocurrencies are such a case.”

Billionaire and follower of Warren Buffett's methods in India, Rakesh Junjhunwala, is convinced that the "bitcoin party" will end in disaster for its participants. He stated this on the air of CNBC.

“For me, this is high-class speculation. I don't want to join every party in town. The hangover will be hard,” the investor predicted.

The interview took place on the eve of a strong market decline on February 23. On this day, the price of Bitcoin reached $45,000 , and the capitalization of the first cryptocurrency fell below $900 billion.

Nouriel Roubini, economics professor at Stern School of Business, NYU is not a fan of Bitcoin.

“Since the fundamental value of bitcoin is zero and would be negative if a proper carbon tax was applied to its massive polluting energy-hogging production, I predict that the current bubble will eventually end in another bust,” Roubini wrote in an opinion column for the Financial Times.

Anybody that claims to ‘know’ whether Bitcoin price will rise or crash is a liar. Sorry, but that’s the truth. There is no universal point of view, from which members of the crypto community could build an accurate forecast of the movement of the Bitcoin price.

Many respected experts see the upside potential for Bitcoin rather than a crash because institutional investors are piling into crypto like never before.

However, some experts believe that the value of the coin will plunge in 2021, during which investors will have the opportunity to profitably purchase the coin.

So before investing in Bitcoin, you should do further research and always speak to a financial advisor. Never invest more than you can afford to lose. Bitcoin is still young and the price is always changing, so things sometimes happen that nobody can predict.

Note: The forecasts presented are not investment advice. The choice of cryptocurrency for investing funds must be done independently, after your own analysis.