Technical price patterns showing on Ripple suggest it could plummet to10 cents if a breakout happens downside.

March 12, 2019 | AtoZ Markets – Ripple has been one of the least gainers in the current cryptocurrency rallies. Since price recovered to 44 cents late December, it has gone downside struggling between 32 cents and 29 cents. During this time, EOS and Litecoin hit above their January highs while Bitcoin and Ethereum have gone close and Stellar Lumens gained 35% last week. Ripple has just remained silent with no clear short-term direction to point to. XRPUSD has gone sideways and completing a triangle. Such silent moves are usually followed by a big breakout in, more often than not, the direction of the preceding trend.

How Ripple compares with other top 5 since late December

Despite the lack of volatility, Ripple remains the 3rd top ranked crypto on coinmarketcap. However, its market capitalization and trade volume have plummeted since December when the current crypto rallies started across the board. In less than three months, Ripple’s market capitalization has dropped by 26% from $17.4 billion in late December to the current $12.4 billion. There has been less demand for Ripple in the same period as its trade volume plummeted while cryptos like Litecoin, EOS and Stellar attracted more attention.

XRP trade volume dropped by nearly 60% from $1.397 billion to $569 million in less than three months despite the bullish market. In the same period, Bitcoin, Ethereum, Litecoin and EOS were more demanded as their trade volumes increased by 51%, 28%, 194% and 30% respectively. Their prices also gained significantly.

Since the beginning of the year, the crypto market has been driven mainly by day-to-day speculative sentiments. The market, from a technical perspective, could resume the sell-off. There are bearish patterns printing on the price charts of Bitcoin and the major altcoins like Ethereum, Litecoin and EOS. Bitcoin failed to break above 3900 after many attempts but the larger market sentiment is still bearish. Despite Litecoin doubling this year, bearish patterns are still seen clearly on its price chart. Same can be seen on Stellar after gaining 35% last week. If the sell-off resumes, what is the next bearish target for Ripple? 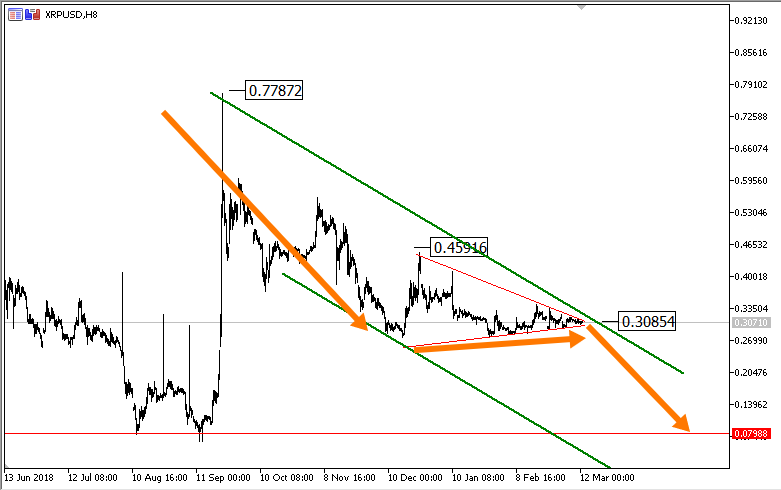 After dropping to 30 cents from 77 cents, Ripple has gone sideways to complete a triangle pattern. The bearish pressure is still overwhelming but the bulls are holding for now. A break below will eventually happen to 10 cents. This cannot be cast on a stone as the market could surprise with a bullish breakout instead. However, the odds favor the bears for now.