Litecon has become the 4th biggest cryptocurrency in the world by market cap, leaving IOTA behind. Following the CBOE Bitcoin futures launch, Litecoin price has seen a record high. Why Did Litecoin Price Soar 50%?

12 December, AtoZForex – The fourth largest cryptocurrency in the world by market capitalization, has been advancing its position following the CBOE Bitcoin futures trading launch.

In fact, Litecoin has risen more than 50% to now trade at around $247, according to the data from Coinmarketcap. The coin has just surpassed IOTA by market cap, leaving the innovative cryptocurrency behind.

Why Did Litecoin Price Soar 50%?

The Litecoin price gains appeared a day after CBOE Global Markets, a Chicago based exchange operator, has launched the trading of Bitcoin futures contracts. The front-month contract has opened at $15,460 in New York yesterday evening, just to surge to the high of $17,170 during the Asian session. The futures contracts have posted $17,120, which accounts for more than a $1,000 premium to the price on Gemini exchange.

Once the Bitcoin futures contract trading has been launched, the CBOE’s website has immediately crashed. The website of the Exchange has become unavailable at 6 p.m. EST on Sunday. In fact, CBOE’s website downtime has coincided with a sudden surge in the Bitcoin prices.

According to the data available online, Bitcoin price has spiked from $14,509 at 22:59 UTC to $15,732 at 23:06 UTC. The CBOE has accompanied the launch of Bitcoin futures with the special Tweet, which has most probably caused the spike in Bitcoin value.

In fact, the creator of Litecoin Charlie Lee has made a public appearance this Monday. This might have contributed to the rise of interest in the famous cryptocurrency. Last week, the Litecoin price has seen a loss following the GDAX exchange crash. That time, the value of Litecoin has dropped below the $100 level. 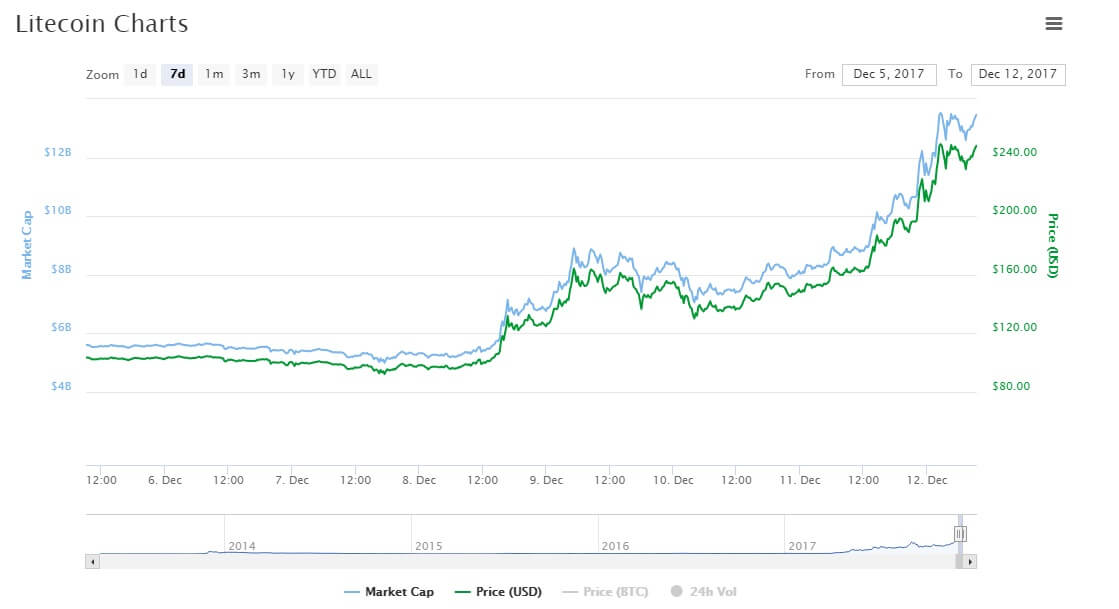 Litecoin utilizes a slightly different mining technique than Bitcoin. Also, the cryptocurrency has been somewhat left out of the overall digital currency trend explosion – until now.

Surpassing the IOTA in terms of market cap marks the first time Litecoin having the 4th place in the world by market capitalization.