Anyone keeping an eye on the cryptocurrency markets will be acutely aware of the bearish market sentiment that plagued the markets for the better part of 2018. This negative market sentiment is oftentimes referred to as the ”crypto winter”, seeing as it constituted a significant market cool-down compared to 2017 explosive price rally. Now, however, it seems that the cryptocurrency winter might finally be thawing.

The daily volume of bitcoin price has been recorded a 3-month high today of more than $11 billion. Ethereum price also went up to $152 mark which is also a monthly high before correcting downwards and is up by more than 5% on the daily chart. Also, Ripple has also experienced a slight upward move to around $0.3325 mark. 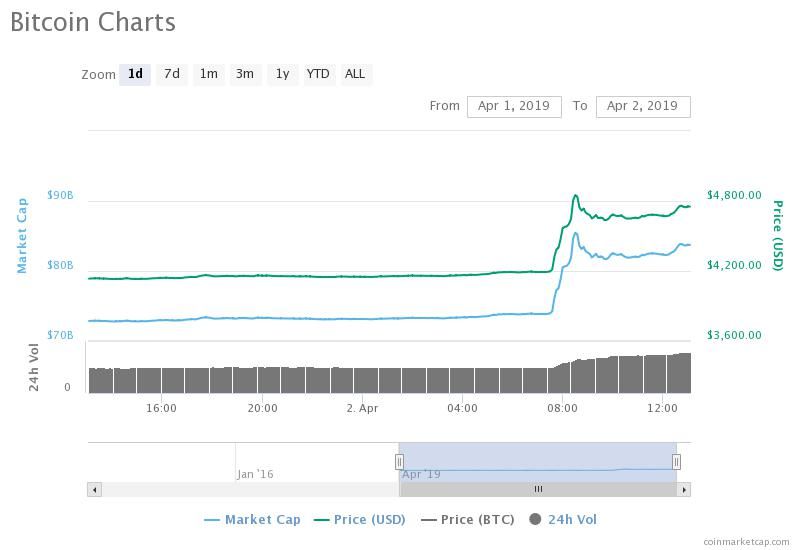 The total cryptocurrency market cap currently stands at around $161 billion and is up by around 3% from the last 24 hours according to data from coinmarketcap stats. Interestingly, the 24 hours trading volume is moving towards a yearly high and approaching $40 billion which indicates that there might be a drastic move in terms of the price of bitcoin and other top cryptocurrencies.

Economist and global markets analyst Alex Kruger also believe that bitcoin price movement above the $4,200 level will mark the end of the bear market beginning January 2018.

“This is not a call. Not a matter of aging well or not. A break above $4,200 technically ends the bear trend that started Jan 2018. Facts don’t care about opinions. If strong selling resumes later, that would represent a different trend.”

The Bitcoin price momentum from breaking the crucial $4,200 resistance level at once led BTCUSD to break out various resistance levels, which many analysts predict could go to as high as $5,500 in the upcoming days.

BTC dominance is above 50%

The Bitcoin dominance, which is the BTC share over the crypto markets, gets to 50% for the first time in months. There were two options – either Bitcoin will skyrocket from here, or else drops severely to cause the altcoins to fall even more. As you could see, the cryptocurrencies had chosen the first option. At press time, the current BTC dominance is 51.6%.

Bitcoin price started a bull rally and moved above $4850 mark on the technical chart before starting to correct downwards. BTC is currently facing strong resistance around $4800 which might lead to a downfall. However, BTC is well supported around $4000 and it might fall somewhere around this range in the short term before starting to rise again.

Bitcoin should settle above $5000 mark for the bull run to continue their action. On the downside, if Bitcoin price moves below $4700 support, it might test $4200 and $4000 support level below which it might turn bearish again.

Crypto Traders Lost $1 Billion As China Cracks Down on Bitcoin
Forex Crypto
Top 5 Forex Brokers
Top 5 Crypto Exchanges
Your subscription could not be saved. Please try again.
Thank you for subscribing. You will be the first to receive all the latest news, updates, and exclusive advice from the AtoZ Markets experts.
Everyone is reading
Can Ripple Break Below $0.55 Significant Event Level?
Ethereum Facing Support Around $2,300 Price Area - Will Strike Upward?
Danske Bank Rejects Cryptocurrency Trading
close ×