Ripple has remained sideways in the last ten weeks. A breakout will eventually happen – upward or downward.

March 15, 2019. | AtoZ Markets – Ripple looks much less convincing in the best part of the last three months than any other cryptocurrency in the top 10. The 2nd largest altcoin has maintained a sideway formation with low volatility and dwindling daily volume. Ripple was listed by Coinbase on its advanced Coinbase pro platform on 25th January but that has not added much momentum to the crypto. Though price rallied a bit swiftly but quickly dropped and has remained locked up between 30 and 33 cents since the announcement. Ripple currently exchanges for 31 cents with market capitalization and daily trading volume of $13 billion and $723 million respectively.

From a broader market perspective, cryptocurrencies are back in the usual ‘hibernation’ mood awaiting the triggers for the next direction. All coins have barely moved today though the total market cap has increased from $133 billion we saw in the last few weeks, to $136 billion. The $3 billion added, is probably as a result of more demands for EOS, Litecoin and Stellar which have taken them to the top of the gainers’ table.

Despite the current slow activities on the Ripple price chart, it still maintains its 3rd position in terms of size according to Coinmarketcap. XRP has 9-10% share of the total market cap and combined with Bitcoin and Ethereum, has 70% of the entire market value. Going to the weekends, a large 10 weeks long triangle pattern is forming. Another huge breakout is at the corner. Will it be upside or downside?

Crypto traders who use technical analysis are very familiar with triangle patterns. Many of the big moves we saw since crypto prices are represented on charts, were preceded by the triangle patterns. These patterns show a characteristic silent period ahead of a storm. The biggest triangle so far happened between February/March 2018 to November 2018. After the bearish breakout in November, most cryptos hit their lowest prices of that year. Is the same thing happening? 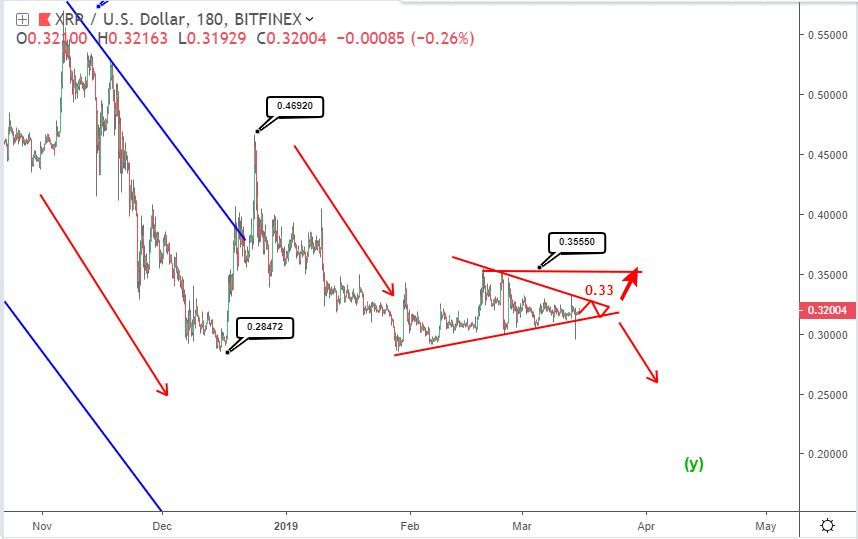 After the November bearish breakout, Ripple price stayed above the 2018 low of 24.6 cents recorded in mid-August.  The rally that followed in December to almost 47 cents couldn’t be sustained as price dipped to retest 28.4 support. Right above 28.4, the price has gone sideways since late January and a descending bearish triangle is completing. Though this pattern is bearish, if price breaks upside above 33 cents, we will most likely see a re-touch of 47 cents. A break below will see price making a new low and its lowest price since August 2018. Until the breakout, the current sideways move will most likely get tighter.

Tags PIVX Ripple price prediction XRP/USD
Forex Crypto
Top 5 Forex Brokers
Top 5 Crypto Exchanges
Your subscription could not be saved. Please try again.
Thank you for subscribing. You will be the first to receive all the latest news, updates, and exclusive advice from the AtoZ Markets experts.
Everyone is reading
Top 5 Forex MT5 Indicators for 2021 you should try
Top 5 Cryptos to Watch in Quarter 2 2021
Bitcoin Facing Resistance Around $60,000 Event Area - What Next?
close ×