Tether has announced a partnership with Tron to launch a new USDT stable coin on the latter's blockchain.

March 05, 2019 | AtoZ Markets – On Monday, two crypto companies, Tether and Tron, have announced a new partnership. Tether will launch the latest version of its stable coin on Tron blockchain. The new coin will be TRC-20 token, a similar version of Ethereum's ERC-20 token. In a tweet on Monday, Tron revealed this latest development on its foundation Twitter handle @Tronfoundation. The company stated how the new stable coin will benefit its blockchain. According to them, the new stable coin will ''elevate our dAPP ECO-system, increase DEX liquidity and enhance accessibility for partners and institutional investors''. In a similar tweet, Tether also confirmed this partnership. 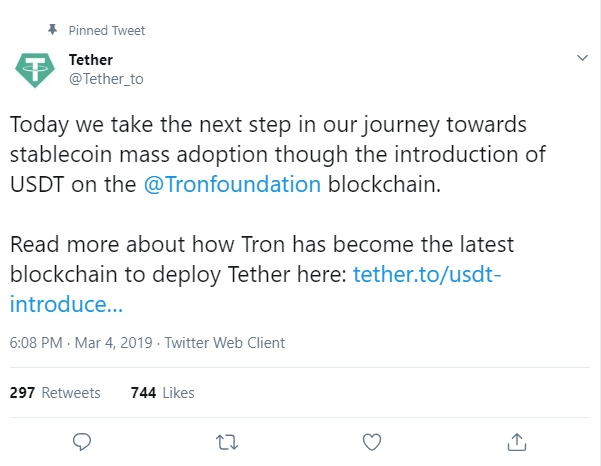 Tether and Tron are both ranked in the top 10 on Coinmarketcap with market capitalizations at $2 billion and $1.5 billion respectively. Tether's USDT is the most famous stable coin in the crypto world and it's valued at $1.01. Tether is accepted by most exchanges to have a value at par with the Dollar. However, there have always been concerns about the true worth and value of Tether as a dollar-pegged stable coin. Is Tether (USDT) really backed by the fiat USD at 1:1 ratio? The company has claimed to have a combined over $3.8 billion in assets and Tether in circulation.

Tether's new partners, Tron, in the wake of the recent agreement, have supported this claim citing a report by Bloomberg as evidence. In December 2018, Bloomberg published its findings to allay fears concerning the rumours that Tether could be a scam. The report, after reviewing Tether's account statements from September 2011, showed that the company has sufficient Dollar to back up its Tether (USDT) token for at least four months from the period of review. One of the bank statements, for example, shows Tether has $2.2 billion in a Puerto Rican bank. The report, therefore, concluded that the fears are unfounded.

Benefits of the TRC-20 token

The new USDT token will be released in the second quarter of 2019 and is expected to enhance liquidity thus making cashing out in US dollars possible. It will make transactions of fiat-pegged coins possible across the blockchain. According to Tron founder, Justin Sun, the new partnership will enable easy access for partners and institutional investors thereby bringing stability and confidence to users.