What is interest rate normalization? Currently, as the US economy stance is healthier, the era of low-interest rates is coming to the end.

6 February, AtoZMarkets – Nowadays, we are hearing more and more about the normalization of the interest rates. Usually, they are mirroring the interest rates on the government securities, which have not been normal in the period of the last few years.

What is interest rate normalization?

Since the financial crisis of 2008, the interest rates in the US have been pretty much in the low territory. As for the short-term borrowing, the borrowing costs set by Federal Reserve have been near zero. For the longer-term borrowing, a government quantitative easing has been holding the 10-year Treasury rate low. As of now, the yield is at 2.496%.

Currently, as the US economy stance is healthier and the inflation levels are increasing, the era of low-interest rates is coming to the end. Market analysts are calling the process is “normalization.” However, they state that now it is not entirely clear what normal means in terms of the borrowing costs. According to the portfolio manager at investment adviser Pension Partners in New York, this “has to be fine-tuned.”

Moreover, Mr. Gayed believes that the normal rates most likely will not be as high as they used to be in the past period. Two decades ago, the 10-year rate for the government borrowing dropped below 5%. In the period prior to the financial crisis, this rate stayed above 4%.

The so-called normal rates will not return to that level because the inflation levels are much that they used to be. According to Mr. Gayed, such conditions are present due to the advanced economic efficiency. He has added:

“There has been a generic shift down on rates due to efficiency. People who talk about rising rates aren’t necessarily understanding the shift in rates due to technology.” 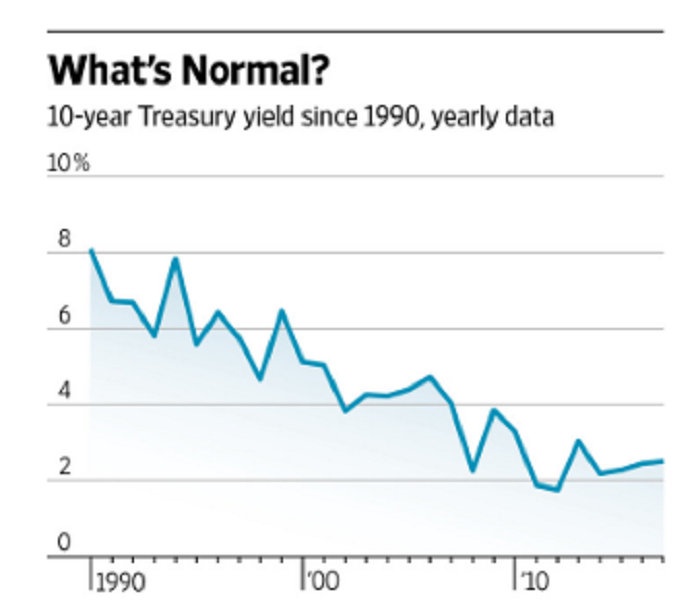 To sum up, the ‘new’ normal rates may not be the ‘old’ normal ones. Analysts believe that such change occurred due to the new technology in the world. It has allowed the economy to advance without surges in prices.