June 10, 2019 | AtoZMarkets – The financial research firm Weiss Ratings has recently announced in its Twitter, that it has downgraded its rating of cryptocurrency EOS, due to the crypto blockchain’s centralization “serious problems”. Notable, that Weiss Ratings downgrades EOS, just a few months after it gave the blockchain firm “A”.

Weiss Ratings downgrades EOS and tweets about it

The U.S. based financial research firm Weiss Rating announced the report on EOS rating results via a tweet published in June. The post says, that EOS was downgraded, because of its “serious problems with centralization.” 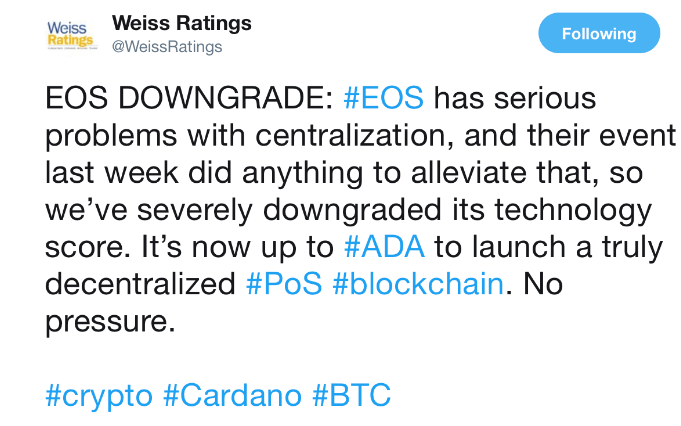 The research company mentioned the recent EOS event, which, according to Weiss Ratings “did anything to alleviate EOS technology score downgrade.” Weiss allegedly was speaking about the event that took place in Washington D.C. when Block.one company introduced its EOS based, social media project called Voice.

Weiss Ratings concluded its announcement with other portion of news, mentioning a decentralized blockchain platform Cardano (ADA). The research firm alluded, that ADA is its next target as this firm is about “to launch a truly decentralized Pos.”

The U.S.-based research agency’s outlook for EOS has changed since then. Now the company states, that Block.one has taken no necessary steps to improve the EOS protocol.

Should Weiss Ratings be trusted that easily?

According to the Weiss Ratings description on the company’s official website, the research firm has been providing guidance to consumers, individual investors, and business professionals toward the best investment, banking, and insurance options since its foundation in 1971.

However, despite such a long company’s history, certain community members doubt Weiss Ratings research results. It is worth to mention, that the previously positive Weiss evaluation of the EOS was followed with the complaints about the centralized nature of the latter.

In addition, a Los Angeles -based performance engineering company for blockchain technologies Whiteblock stated that EOS lacks blockchain’s most essential features, like immutability.

The Whiteblock released its report in November 2018, four months before Weiss put EOS on the top of their best blockchain projects’ list. The blockchain community suggests that Weiss might be ignoring certain fundamental aspects while rating EOS higher than other blockchain projects. In addition, a protocol specialist at Bison Trails

Viktor Bunin stated, that “something like EOS, receiving a higher score than Bitcoin is a clear sign of faulty judging criteria.“ Bunin outlined, that Weiss ratings on cryptocurrencies and blockchain projects are untrustworthy because of the company’s broken and opaque “proprietary” methodology.

As bitcoin price started a major decline below $8,000 against the USD last weekend, the price of EOS and all other altcoins declined. At press time, EOS is trading at $6.47 mark with a total market cap of $6.57 Billion in terms of market cap.

It is currently testing the $7,6 resistance area and the 23.6% Fib retracement level of the last drop from the $7.4 high to $5.92 low. If there is an upside correction, the price could test the $6.9 resistance area. There is also a key bearish trend line forming with resistance near on the hourly chart of the EOSUSD pair. After a correction, with huge volume trading, the pair might test $7,2- $7-5 in upcoming days.

Up or Down? Analysts Disagree on Where Bitcoin Will Go
Forex Crypto
Top 5 Forex Brokers
Top 5 Crypto Exchanges
Your subscription could not be saved. Please try again.
Thank you for subscribing. You will be the first to receive all the latest news, updates, and exclusive advice from the AtoZ Markets experts.
Everyone is reading
Can Ripple Break Below $0.55 Significant Event Level?
Ethereum Facing Support Around $2,300 Price Area - Will Strike Upward?
Danske Bank Rejects Cryptocurrency Trading
close ×