Warren Buffet stock picking is somewhat different from others. As a fact, one hundred dollars invested in Berkshire in 1965 would be value $1.1 million today. Where did he invest in 2016?

1 December, AtoZForex – Fabled investor Warren Buffett, chairman and CEO of Berkshire Hathaway, has led the holding company to outperform. Investors can get in on the Oracle of Omaha's stock-picking prowess by buying shares in Berkshire Hathaway. At the second half of the quarter, Berkshire held shares of 44 such companies, with only 20 accounting for more than 0.5% of its total stock portfolio. 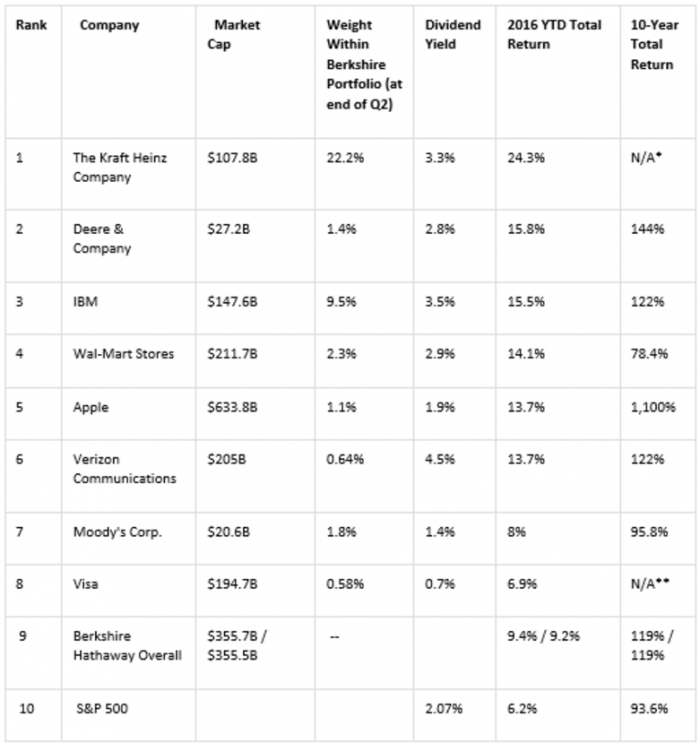 For the first six months of the Wal-Mart's fiscal 2017, the retailer's revenue edged surged 0.7% and 3.4% in constant currency from the year-ago period. Moreover, its operating income for this period falls 2.6% and 0.1% in constant currency and adapted earnings per share decreases nearly 3%. For the full year, analysts expect revenue to increase 1%, and adjusted EPS to decline 5.4%.

Most buy and hold investors should also pass on agricultural equipment manufacturing company titan Deere & Company. Its dividends listed in the chart conceal the fact that it's an extremely unstable cyclical stock. In fact, Deere's price is still less than it was at its all-time highs about eight years ago. Moreover, the company continues to combat year over year revenue.

Verizon, IBM, and Kraft Heinz with their 4.5%, 3.5%, and 3.3% returns yields are solid choices for profit making investors. Visa is an attractive choice for investors, who are most focused on stock-price recognition. Its recent addition of its Visa Europe unit should help bolster its competitive position against MasterCard. Moreover, its recent agreement with online payments giant PayPal provides additional growth potential.

The best buy for most investors from a long-term total return basis is Apple. Buffet bought an initial stake in Apple in the first quarter and bought more shares in the second quarter. He obviously saw value in this immense long-term winner, with its share price down from its all-time high set in early 2015.