16 August, AtoZForex  - According to Colin Cortbus of Vanuatu Dailypost (dailypost.vu) discovered that the Russian website, Vanuatulicense.com, tried to deceive investors by pretending to be VFSC official partner. The so called corporate service provider claimed to be an official partner of the VFSC and taking advantage of the rising demand for financial services licensing in the tax haven island by offering services to set up international bank accounts as well as being the "help" to obtain the local license for registering a Forex or binary options brokerages.

Given its safe haven status, Vanuatu is becoming a popular jurisdiction for Forex and binary options firms that are seeking to get an offshore license and benefit from no personal income tax policy of the island nation. Considering that the VFSC offers various tax benefits, requires a low initial capital, while the process of obtaining a license only takes up to 3 months, it is obvious that this tiny island nation is on demand nowadays.

AtoZForex.com has unveiled that even some of the EU based FX and Binary options brokers are in the process of acquiring Vanuatu Financial Services License.The rising demand for VFSC license also brings the opportunity hunters with itself. According to the Vanuatu DailyPost Vanuatulicense.com scam could have succeeded in its sophisticated Russian Vanuatu licensing scam. As the group framed themselves as being an official VFSC partner.

Commenting on the case, George Andrews, the head of VFSC revealed that:

“We never had any agreement or created any partnership with any agent in Russia for such activity. This is clearly a scam which obviously leads to a cybercrime activity aiming to defraud investors.”

Adding to the case, an officer of the Vanuatu Police Force mentioned that the regulatory authorities are informed about the activities of the website. The local police are currently investigating the case and its objective is to find the people liable to the scam. 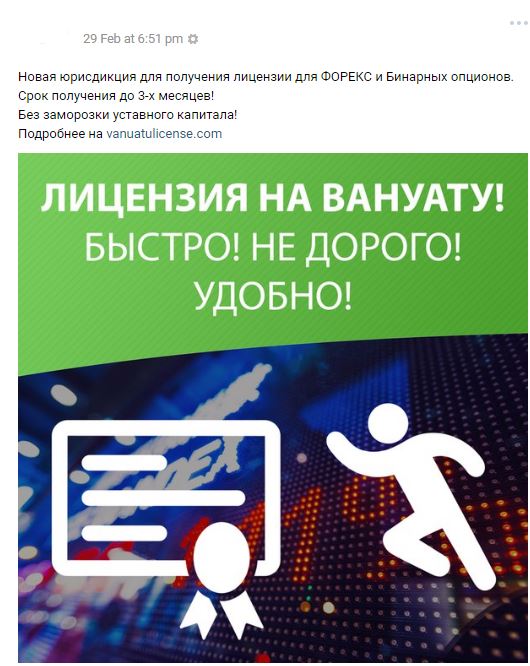 As per the phone number provided on the website, we tried to speak to the company however we were passed to a representative named "Mark Hoster" and then ‘Victoria Shane’. Victoria declined any ties to claimed partnership with VFSC regulator, neither mentioned the location of the firm. Despite being live, the company also rejected to have any such service. However, digging more into Vanuatulicense.com scam, we found out that the company heavily advertised on various social media channels in Russian including VK.com and others.

As soon as Vanuatulicense.com was contacted they have gone offline.

As Vanuatu DailyPost covered, the domain - Vanuatulicense.com  was registered through a US proxy registration service. This enabled the owners to conceal their names from the WHOIS database, which records the domain owner details. Evidently, most of the contact details were not provided on the website, except for a telephone number from the Moscow region and the logo of a firm called Finarium.

When the logo of Finarium was tracked down, it was clear that this company is not listed on Russia’s electronic Unified State Register of Legal Entities (E-GRUL). Instead, an unrelated firm appeared in the registry, under the name of Finarium-MT. This was an auditing firm that got deregistered in 2009.