19 July, AtoZForex – The world is chaos. From one calamity to another prompting the USDTRY long-term outlook after attempted Turkey Coup. The failed coup in Turkey last Friday left markets somewhat confused, while Turkish investors were left to worry the most about the potential effect of the disastrous situation. But, apparently, Central Bank of the Republic of Turkey has it all under control.

In a bid to calm investors, the central bank in Turkey said it will implement many different precautionary policies to protect the financial stability in a region. Amongst others, a few of the policies which will be put in place to manage the situation include:

The event of the attempted coup on Friday night left over 1000 people injured while at least 290 died in the unfolding of the event. With the coup now under control according to the president, Recep Tayyip Erdoğan. The government is now taking steps against the betrayers. However, the situation over the Turkish government response to the coup has raised some worries in the EU. The foreign ministers have criticized the massive arrests by officials in Turkey in the last two days. EU authorities concerned that the Erdogan’s response to military coup could further close the space for democratic opposition in Turkey. This also is a source of a conflict between Ankara and Brussels.

All of these has left markets spooked still, despite the effort from the central bank to calm things down. 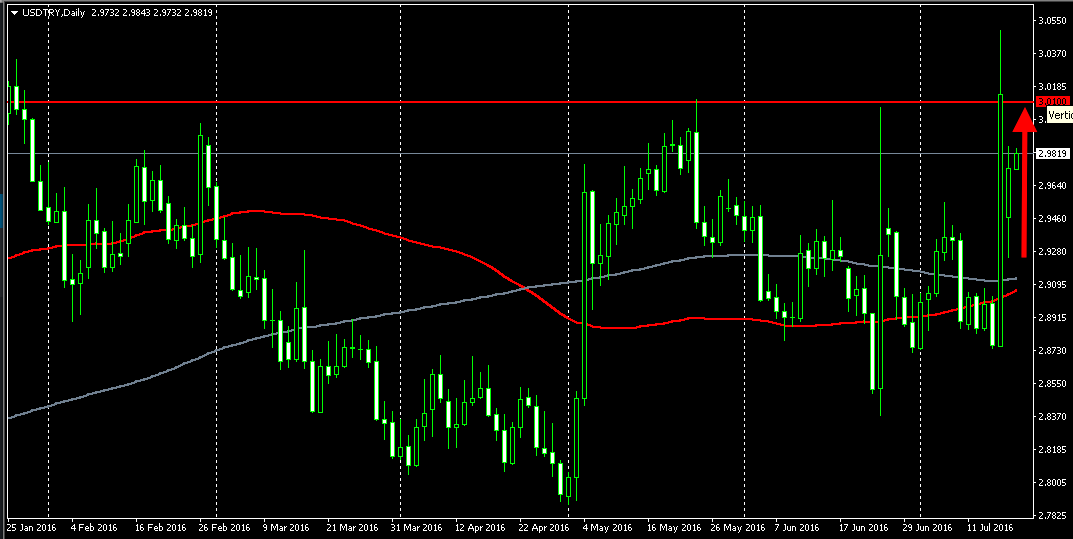 Fundamentally, the Turkish Lira is expected to remain weak in the face of the broad uncertainty. While investors will flock into safe heaven assets if the situation looks more threatening, therefore creating a platform for a dollar rise. Hence, a good scenario for the USDTRY to rally. Already, in the wake of the incident, the USDTRY reversed a bearish trend to rally sharply after news of the coup broke out. Technically, the pair is expected to extend its upside move, with the next key resistance around 3.0100. Having formed a bullish price action on the daily charts, we expect a further rally in the USDTRY pair today.