USDSEK trade opportunity on the horizon! Swedish Riksbank considers another rate cut, as the bank was ready to extend its quantitative easing further. Will the central bank deepen the negative rates across Sweden?

28 October, AtoZForex – The US dollar has reached its highest levels in more than seven and a half years against the Swedish crown on the dovish remarks from the central bank in Sweden, Sveriges Riksbank.

Moreover, the greenback has reached a three-month high against the Japanese yen on the expectation of the interest rate raise by the Federal Reserve in December. Riksbank has stated that the odds of another rate cut have increased, where the bank was ready to extend its quantitative easing (QE) program more.

As a fact, the central bank of Sweden has already cut the interest rates to negative 0.5 percent and now is currently on its way to purchase 40 percent of the stock of outstanding government bonds by the end of 2016.

Trading Doc, the Forex analyst at AtoZ Forex, has shared his views on the USDSEK:

"With the probability of a rate hike in Dec 2016 by the FED above 75%, the USDSEK is testing the highs of Feb 2009. If price clearly breaks the 9.3675 level and remains the bullish bias remains for the USDSEK with long-term targets at 10.8580 level. There are interim resistance levels 9.6525 and 9.9870 where price correction is possible before continued upside movement." 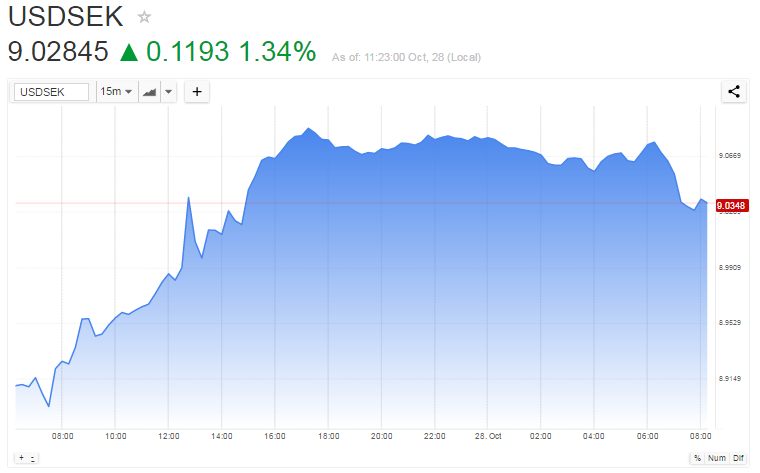 The US dollar was last trading 1.22 higher against the Swedish crown at 9.0164 crowns, after hitting the level of 9.0424 crowns, which is the highest since March 2009. The managing director and Global Head of G10 FX strategy at Citigroup in New York, Steven Englander, has commented:

"You sort of expect the central bank to say something like, 'policy is easy, just the way we like it.To take a step further and endorse further weakness ... conveys to the market that you're supremely dovish."

In addition, the dollar has reached a three-month high against the Japanese yen, touching a level of 105.00 yen. The managing director of FX strategy at BK Asset Management in New York, Boris Schlossberg, has stated:

"The market is getting more and more comfortable with the idea that the Fed will pull the trigger in December.”

The odds for the December Fed rate hike were last seen at 78 percent, according to the reports from the CME Group's FedWatch program. The Euro appeared higher 0.25 percent against the dollar at $1.0934. The dollar index, which weighs the greenback against a basket of six major currencies, was last mainly steady at 98.652.