USDMXN falls to a 4-week low, falling to 18.790MXN and maintaining a short term bearish trend. What can we expect next for USDMXN?

18 October, Orbex – Supporting the bearish case for USDMXN was last week's second US presidential debate, which once again saw Republican nominee, Donald Trump failing to make an impact. The dollar fell like a rock on Monday's open after the second presidential debate before prices started to consolidate within a range by Friday's close.

The Bank of Mexico's monetary policy meeting minutes were released on Thursday, October 13 from the policy meeting two weeks ago. The central bank had hiked interest rates by 50 basis points at its meeting on September 29, bringing the benchmark interest rate to 4.75%, which is the third rate hike this year. In its policy statement, the Mexican central bank noted that the rate hike wasn't a part of the tightening cycle which managed to mute the peso's rally to a certain extent. 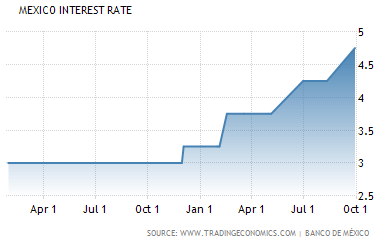 The monetary policy meeting minutes, however, proved to be otherwise. The report released last week showed that there was a unanimous agreement to hike interest rates to stave off inflationary pressures on account of external factors. More importantly, there was no mention about reversing interest rates if the risk outlook had diminished, indicating that the interest rate could remain at or above the current levels in the near term.

The minutes showed that members were of the view that the currency depreciation had a limited but increasing impact on inflation. In September, Mexico's consumer price index or inflation was registered at 2.97%, which is just below the 3% mandated target rate set by the central bank with sub indexes showing a clear inflationary pressure on account of a weaker exchange rate.

Members acknowledged that the weaker exchange rate and the potential for further depreciation posed the risks of inflation overshooting the target rate.

US presidential risks weigh on USDMXN outlook and monetary policy

The November US presidential elections have also put pressure on USDMXN with Trump being seen as the main catalyst, especially for his hard line approach to immigration and future policy course between the US and Mexico.

Highlighting this risk, the Mexican central bank governor, Agustin Carstens, in an interview to a local radio said, "Extraordinary events, including the victory of Donald Trump in the US presidential elections, could trigger a rate increase." He, however, maintained that he was comfortable with the current monetary policy decisions. On inflation, Carstens said, “if we let inflation get away, interest rates are going to be much higher, and credit conditions more precarious.”

Besides the immediate risks from the presidential elections, Mexico’s sovereign ratings are also under scrutiny. Standard and Poors’ global ratings and Moody’s have both put Mexico’s sovereign ratings outlook to negative citing a wider current account deficit and rising public debt. Both the ratings agencies agreed that economic outlook had been deteriorating in Mexico with rising concerns on sluggish exports and decline in business and consumer confidence. However, there were some positives especially on the growth side especially in the third quarter, after Q2 GDP growth contracted 0.20%.

The weekly chart for USDMXN shows price has been traversing a rising wedge pattern, which is still to be validated. Currently, we expect a near term decline towards the support level identified at 18.675. If this support holds, USDMXN could be looking at a near term retracement to the upside with the likelihood that the dollar could test the previous highs around 19.60. 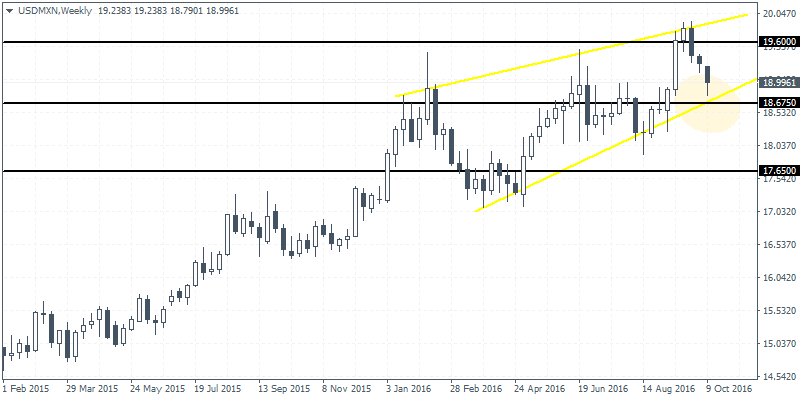 Such a move could form a near text-book rising wedge pattern which could then mark the start of a strong decline back towards 18.675 and eventually breaching this level to slide to the next main support seen at 17.650.

The timing of this move could be crucial, and the rally in USDMXN could be seen coming as we head closer to the US presidential elections which could bring the added volatility as well.

This article was written by John Benjamin, Analyst at Orbex – an AtoZ Approved Forex Broker.