The US dollar has pulled back from the 109.00 level against the Japanese yen currency, following bearish comments from President Trump towards Sino-US trade talks.

July 31, 2019 | SQUARED DIRECT – The Dollar was stable against the Yen yesterday until Trump attacked China over trade talks in a series of tweets, which also made equities to fall. On the other hand, the Bank of Japan had a monetary policy meeting earlier this morning spiced with some dovish comments, as it indicated that policymakers won’t hesitate to take additional easing measures “if there is a greater possibility that the momentum towards achieving the price stability target will be lost.”

The current market sentiment is mixed as traders are eagerly waiting for the most anticipated FOMC rate decision in a decade. A 25bps rate cut will likely be positive for the Dollar, boosting it towards 109 and possibly above. However, a deeper cut could shock the market and traders will likely drop the greenback towards the June lows.

The pair continues to consolidate between 108.45 and 108.75, as the bulls and the bears are fighting to take control. Recently, the buyers have been subdued below 109 since May, as every time they try to challenge that level, the bears will show up and push it lower. Today’s FOMC could be in the Dollar’s favor as the buyers will finally have the opportunity to break higher. In contrast, if the bears break below 108, we will likely see a revisit of June lows. 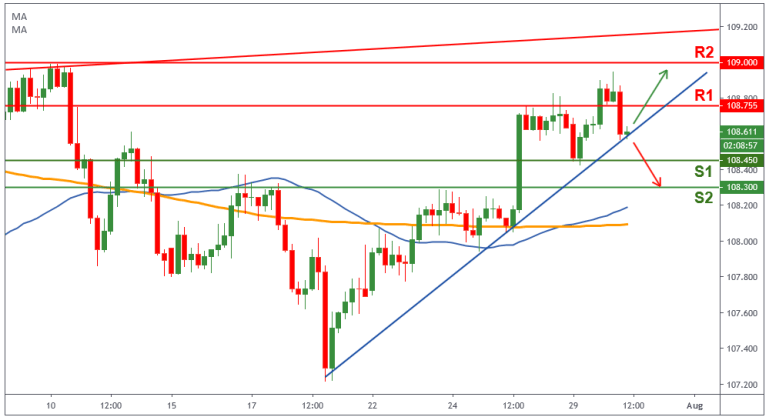 Tags Bank of Japan FOMC Forex analysis Japanese Yen US dollar USDJPY analysis
Forex Crypto
Top 5 Forex Brokers
Top 5 Crypto Exchanges
Your subscription could not be saved. Please try again.
Thank you for subscribing. You will be the first to receive all the latest news, updates, and exclusive advice from the AtoZ Markets experts.
Everyone is reading
Top 5 Forex MT5 Indicators for 2021 you should try
Top 5 Cryptos to Watch in Quarter 2 2021
Bitcoin Facing Resistance Around $60,000 Event Area - What Next?
close ×