The Labor Department has just released its October employment statement Friday. This analysis of HotForex, USD plunges Following October NFP Data provides a brief review on how the major pairs reacted after the US jobs data release.

3 November, HotForex – U.S. nonfarm payrolls increased 261k in October following the upwardly revised 18k gain in September (was -33k), while the 169k August gain was bumped up to 208. The unemployment rate slid to 4.1% from 4.2%. Earnings were flat following the prior 0.5% jump. 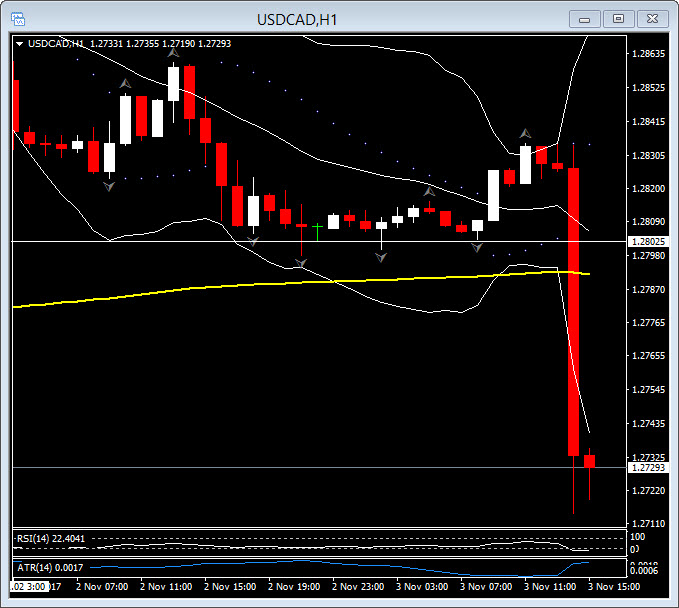 The dollar fell broadly following the jobs report, where NFP missed the mark by a significant margin, hourly earnings were soft, while the unemployment rate dipped to 4.1% from 4.2%. The trade report revealed a slightly wider than expected deficit, but likely had no impact on the FX market. EURUSD rallied to 1.1690 from 1.1660, as USDJPY tumbled to 113.64 from near 114.05. Yields fell, while equity futures remain fractionally higher.

Average weekly earnings growth improved to a 2.4% y/y pace in October, leaving the fastest rate since April of 2016. However, that is still below the 3.0% or better than the BoC desires and hence remains suggestive of ongoing slack in the labour market. This report is better than expected at first glance, with a solid gain in total jobs and further growth in part-time employment. USDCAD sank to 1.2713 before recovering to 1.2730.

This article about USD plunges following October NFP Data was written by Andria Pichidi, Market Analyst at HotForex. The provided article is a general marketing communication for information purposes only. It does not constitute an independent investment research. Nothing in this communication contains an investment advice or an investment recommendation. It also does not contain a solicitation for the purpose of buying or selling of any financial instrument.