AtoZForex.com, Cambridge – It was a very good week for the USD last week further increasing the likelihood of an interest rate increase in September. (All eyes on this week’s FOMC meeting.) Both core and retail sales coming in above expectations as well as strong monthly PPI figures and consumer sentiment on Friday. There is also a chance that Q1 GDP will be revised slightly higher, couple that with the recent NFP data, it definitely looks like the US economy is beginning to gain momentum.

Much like the UK, everybody waits for the FOMC statement and associated interest rate decision. Very few people, despite positive data last week, expect an interest rate change but this could be the most important meeting pre-September. The language used in the minutes will be closely watched for indicators confirming a September increase in rates.

In addition to this we are also awaiting CPI releases on Thursday which are also expected to come in positive, if they come in ahead of expectations then this will further reaffirm the September increase. Finally, we have the Philly Fed manufacturing index release.

Bond yields corrected slightly last week probably due to the impending FOMC statement, but over the month are still significantly bullish. Likewise, the S&P 500 showed a level of indecision in preparation for the statement, which if hawkish, could start to indicate a sell-off in equities. 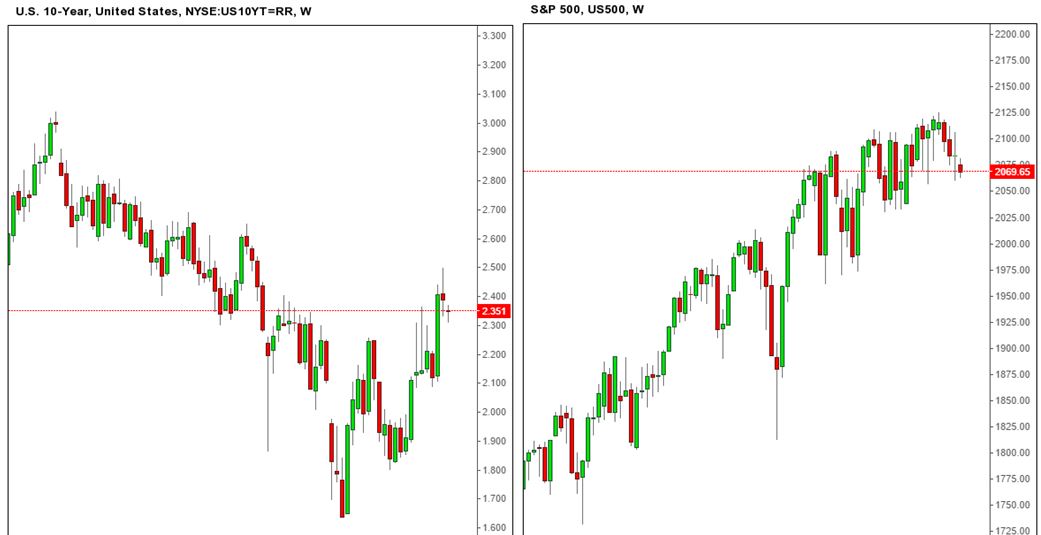 The USD remains the strongest currency in the longer term, with a bullish USD market sentiment. The recent Core CPI and NFP readings have confirmed USD strength amid speculation of a rate hike by September. Although the bullish dollar does remain near long-term highs against the most pairs and therefore we could be expecting pullbacks. Considering what appears to be economic contraction I would not be looking for shorts against the USD, but to buy on those pullbacks. This week’s FOMC statement will be critical for the USD market sentiment.

EURUSD: Stuck in a very cramped living space.  Currently staying in between the daily 55 ema and the 1.13750 area.  Look for breaks above 1.13750 for longs although fundamentally I am not looking for longs, or the same area for rejections to go short.  If we break below the 55 ema, I am keener on shorting.  There is also a nice trendline to break to kick start the downtrend again.
GBPUSD: Even though we had a very bullish week last week, price failed to breakout of very important s/r areas.  I am not keen on longing the GBP due to fundamentals but I love the idea of shorts below 1.5270 as this also takes out an important trendline.  It is also possible to place short orders at or above 1.5630 -1.5670 zone.

AUDUSD: Still looking quite bearish in my opinion both technically and fundamentally, but the options seem very clear to me.  Trade long on a breakout/pullback/rejection above .7800 with .8000 as the target.  Trade short under .7700 with close attention paid to .7600 as it has been a good support over the last few months.

USDJPY: Price has certainly pulled back from recent highs.  I very much like the idea of longing from 122.00 as this would be the first real pull-back to this area since the breakout above.  If, we break underneath it though, it is a very significant break and I would be happy to short under the area.  Look for reasons to confirm either trade.  Also, the aggressive among you might want to look for reasons to short from 124.00 if we ping off of it to start the week on our way down to 122.00