FidelisCM has provided its analysis and outlook for the new trading week. NFP eyed as G20 digested, while the USD ended second in strength the previous week against its major peers. The European currency pairs have been underperforming on “Brexit” fears.

There has been comments that Bank of England and European Central Bank are ready to add to stimulus if needed. Concerning the Euro currency, a series of economic indicators were released below expectations including lower Inflation data and that pushed it on the downside. Nevertheless, the worst performer was GBP, selling trend prevailed with the GBPUSD breaching psychological support at 1.40 and falling to fresh 7-year lows.

Worries for a Brexit have peaked the previous week as London Mayor, Boris Johnson, revealed his favor for leaving EU. At the close of the previous week, US GDP and US consumption data were stronger than expected and that drove the greenback to take back ground against the Aussie and the Gold. 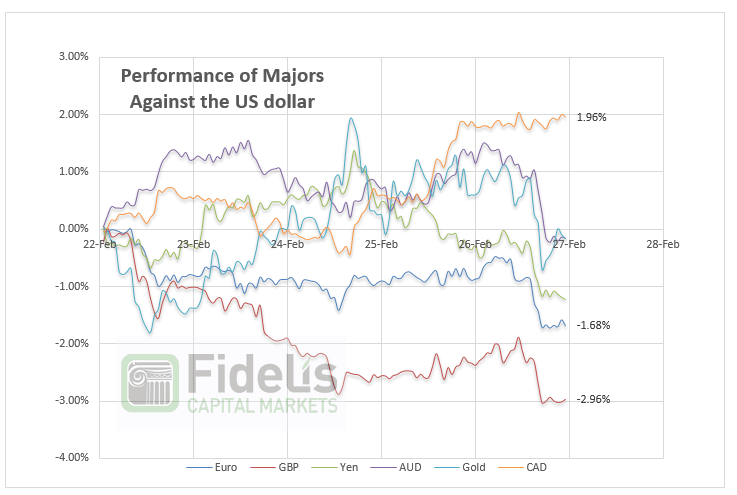 On the relative path chart we can see that the best performer of the previous week has been the Canadian dollar amid rebound in Oil prices and positive comments by the head of Bank of Canada. The Loonie printed gains of 1.96% against the US dollar and managed to hold that gains when other currency peers where losing. The BoC Gov. Schembri said that “our risks and vulnerabilities are much lower than other countries” coupled by Oil prices rising to monthly top at 36.40. The Yen was mixed due to USDJPY finding strong support at 15-month low at 110.99.

The latest CFTC data show that the net USD long position narrowed for another week, falling to aggregate net long of $7.6 billion, down by $3.26 billion. The US dollar bullish bias continues to moderate for data up to February 26th mainly due to the Gold net bull position growing. The Euro aggregate net short position was steady and the Japanese Yen net position remains bullish with the weekly change being slightly positive. Lastly, the Gold shows bullish market sentiment as far as it concerns reported speculative positioning. Taking into account lack of G20 countries to agree on new measures, risk-off sentiment could drive markets this week, confirming bullish sentiment for Gold.

NFP eyed as G20 digested, hence this week is going to be event driven as we look ahead for Non-Farm Payrolls on Friday. Nevertheless, disappointment from the meeting of the Shanghai G20 most advanced and developing economies amid lack of new measures to spur global growth, risk averse may be another driver this week. Monday is news quiets, followed by Tuesday releases of China Manufacturing, RBA Monetary Statement, Canadian GDP and US ISM Manufacturing PMI report.

On Wednesday look for Australian GDP and US ADP Employment report and on Thursday watch US Jobless Claims and US ISM Non-Manufacturing PMI. Lastly, on Friday all eyes will be on US Non-Farm Payrolls, expected to show an addition of 195K in February up from January 151K increase in people employed.