EURUSD  dropped below 1.125 on Wednesday after the US PMI data beat expectation. Will Draghi drag the EUR further downside on Thursday? The following share technical insights based on Elliott wave theory.

June 05, 2019 | AtoZ Markets – The Euro-dollar currency pair hit 1.13 on Monday after an impressive bullish run in the week. The Dollar started the cross-board weakness last week until today’s US PMI data release caused a bit of recovery. The data at 56.9 came better than expected. After the data release, EURUSD tanked from 1.1305 and currently trades at 1.1235. There were indications that the USD would recover and the EUR weakness will come to the light once more. The market will now look forward to the ECB’s monetary meeting and press conference. Dovish comments and forecast will send this currency pair below 1.11.

When EURUSD price hit 1.13 today, it was basically at its highest since mid-April. The bullish run from 1.111 still looks rather corrective and further raised suspicion on the strength of the bullish push from 1.111. 1.1265 was a significant resistance level after the double top pattern between May 1 and 13 a big surge above it to 1.1375 and above would have confirmed the bullish breakout that could lead to 1.18. However, the sudden dip that happened afterwards did show that the bulls are becoming cautious.

From the perspective of Elliott wave theory, the long term bearish trend from January 2018 is in the final stages. However, the 5th wave pattern is looking more complex than expected as the Euro-zone troubles weigh in. In the past updates, we have looked at the possibility of an ending diagonal 5th. In the last update, we had two scenarios. The first suggested the diagonal 5th ended with the double bottom pattern at 1.111-1.11. However, the 5th leg of the diagonal was supported by the 3rd wave which is very unusual. However, we held on to that provided a surge to 1.14 happens to invalidate an alternative scenario which is now more likely to happen. The chart below shows the possibility of the 5th leg digging below 1.11. 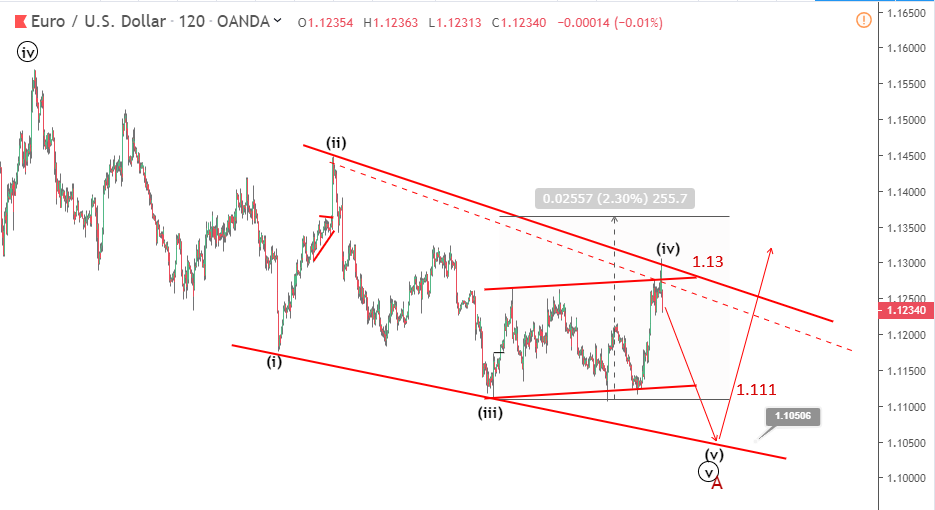 If the current dip continues below 1.1215, wave (v) could be on its way. Further dips to 1.111 and below is very much likely. The ending diagonal pattern could end at 1.105 and its neighborhood before a genuine bullish push toward 1.18 could happen. Of course, a lot depends on Thursday’s ECB meeting and Friday’s US employment data release. On the other hand, a big surge to 1.14 would invalidate this forecast and give the bulls the much-needed advantage.