Following last Friday's NFP solid print, USD index gains support on NFP rise. Looking ahead, what can we expect for USD Index in the near term?

08 August, Orbex – The US nonfarm payrolls released by the Bureau of Labor Statistics on Friday, August 5, 2016, showed another solid print, marking two months of positive data following the May's dismal report. The data showed that the US economy added 255k jobs, beating the median forecasts of 180k. The unemployment rate was seen to be holding steady at 4.90% for the second consecutive month, while the average hourly earnings managed to rise 0.30% in July, following the 0.10% increase in June.

The July jobs report beat the even most bullish estimate by Goldman Sachs who forecast a 190k print for July. The positive revisions to June saw the monthly jobs increase from 287k to 292k. The participation rate also held steady above the 62.6% average for 2015. 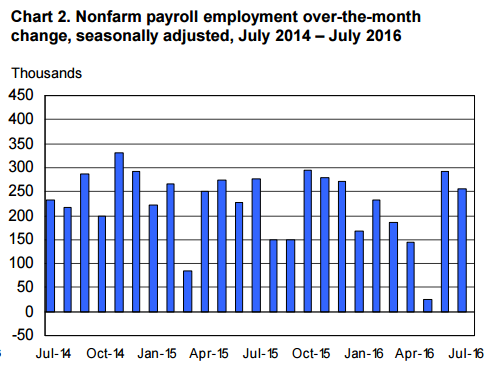 Friday's report indicating US nonfarm payrolls rise was a boon for the US dollar which was hit by weak economic data over the previous week. The markets did not quite buy the Fed's intentions for keeping the September FOMC as a live meeting for a rate hike. But after the Friday's report, the Fed funds futures ticked modestly higher, with the probability of a rate hike in September rising to 15% from 9% the day before. However, as with any economic report, Friday's report was all about how the general market sentiment viewed the report. The weak GDP growth, which is below 2%, is also still fresh in trader’s minds.

But for the near term, the data showing US nonfarm payrolls rise managed to give the much-needed support for the US dollar index which fell back to the 95.00 handle earlier this week.

Although it is still early to tell, price shows that support has been established at the 95.75 – 95.50 price zone which previously acted as resistance in mid-May this year. The US dollar index could, therefore, extend the gains, provided price action breaks above the 96.60 – 97.15 resistance level. The question remains whether the dollar index will retest the 96.60 – 97.15 break out level and turn bearish, falling below the support at 95.75 – 95.50 or whether the momentum will keep the dollar index strong enough to break out above 96.60 - 97.15 resistance.

Looking ahead: China data and US retail sales

As USD Index gains support on NFP rise, the week ahead promises to be quiet for the US dollar with traders focusing on the economic data on Friday which will see the retail sales and PPI data followed by the UoM consumer sentiment. Retail sales are expected to continue rising for a fourth consecutive month, although the pace of gains is expected to be slower than the previous months. July auto sales released last Tuesday showed a below expectations print, with annual auto sales rising to a seasonally adjusted 17.88 million during the month. Analysts were expecting to see July auto sales in the region of 17.5 - 18.1 million.

This article was written by John Benjamin, Analyst at Orbex – An AtoZ Approved Forex Broker.