15 July AtoZForex — In today’s report of the U.S Labor Department, it has been revealed that the US June CPI rose 0.2%. The data came in as forecasted by the market. As for the US retail sales, the actual data have beat the expectations of the market. The Bank of America's forecast of 0.1% M/M in June has been exceeded by 0.6%.

- The US CPI is in alignment with the analysts’ expectations of 0.2%

The US June CPI increased for four straight months in a row, marking a gradual rise of inflation pressure. The Fed has set the inflation target at 2 percent and with the current concerns about a persisting low inflation, it is logical that the US central bank decided to keep the interest rates unchanged over the last month. 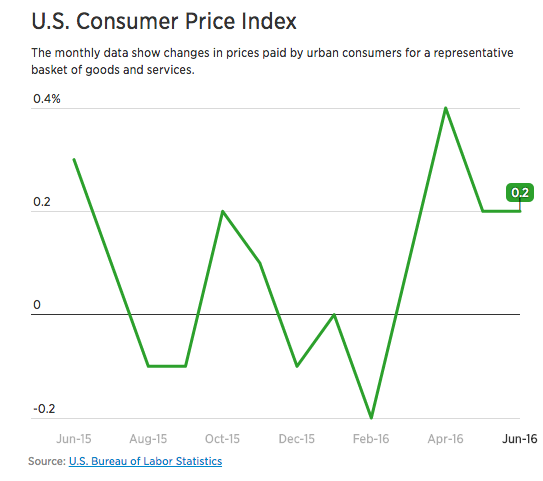 US retail sales in June, posted a solid increase. This is another sign that the US consumer spending has picked up in spring, after a slow start earlier in 2016.

- The data exceeded the forecast of 0.1%

- In the preceding month US retail sales climbed 0.2 percent

The better than expected surge was led by online stores and home-and-garden centers. The sell of garden supplies and building materials soared 3.9%, which is the largest increase since 2010. In fact, these purchases present about 42% of the total increase in June's retail sales.