January 07, 2019 | AtoZ Markets - The U.S federal authorities have recently raided a centre for science and technology based in the state of Michigan, as part of the cryptocurrency related investigations that were taking place in the time, as per reports from local news outlets.

In the details of the news, Chris Boden, the founder of The Geek Group, said in a public statement on YouTube last Saturday, that his office, which was described to be as “tech-oriented, non-profit organization” had been raided by members of the U.S. Federal Bureau of Investigation (FBI) and the Department of Homeland Security (DHS) on Dec. 21.

The video which was deleted later, said also that the authorities confiscated properties like computers and other equipment from the office.

According to Wood-TV, Boden had declared he was “commercially trading in crypto-currency without the proper authorization.”

The founder believes he may face a severe punishment!

The ramifications that the incident might result in, includes a federal imprisonment and legal expenses that reach up to $100,000, as Boden reportedly expected.

On his Facebook page, Boden posted on Jan. 6, that he would be writing a live public statement in an open Google Doc, saying: “On the advice of legal council I will not comment further on the Government’s ongoing investigation.” 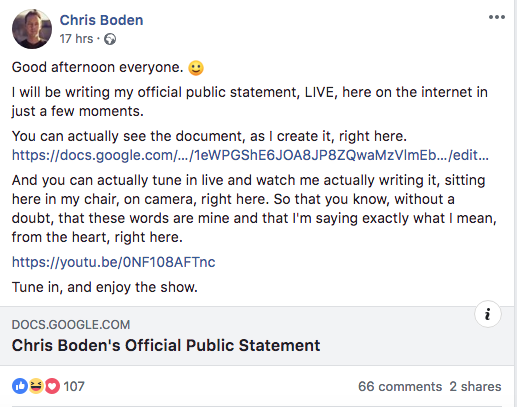 In a connected news, as the media reported the last month, the CEO of Romania's largest crypto exchange Coinflux was also reportedly arrested on a warrant from the U.S. against the background of a fraud, organized crime and money laundering case.

Similarly, last August, the South Korean authorities raided the office of a local firm, which it was said to have been involved in a crypto scam, as the reports informed.

It is worth mentioning in this context that the U.S Securities and Exchanges Commission (SEC), which is in charge of keeping an eye on the financial activities taking place over the States, maintains a firm grip over the industry, with further security measures have been recently taken with regard to cryptocurrency trading and ICOs.