Major cryptocurrency exchanges in the U.S., led by Coinbase, have launched an initiative dubbed ‘Crypto Rating Council’ to jointly define which digital assets are likely to be classified as a security.

September 30, 2019, | AtoZ Markets – A set of cryptocurrency firms in the United States, such as Coinbase and Kraken have teamed up to launch a rating system to help classify which digital assets are securities.

In a move to provide more clarity for what tokens can be traded so as to avoid running afoul of securities rules, major U.S.-based exchanges formed the points-based rating system Crypto Ratings Council (CRC), as unveiled by Coinbase in a blog post, Monday.

As per the report, other exchanges that have joined of the CRC include Circle Internet Financial, Bittrex, Genesis Global Trading, Grayscale Investments, Anchor Labs and DRW Holdings’ Cumberland unit. The report also notes that the group is still recruiting participants.

CRC aims to rate digital assets from 1 to 5

As part of the effort, the council will rate digital tokens on a scale of one to five, where the highest value means that a certain token is considered as a security that cannot be issued, sold or traded by unregulated firms.

As of now, the flagship cryptocurrency Bitcoin is rated at 1, as regulators publicly said that Bitcoin is not a security. Notably, Ripple (XRP), Maker (MKR) and Polymath (POLY) found themselves on the higher end of the scale of 4 or 4.5.

The chief legal officer of Coinbase, Brian Brooks, who reportedly is the originator of the rating system, stressed that the question whether a certain token is a security or not is “one of the biggest uncertainties around crypto and the reason why more asset managers are not comfortable with it.”

At the moment, none of the regulators, the U.S. Securities and Exchange Commission (SEC), the Commodity Futures Trading Commission (CFTC) or any other regulator have endorsed the methodology or its resulted ratings.

Nevertheless, Kraken’s general counsel, Mary Beth Buchanan has expressed optimism that the SEC will view the initiative as a positive step, claiming that the CRC aims to show the regulator the exchanges’ efforts to come to a decision on the matter.

Changpeng “CZ” Zhao, CEO of the Binance exchange was skeptical of the new rating system. He tweeted: 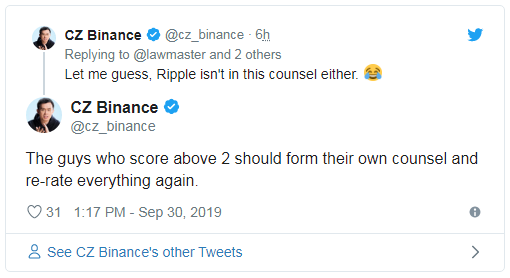 The council’s formation comes on the heels of payment network Ripple’s motion to dismiss a lawsuit of its XRP cryptocurrency. Ripple said in its filing that XRP is not a security, though this was not a core argument in its motion to dismiss.

Rootkit Finance Creates UpTokens: A New Frontier in Liquidity Mining
Forex Crypto
Top 5 Forex Brokers
Top 5 Crypto Exchanges
Your subscription could not be saved. Please try again.
Thank you for subscribing. You will be the first to receive all the latest news, updates, and exclusive advice from the AtoZ Markets experts.
Everyone is reading
Is Forex Trading Illegal in India? Can Indians Trade Forex Legally?
XRP Skyrockets After Ripple’s ODL Announcement
Ripple Found Support Around $0.62 Price Area - Will Recover Upside?
close ×