Get VIP Trading Signals Market Watch
Trade Now Your capital is at risk.
The vast majority of investors — 93% — believe the upcoming U.S. presidential election will impact the stock market in the coming months. Will S&P 500 surge or decline after the winner is announced? What can you expect?

US election results and stock markets

As election day approaches, intrigue is growing in America. Economists and analysts around the world are pondering who will be the next US president. Biden is representing the Democratic side. He advocates higher taxes for large companies and wealthy Americans. On the other hand, there is Donald Trump, who intends to reduce the level of taxation for private businesses.

The closer the date of the announcement of the result, the more the market tension grows. The candidates stand for completely different ways of the country's development, and the victory of one of them will directly impact the volatility of the markets, According to AtoZ Markets analyst, Yury Safronau.

Some analysts are confident that the American market will continue to develop regardless of the candidate chosen. The international exchange will experience a high level of volatility, which is justified by a number of other factors. First of all, the continuation of the economic incentive program will affect the change in quotations. In addition, the high probability of mass production of the coronavirus vaccine creates favorable conditions for the growth of private businesses.

Not all participants in the global marketplace believe that Biden will dare to keep his election promise and will raise taxes for large companies. This economic incentive measure can have negative consequences for the candidate's reputation.

Some people believe that if Biden wins, the market will be in a state of shock. In the investor environment, there will be concerns about higher taxation and lower profits from private businesses. At the same time, further stimulation of economies and a gradual recovery from the crisis after overcoming the coronavirus will help maintain positive dynamics in the stock market. Large economic stimulus will have a positive effect on the stock market. Thus, shareholders and entrepreneurs in any case will be in the black.

Trump vs. Biden - How their programs differ 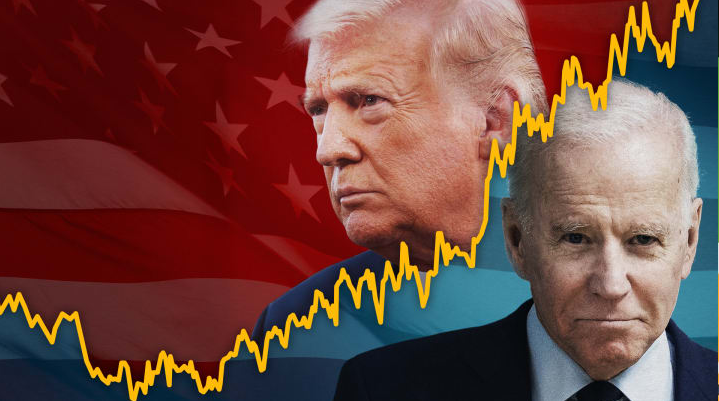 To understand the prospects for the development of the American economy, it will be useful to distinguish between the candidate programs:

From the foregoing, the election programs of the candidates are aimed at the development of completely different industries. Predicting the results of the elections in the United States, one can make a decision in favor of investment in a particular area.

How will the US elections affect the S&P 500?

Some economists believe that the results of the election campaign could collapse the popular S&P 500 index and create an unfavorable situation in the global marketplace. According to analytical forecasts, the index may decline by 7-10% within a month after the announcement of the winner. This will happen if politicians do not reach an agreement on the amount of financial support for the economic system.

Another negative factor for the S&P 500 index may be the second wave of the coronavirus. With a fall in stock performance, shares of large companies will also decline in price, according to Yuri. For the world economy, this will be a fairly significant blow, because international players are largely guided by the state of the American stock market.

Aside from the election results, Wall Street traders are very concerned about the winner's next move. According to Yuri, the state of the US stock market will directly depend not only on pre-election promises but also on the direct decisions of the new president.

Here's How Investors Should Respond to Another US Inflation Surge
Broker of the month!