St. Louis President and Chief Executive of the Federal Reserve Bank James Bullard addressed the Fed US Macroeconomic Outlook 2017 during an International Distinguished Lecture at the Australian Center for Financial Studies. Will US dollar stay strong amid the escalation in geopolitical tensions?

10 April, AtoZForex – St. Louis President of Federal Reserve James Bullard discussed the Fed US Macroeconomic Outlook 2017 in Melbourne on Monday. Bullard addressed the outlook during his presentation at an event hosted by the Australian Center for Financial Studies.

Furthermore, Bullard shared his views on the state of the US economy during his presentation. He also highlighted how it affects his outlook for the US federal funds rate target. Will US dollar stay strong in 2017 as per Bullard’s remarks?

James Bullard is a voting member of Federal Reserve’s Federal Open Market Committee (FOMC). The committee meets eight times in a year to set the direction of US economic and monetary policy. On Monday, Bullard spoke on the Fed US Macroeconomic Outlook 2017 during an International Distinguished Lecture at the Monash Business School in Melbourne. According to Jim Bullard, United States is a closed market in comparison with Australia and other countries. Moreover, he notes that the financial leaders do not track global events to the extent that more open economies do.

The Fed president also focused on the US current of low real GDP growth and low real interest rates. However, this situation is unlikely to change significantly this year as per Mr. Bullard. He said that the US policy rate can remain relatively low and still keep employment and inflation at target. In regards to the impact of possible US fiscal and regulatory policy changes, Bullard states that the Fed can take a wait and watch posture. He further commented:

“Real GDP has been growing about 2%, inflation is near the Fed’s 2% target, and the unemployment rate has been slowing. The first-quarter 2017 figures show GDP growth was below 2% and hard data suggested that things don’t look good.”

The members of the FOMC are responsible for setting the benchmark interest rate. Even their speeches are on list for indications on the future possible direction of monetary policy. Therefore, Bullard’s comments can determine a short-term positive or negative trend. Read below the comprehensive Fed US Macroeconomic Outlook 2017.

In addition to the policy rate, Jim Bullard also discussed the Fed’s $4.5 trillion balance sheet. He told a gathering of Australian Center for Financial Studies that he leans towards letting the Fed’s massive bond-buying program run off this year than rush to raise interest rates. He also said that now it may be a good time for the FOMC to consider allowing the bond-buying program to normalize by ending reinvestment. 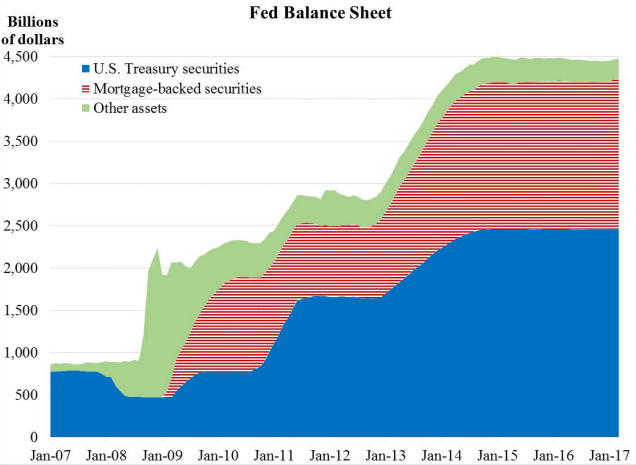 According to Bullard, ending balance sheet reinvestment might allow for a more natural adjustment of rates across the yield curve as normalization proceeds. He also argued that the recent US missile strike on Syria would have little impact on the US economy or the Fed US macroeconomic outlook 2017.

Will US dollar stay strong?

The USD trended upward in the wake of US air strike on Syria last Friday, but analysts were at odds on whether the greenback would keep flexing its muscles. Additionally, over the weekend, the US moved an aircraft carrier group closer to North Korea. That sent additional flows into the USD that is often considered a safe haven. The USD surged against a slew of currencies that include GBP, EUR, AUD, and JPY. A currency strategist at Citi, Todd Elmer, expects the strength of the USD and other safe-haven currencies (JPY) can persist despite the rise in geopolitical tensions. Elmer reiterated:

“It’s obvious that the immediate response to the US strikes in Syria has started to wane somewhat, but I do think there will be a bit of an aftertaste in terms of the market paying a bit more attention to geopolitics.

This is going to raise questions in investors’ minds as to whether this will provoke more tensions with Syria’s allies, Russian and Iran, and whether or not they should extrapolate this use of military action to other conflicts such as with North Korea.”

We reported before the weekend that the Fed plans to unwind its massive $4.5 trillion balance sheet that could amount to higher US rates sooner than expected. The expectation factors that have been at least partially responsible for the recent market rallies are that the Trump administration would boost infrastructure spending and reform tax policies.

Will US dollar stay strong? Think we missed something? Let us know in the comments section below.