May 23, 2019 | AtoZ Markets - Recently, different media resources announced that Bitcoin SV proponent, Craig Wright has been granted copyright registrations for the original Bitcoin Whitepaper with the US Copyright Office. Today the agency responded to the community via its press release outlining that it does not recognize Craig Wright as Satoshi

Craig Wright is still not recognized as Satoshi?

Both documents can be obtained on the official US Copyright Office website.

US copyright office responses to the media

The U.S. Copyright Office press release called “Questions about Certain Bitcoin Registrations,” detailed that agency “ does not investigate the truth of any statement made.” The press release states :

The agency outlined that when it comes to works created by a pseudonym like Satoshi Nakamoto in this case, the Copyright Office “does not investigate whether there is a provable connection between the claimant and the pseudonymous author.” The authority also details that correspondence between Wright and the agency is part of the public register record.

Following the US Copyright announcement, the well known libertarian writer and patent attorney, Stephan Kinsella, in his recent Tweets stated that Craig Wright’s copyright proves nothing. Kinsella outlined that false assertions regarding Wright claims happen because “most people don’t understand how copyright works."

He stated, that when people hear that the Copyright Office “registers” or “approves the registration” of works this somehow "means that the government has issued copyright to the applicant and verified their authorship." The patent attorney and intellectual property expert further concluded his thought by saying :

“None of this is true. Copyright registration is a simple procedure that does not prove copyright or authorship and does not prove anything at all, especially when done more than 5 years after the original work was published.”

The announcement caused different reactions and expectedly affected Bitcoin SV prices on the crypto market. Following reports that Wright registered Bitcoin copyright claims with the United States government, Bitcoin SV responded with a big spike from $65 to over $190. However, hours after, it lost nearly 50% to stay around $100 and has remained steady ever since.

Certain community members including Jerry Brito, the executive director at Coin Center and Peter McCormack, the host of the What Bitcoin Did podcast responded to the copyright announcement with humor. 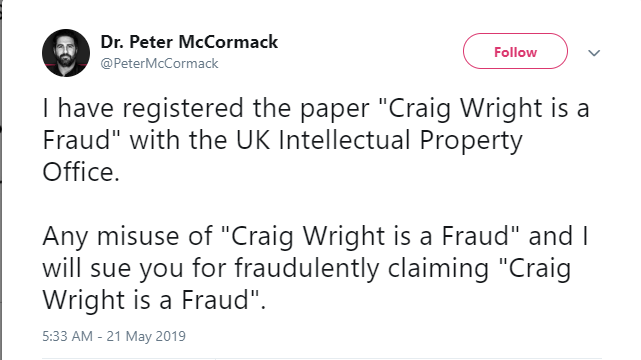 Jerry Brito in his Twitter detailed that the copyrights were, actually, meaningless. Coin Center founder explained that the U.S. Copyright Office does not investigate the validity of claims like these and they simply just register it. 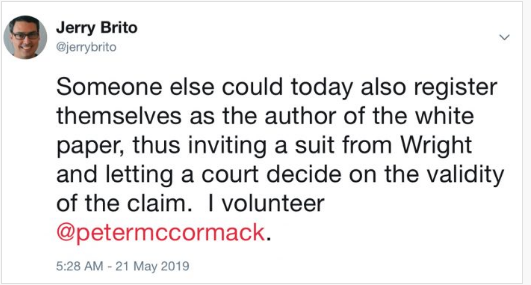 It is worth to mention that the Bitcoin code was released under the open source MIT license. It means that the software is free to distribute to any individual or organization and everyone has no limitations to what they can do with it.

According to the aforementioned open-source license, anyone can use, copy, modify, merge, publish, distribute, sublicense, and fork the Bitcoin software. In addition, there is a copyright notice from Satoshi established under the MIT licensing back in 2009, which gives developers the freedom to use the code in any manner.

Craig Wright, not the first to claim Bitcoin copyright

Over the last few years, there have been many individuals who have registered and have been granted copyrights to the Bitcoin software and it’s associated paper. Just by visiting the U.S. Copyright Office’s website it is easy to obtain more than 40 documents related to the “bitcoin” term.

For example, Ronald Keala Kua Maria, a resident from Hawaii who also believes he is Satoshi Nakamoto copyrighted the Bitcoin white paper in August 2016 with registration no. TXu 002037698.

He also copyrighted a decent number of other trademarks and words like “Bitcoin Cash.” Kua Maria also allegedly owns quite a few Bitcoin-related domains. It is worth to mention, that one of Kua Maria’s domains http://www.bitcoincopyrights.com now redirects to a BSV website. We can only guess whether Hawaii resident and Bitcoin SV supporter Craig Wright are somehow connected.