After a lot of speculation, a big date in Britain’s path to Brexit has been set: Prime Minister Theresa May of UK sets Article 50 date on March 29. Here is my Brexit GBPUSD analysis after the article 50 date is set.

21 March, AtoZForex – UK prime minister Theresa May plans to trigger Article 50 on 29 March. British citizens are waiting for this moment, which effectively begins the formal process of their country leaving the European Union. Many of us don’t know what the article 50 is all about and what it actually says. Here are the few things to note about the article 50.

Article 50 of the Treaty on the European Union is a part of European Union law that sets out the process by which member states may move back from the European Union. UK prime minister Theresa May UK sets Article 50 date for March 29. Commission President Jean-Claude Juncker also said the UK will have to implement the deal offered them or leave with nothing. Moreover, the letter Ms. May will send to the EU to officially start the Brexit process was likely to set out the broad negotiating objectives.

What Does Article 50 say?

1. Any Member State may decide to withdraw from the Union in accordance with its own constitutional requirements.

2. A Member State which decides to withdraw shall notify the European Council of its intention. In the light of the guidelines provided by the European Council, the Union shall negotiate and conclude an agreement with that State, setting out the arrangements for its withdrawal, taking account of the framework for its future relationship with the Union. That agreement shall be negotiated in accordance with Article 218(3) of the Treaty on the Functioning of the European Union. It shall be concluded on behalf of the Union by the Council, acting by a qualified majority, after obtaining the consent of the European Parliament.

3. The Treaties shall cease to apply to the State in question from the date of entry into force of the withdrawal agreement or, fail that, two years after the notification referred to in paragraph 2, unless the European Council, in agreement with the Member State concerned, unanimously decides to extend this period.

A qualified majority shall be defined in accordance with Article 238(3)(b) of the Treaty on the Functioning of the European Union.

5. If a State which has withdrawn from the Union asks to rejoin, its request shall be subject to the procedure referred to in Article 49.

Technical analysis of the GBPUSD pair

In the beginning of this week’s trading session, the GBPUSD pair gains to 1.2435. But after the article 50 news, the pair retreated to 1.2333 before sinking around 1.2350 at the time of writing. Tougher deals with the EU means more pressure on the GBP hence fewer gains. The GBPUSD pair still needs to move above 1.2400 levels to confirm the bullish side. Then it would form a strong support towards 1.2450 levels and 1.2520 levels. 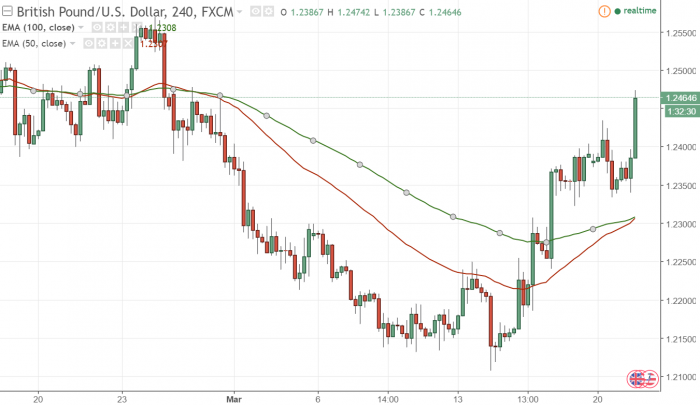