UK Q4 GDP Prelim data came at 0.6%, beating the market consensus of 0.5%. How did the report from the UK Office for National Statistics influence the GBPUSD?

26 January, AtoZForex – The UK Office for National Statistics has just released the figures for the GDP First Estimate. The UK Prelim GDP q/q for the Q4 reading emerged at 0.6%.

The data is very important for Forex traders as it is the largest measure of economic activity and the primary estimate of the economy’s health. The official data came better-than-expected, thus signaling a bullish trend for the cable. 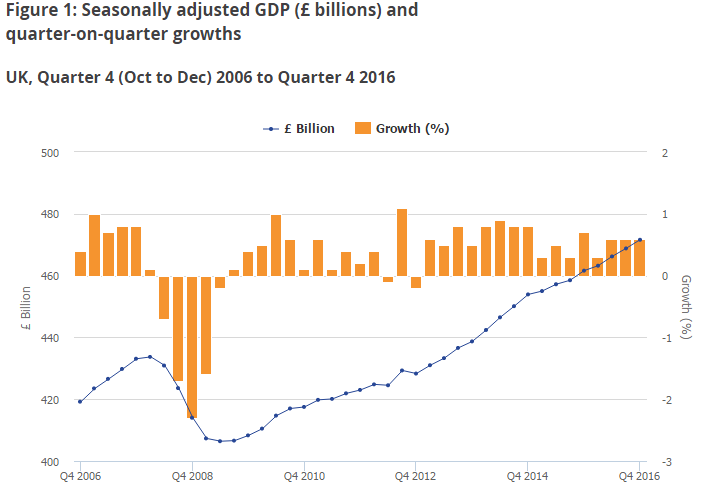 The official report from the UK Office for National Statistics highlighted the following:

“The preliminary reading of UK GDP for the final 3 months of 2016 has shown a larger than expected rise. An increase of 0.6% Q/Q is marginally higher than consensus forecasts and the prior reading was also revised upwards by 10 basis points. The release provides yet more evidence that the UK economy is running along nicely. Barring a blip following the EU referendum, there is little to suggest any weakness.

However the dark cloud of uncertainty that was created last June continues to hover threateningly overhead. Despite the Supreme Court’s ruling that parliamentary approval is required for triggering Article 50, the process of beginning formal discussions on the terms of life outside the EU is seemingly drawing closer. Hence, this poses a major threat to the UK economy in the coming years.”

According to the opinion of the Senior market analyst at AtoZ Forex, Edmundas Povilavicius, from technical GBPUSD analysis perspective, the pair continues its bullish rally guided by 50 hour SMA.

Prior to the release, markets were expecting a possible surprise to the upside, according to market experts. There was a big chance that the reading would emerge at 0.6%. After the expectations that consumer spending would back the growth. However, market consensus stood at bearish 0.5% ahead of the release. As the traders were expecting a slight deceleration in the UK GDP growth.

If case the data would appear in line with market expectations or better-than-anticipated, market experts saw the upward shift in GBPUSD to six –week highs. Moreover, they believed that in the optimistic scenario, the cable would test 1.27 resistance level.

In the opposite case, if the reading came weaker-than-expected, cable might have slid towards 1.2544 support. Before the data was released, analysts at Danske bank have stated:

“Q4 economic indicators such as the PMIs were solid in Q4 and the NIESR GDP estimate suggests GDP grew by 0.5% q/q, which is also our expectation (2.1% y/y).

They added that a downward correction of the large build in inventories in the third quarter emerges as a risk to their outlook.