UK is still topping the headlines following the outcome of the election, as UK Political Chaos Raises Brexit Risks. How long can GBPUSD drop? Below are the UK election impact on GBPUSD.

June 14, CFI Markets – The Pound headed for the biggest drop in a year after the shocking election that saw Britain’s ruling Conservatives lead by Prime Minister Theresa May, loses majority of the parliament 10 days before going into the EU exit talks set to start on June 19, 2017.

On June 13, 2017 Pound edged slightly up against the Dollar in a corrective mode. The cost of living- inflation rates recorded 2.9 % in May the highest level since June 2013. This has exerted pressure on British households and the decision of Bank of England’s interest rate and employment data, set this week.

Inflation is now above the Bank of England’s target of 2%. Moreover,  it is rising much faster than wages, meaning Britons are seeing their real income fall and their budgets squeezed. According to Retirement Advantage readings, British households needs an extra estimate of £790 a year on average to maintain the same standard of living. This is in comparison to the year ago. 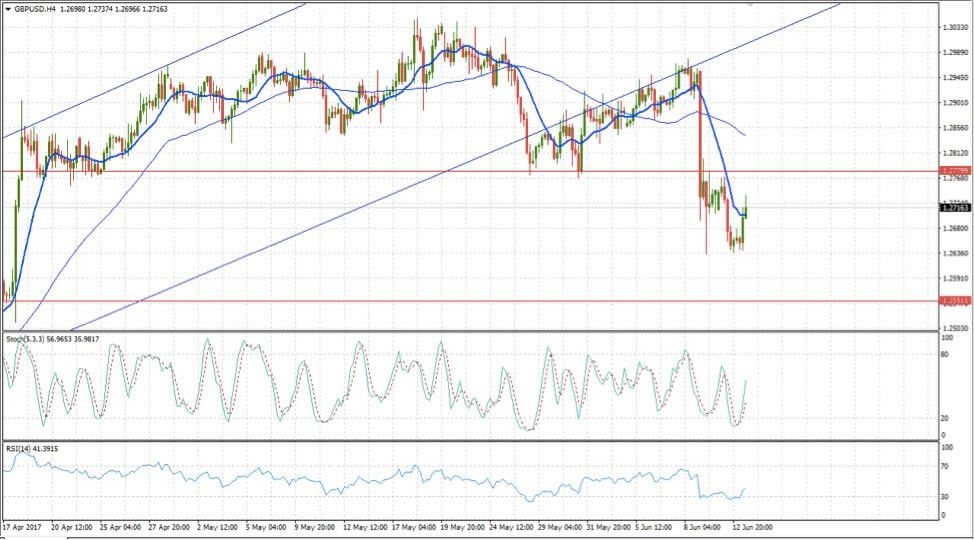 Pound has once again rebounded after visiting the support area USD 1.2630. Thus, forming a double bottom on the 4 hour frame chart. Long-term horizon are expected to move sideways approaching declines amid political stress, this movement could signify shorts. For the week ended June 6, 2017 Pound shorts among asset managers and institutional investors were close to their lowest levels since October 20, 2016.

We project a download movements for the Pound in the short term trades, and the market is prone to reacts in the direction of selling, as the UK election called by Theresa May, was to strength her power through achieving a majority stake in the parliament, however the UK election results backfired. Now May, must rely on the support of Northern Ireland’s Democratic Party to reinforce her presence.

The UK equally stuck between the challenging political situation and the tough economic outlook, will Brexit be put on hold to get short term stability in the country? We remain Bearish on the Sterling.

Why should traders consider CFI Markets?

CFI Markets dedicates its time and expertise to provide you with the best expert support, superior conditions and the high security of a CySEC regulated firm. There are many reasons why you should open an account with CFI Markets; here are the top 10 reasons:

The information provided in the UK Political Chaos Raises Brexit Risks article, should not be construed as investment advice. Forex and CFDs are leveraged products that incur a high level of risk and a small adverse market movement may expose the client to lose the entire invested capital. Therefore, you should not speculate with capital that you cannot afford to lose and be aware of trading risks.