UK General election delivers hung parliament, as none of the candidates got a sufficient amount of seats in the House of Commons. What are the consequences?

9 June, AtoZForex – Yesterday, the UK residents were flooding to the polling stations to vote in the UK General Election. 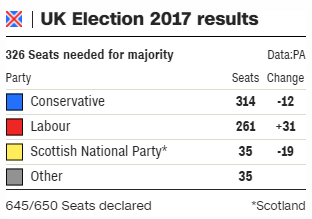 Following the votes, the election delivered the hung parliament. The UK Prime Minister Theresa May has won 315 seats, where her main competitor, Labor party representative Jeremy Corbyn, won 261 seats. In order to win the elections, the candidate must win at least 326 seats.

What is a hung parliament?

Such situation occurs when no single party has a majority of seats in the House of Commons. The same case has happened before in 2010 when the Conservative party has formed a coalition with the Liberal Democrats. The almost-winning party can team up with smaller parties, in order to form a government.

Can Conservatives form a government via coalition?

According to the latest projections, the Conservatives might reach a working majority through an alliance with Northern Ireland’s pro-Brexit Democratic Unionist Party. However, it is also possible that they govern alone. The final results of the elections will be available on the midday on Friday.

Will Theresa May resign?

Mrs. May has already faced calls to resign, even though her party members believe that the situation is stable enough. She might have called the election earlier than needed and reportedly has made the electoral campaign about her personal leadership.

Normally, the Conservatives are more merciless when it comes to getting rid of underperforming leaders.

Who could replace May?

There are five main candidates to replace Mrs. May in case things go wrong:

What could the result of the UK elections mean for Brexit?

According to the industry experts, the UK Snap election result will definitely delay the Brexit divorce talks. The official start of the Brexit talks is scheduled to start on the 19th of June. However, given the current situation in the UK, the talks may need more planning.

Moreover, the result of the UK General Election might be perceived by the next UK government as the call for softer Brexit. The former Chancellor of the Exchequer George Osborne has stated:

In case the Conservatives decide to form a government with the Northern Ireland’s DUP, the views of the latter party also could impact the looming Brexit. In fact, the DUP is willing to have a “comprehensive free trade and customs agreement,” and a “frictionless border” with the Irish Republic.

Nevertheless, the risk that those authorities that wanted the hardest Brexit will take the lead of the government by a small majority stays in place.

As The Pound Sterling has slipped to a multi – month low, as the UK General election delivers hung parliament. The currency has plunged to $1.2632 on Friday morning. 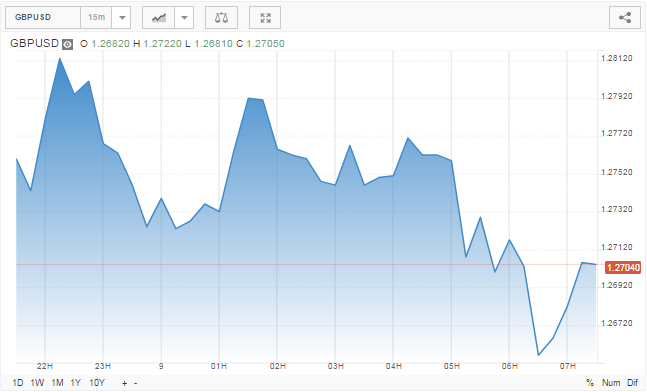 The Cable has slipped 2.16 percent to $1.2671 as of 8:01 AM London time in volatile trade, after fluctuating overnight during the Asian session. CFI Markets’ research team has kept track of GBPUSD until the 13th of June, follow up with their analysis for the latest updates on cable.