March 22, 2019, | AtoZ Markets – In the crypto world it is now known that Twitter CEO Jack Dorsey is a big fan and supporter of Bitcoin. And now he goes a little further, after posting crypto engineer jobs for Square. He is also the owner of payment app Square and placing a special appeal on behalf of this organization. Dorsey is looking for three to four crypto developers and one designer to work full time on Bitcoin and the crypto ecosystem. He even says to pay out in Bitcoin. 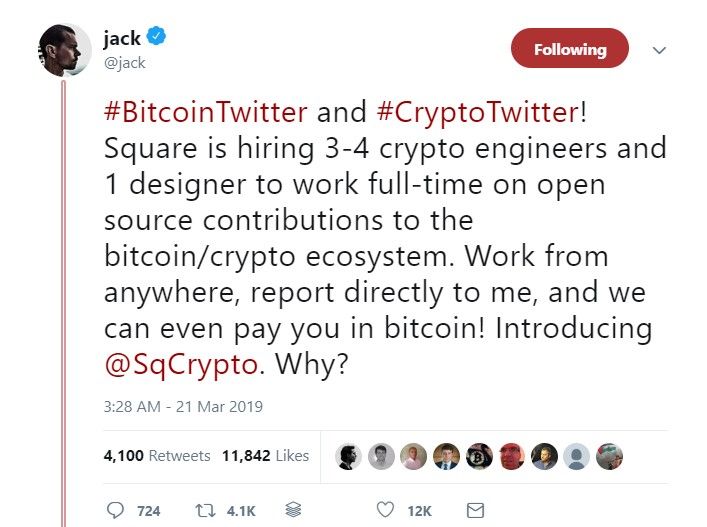 Last week Jack Dorsey had a conversation with Mike Brock, who also works at Square. He asked him: “What is the most impactful thing we can do for the Bitcoin community?” Brock’s answer was simple: “Let’s pay people to make the crypto ecosystem better.”

Dorsey did not hesitate for a moment and placed the call directly on Twitter. To give something back to the Bitcoin community, he is now looking for a number of employees who are engaged in improving Bitcoin.

The Bitcoin protocol is an open source project. Anyone who wants to can suggest improvements to the Bitcoin software. It is a decentralized project, developers from all over the world work every day to improve Bitcoin. Since there is no central authority to manage the process, these developers do not receive a steady income. Many of them voluntarily work on improving Bitcoin, often in addition to the existing work. But some developers are sponsored by a person or an organization.

The call from Jack Dorsey ensures that a number of developers can work full-time on Bitcoin. It may be a small number, but it is a nice gesture to the Bitcoin community. The call was therefore received with great enthusiasm within the community.

The initiative by Square is not unexpected since Jack Dorsey is an open supporter of cryptocurrencies. He has made that known well in the past. In the start of this month, he said in a podcast that he would love to be a part of Stack Sat Saturday, a campaign where users buy USD 25 worth of Bitcoin every week. He said then that he wanted to be a part of the campaign, but he had already maxed out his CashApp weekly crypto limit.

CashApp is Square’s application through which users can buy cryptocurrencies through the platform. The revelation led people to infer that Jack had been buying cryptocurrencies in large amounts. Specifically, around USD 10,000, since that is the weekly crypto buying limit on Square.

Square declared annual Bitcoin revenue of USD 166 million in 2018. Each quarter saw more sales than the last, with Q4 making an astounding USD 52 million. Profitability is another matter since most of the revenue generation had been invested back in buying Bitcoin for users.

Tags Bitcoin Cryptocurrrency Twitter
Forex Crypto
Top 5 Forex Brokers
Top 5 Crypto Exchanges
Your subscription could not be saved. Please try again.
Thank you for subscribing. You will be the first to receive all the latest news, updates, and exclusive advice from the AtoZ Markets experts.
Everyone is reading
Top 5 Forex MT5 Indicators for 2021 you should try
Top 5 Cryptos to Watch in Quarter 2 2021
Bitcoin Facing Resistance Around $60,000 Event Area - What Next?
close ×