March 7, 2019, | AtoZ Markets – The CEO and co-founder of Twitter, and CEO and founder of Cash App Jack Dorsey seem to be buying a lot of Bitcoin, mentioning that he had reached his weekly Bitcoin buying limit of $10,000 on his own Cash App platform.

This information came during a recent interview on the Tales from the Crypt crypto podcast. Marty Bent, the show’s host, was talking to Jack Dorsey about the Twitter-based #stackingsats Bitcoin-buying campaign, to which Jack Dorsey replied that:

" I saw that on Twitter, all the screenshots, I thought that was awesome. I would have participated, but I already exceeded my 'Bitcoin buying' limit on Cash App. So, I couldn’t purchase any more Bitcoin."

Also, Bent said that there’s always tomorrow, to which Jack responded that tomorrow he probably can and he thinks that he always has a limit that rotates every week or so. 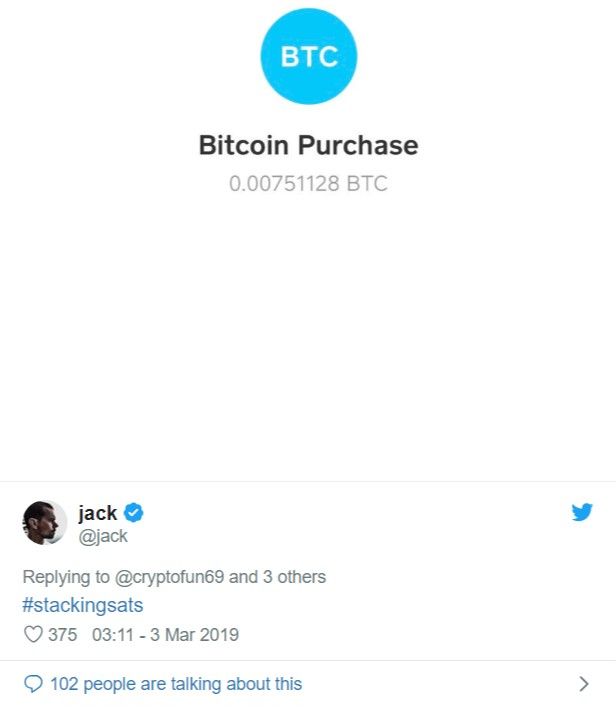 As reported, when support for buying and selling crypto assets launched on Cash App about a year ago, the weekly limit for Bitcoin buying is indeed $10,000. Of course, It is possible that Dorsey decided to buy the maximum amount of Bitcoin only on that particular week – or some other byzantine explanation. Because Bent and Dorsey did not elaborate, the reader must decide how likely this possibility is. 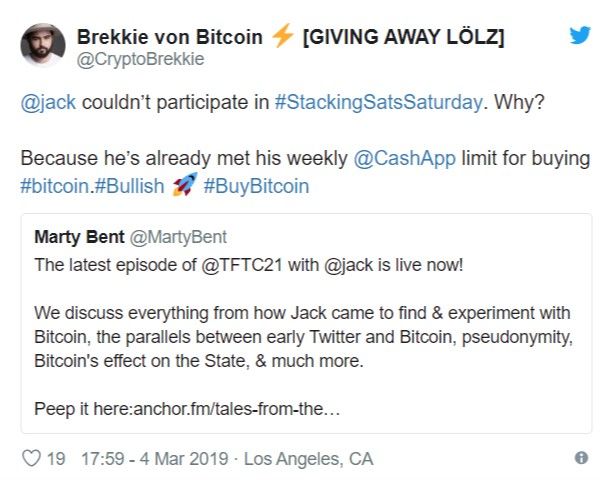 Jack optimism for the Bitcoin and cryptocurrency

What is beyond speculation is Dorsey’s rapidly rising interest in the cryptocurrency community and industry. The CEO first disclose his affinity for Bitcoin and crypto last month, during an interview with the Joe Rogan on his Joe Rogan Experience YouTube channel. Twitter, Cash App CEO Jack Dorsey quoted that:

"Imagine being born this year, only knowing that the potential for a global currency e.g., Bitcoin exists. That is exciting, You kind of see this with the adoption of any critical technology e.g. You see children today going up to any screen and having an expectation that they can slide it, and touch it, and zoom, and use their fingers. And it just speaks to the impact that the iPhone and the iPad had in changing the expectation, the same will be true for Bitcoin and blockchain and digital currency."

He has stated that he thinks Bitcoin is the “native currency of the internet,” adding during his interview with Bent that “he can’t think of anything more exciting than having a native internet currency.” Dorsey sees himself as taking an active role in the success of Bitcoin. He added during the interview that: “I don’t want to wait around for that to happen, to me, or to us as a company – I want to help make it happen.”