Trump trade concerns drag down the Mexican Peso. As President-elect’s includes building a wall on US-Mexico border, Mexican economy may be at risk.

5 January, AtoZForex – The Mexican Peso bearishness is most likely to continue in 2017, with traders facing challenges regarding changes in the US trade policy. Analysts believe that the market is convinced that Trump will actually execute changes in relation to Mexico and its production.

The Mexican currency dropped for a second consecutive day to record lows versus USD. Traders seem to worry about the negative influence of Donald Trump’s agenda on the Mexican economy. The global interest rates and currencies strategist at Macquarie Group Limited, Thierry Albert Wizman, has stated:

“The key driver for the last two days is the news that Ford would not be investing in Mexico and there’s concern GM. People were looking for investment in Mexico to be stronger this year, and now a lot of foreign direct investment can be taken away from Mexico without any legal” action.”

The Mexican Peso shortly traded more than 2 percent weaker against the greenback on Wednesday, reaching 21.619 points.

Donald Trump has called for an upgrade of the North American Free Trade Agreement. Moreover, President-elect agenda includes building a wall on the US-Mexico border. As a consequence, markets observed USDMXN as an estimate of the US elections result. The director of corporate FX sales America at Societe Generale, Carl Forcheski, mentioned that after post selection spike, USDMXN has been trading in a range in December. 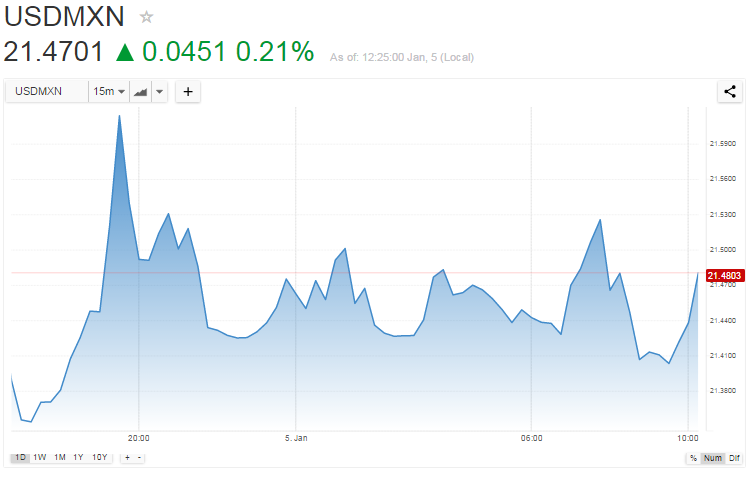 What is next for Mexican Peso?

The announcement from the Ford Motor that it cancels production of a $1.6 billion plant in the US has weighed on Peso on Tuesday. Moreover, Donald Trump has hit the automaker for transferring jobs outside the country. Ford CEO Mark Fields indicated that the decision not to invest in Mexico appeared after the firm assessed demand potential.

The shifts in the Mexican currency during the New Year indicate a possible further weakness. Before Tuesday, Mr. Wizman expected USDMXN to trade to 21.5. Currently, Societe Generale’s analyst anticipates the pair to shift 22 or 23 later in 2017.