Bitcoin and other Cryptocurrencies have rallied significantly this week. Bitcoin trade volume in the last one week has increased by nearly 40%, from $3.1 billion to $4.3 billion according to Coinmarketcap. This is happening on the back of a renewed optimism among Cryptocurrency traders and investors. Though the current rally is not enough to justify total market recovery but many investors believe if price could get out of the multi-month range, the chance is high.

Bitcoin still maintains its big dominance on the market, accounting for nearly 33% of the combined market trade volume. It's expected that the performance of other currencies is dependent on how Bitcoin behaves, though there are small variations to this claim. Meanwhile, the major altcoins have performed better than Bitcoin in the last one week. Ripple, Ethereum and Litecoin gained nearly 25%, 12% and 10% respectively against Bitcoin's 4%. Ripple's trade volume surged above $1 billion yesterday, from last week's average of $250 million. Smaller cryptocurrencies have also recorded significant price and trade volume surge in the same period.

Bitcoin Technical Analysis: Where do the Crypto Market go from here?

The talk of market optimism causing current price positive changes is prevalent. However, the market is used to having such bounces before it takes a new low. In fact there have been much bigger bounces this year. Bitcoin made 100%, 54% and 47% upsurges in February, April and June respectively. More recently, there was a 25% surge in August, 12% and 10% in September and October respectively. The current 5% BTC surge seen so far this month, is the least we have seen this year. Having said this, it's is also important to note price's failure to break below $6000 since it dropped there in February. Some believe that might just be the low for the year as price might not get enough momentum to drop below it. If that's the case, price needs enough bullish momentum to break out of the red zone. Price is still in a bearish triangle as shown in the last update. The chart below looks at the fall since January. 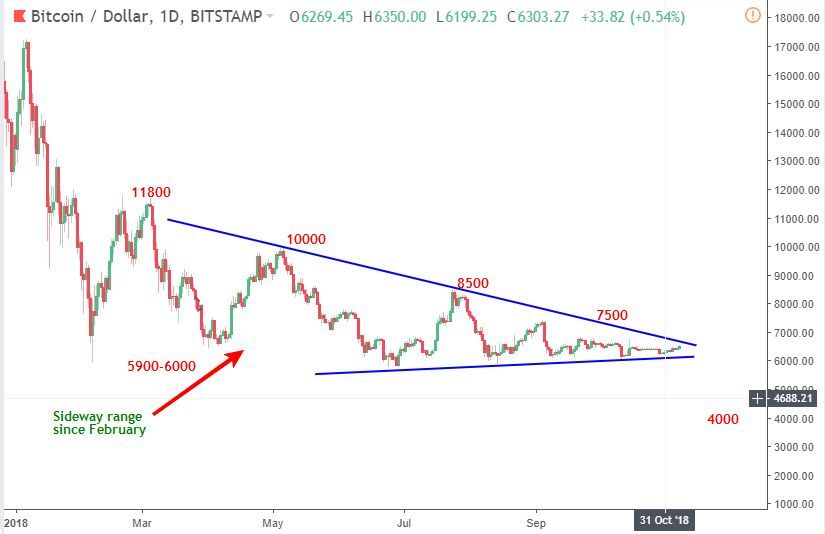 The chart above shows the insignificance of the current rally. The market is still very much bearish, only being held above 5900-6000 support zone. How long will the support hold price from falling further? Eventually, a breakout would happen – upside or downside. Price will have to break above 7500 at least, before the talk of a genuine bullish recovery. After 7500, there are 8500, 10000 and 11800 important price levels. Whether the current talk of optimism will lead to these levels or not, we shall see in the weeks to come. If price eventually drops down to break below 5900-6000, then a new low will happen around 4000.