Candlestick patterns, which are technical trading tools, have been used for centuries to predict price direction. By referring to this cheat sheet guide, you will get the basic price-action structure of the 10 most effective patterns that are mentioned below.

May 11, 2020 | AtoZ Markets – Many people would agree that learning to become a forex trader is difficult. This is true especially when there are so many different ways, methods, strategies out there. The most popular way to look for trading opportunities is by looking for candlestick patterns.

The problem here is that there are more than 30 candlestick patterns to learn from memory. Learning these 30+ candlesticks and instantly recognizing them in real-time can be difficult when you are a beginner. That is why we have designed this top 10 effective candlestick pattern cheat sheet. It’ll save you time and money.

Now before you get your hands on this cheat sheet, let’s go through the absolute basics…

What is a candlestick?

A candlestick is a way of displaying information about an asset’s price movement. Candlestick charts are one of the most popular components of technical analysis, enabling traders to interpret price information quickly and from just a few price bars.

This article focuses on a daily chart, wherein each candlestick details a single day’s trading. It has three basic features:

Over time, individual candlesticks form patterns that traders can use to recognize major support and resistance levels. There are a great many candlestick patterns that indicate an opportunity within a market – some provide insight into the balance between buying and selling pressures, while others identify continuation patterns or market indecision.

Before you start trading, it’s important to familiarise yourself with the basics of candlestick patterns and how they can inform your decisions.

Bullish patterns may form after a market downtrend, and signal a reversal of price movement. They are an indicator for traders to consider opening a long position to profit from any upward trajectory. Below, we have five candlestick patterns that may signal a bullish move in the markets.

The hammer candlestick pattern is formed of a short body with a long lower wick and is found at the bottom of a downward trend.

A hammer shows that although there were selling pressures during the day, ultimately a strong buying pressure drove the price back up. The color of the body can vary, but green hammers indicate a stronger bull market than red hammers. 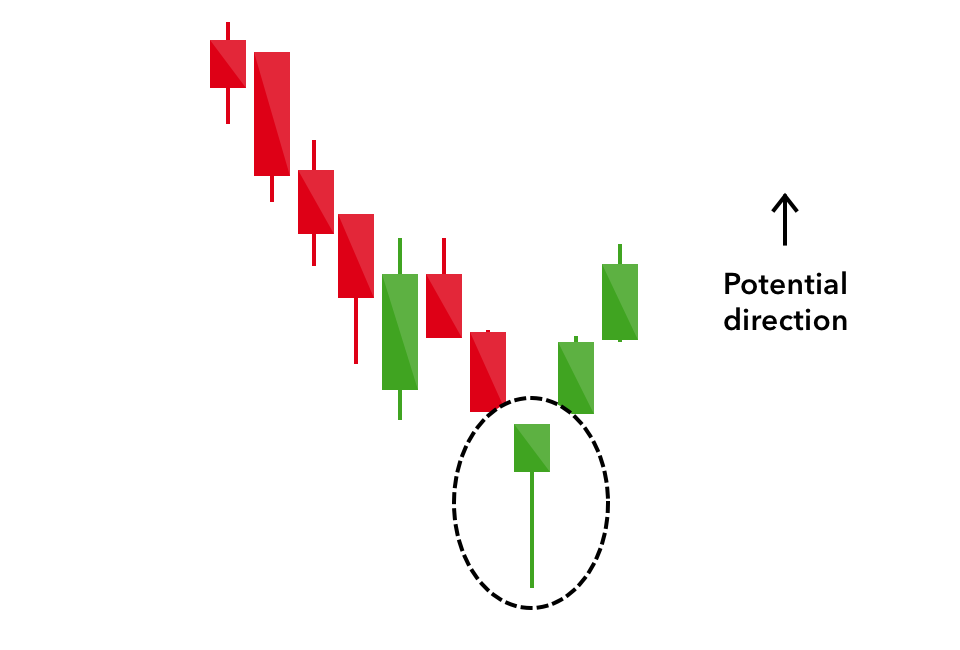 A similarly bullish pattern is the inverted hammer. The only difference being that the upper wick is long, while the lower wick is short.

It indicates a buying pressure, followed by a selling pressure that was not strong enough to drive the market price down. The inverse hammer suggests that buyers will soon have control of the market.

The bullish engulfing pattern is two candle reversal pattern that is formed at the end of a downtrend or an uptrend.  The first candle is a short red body that is completely engulfed by a larger green candle.

Though the second day opens lower than the first, the bullish market pushes the price up, culminating in an obvious win for buyers.

The Piercing Pattern is a two candle reversal pattern made up of a long red candle, followed by a long green candle. The two-stick pattern indicates a strong buying pressure, as the price is pushed up to or above the mid-price of the previous day.

The morning star candlestick pattern is considered a sign of hope in a bleak market downtrend. It is a three-stick pattern: one short-bodied candle between a long red and a long green. Traditionally, the ‘star’ will have no overlap with the longer bodies, as the market gaps both on open and close.

It signals that the selling pressure of the first day is subsiding, and a bull market is on the horizon.

Bearish candlestick patterns usually form after an uptrend and signal a point of resistance. Heavy pessimism about the market price often causes traders to close their long positions, and open a short position to take advantage of the falling price.

The hanging man is the bearish equivalent of a hammer; it has the same shape but forms at the end of an uptrend.

It indicates that there was a significant sell-off during the day, but that buyers were able to push the price up again. The large sell-off is often seen as an indication that the bulls are losing control of the market.

The shooting star is the same shape as the inverted hammer, but is formed in an uptrend: it has a small lower body and a long upper wick.

Usually, the market will gap slightly higher on opening and rally to an intra-day high before closing at a price just above the open – like a star falling to the ground.

A bearish engulfing pattern occurs at the end of an uptrend. The first candle has a small green body that is engulfed by a subsequent long red candle.

It signifies a peak or slowdown of price movement and is an indication that the market downturn is imminent. The lower the second candle goes, the more significant the trend is likely to be.

The evening star is a three-candlestick pattern that is the equivalent of the bullish morning star. It is formed of a short candle sandwiched between a long green candle and a large red candlestick.

This signifies the reversal of an uptrend and is particularly strong when the third candlestick wipes the gains of the first candle.

The three black crows candlestick pattern comprises of three consecutive long red candles with short or non-existent wicks. Each session opens at a similar price to the previous day, but selling pressures push the price lower and lower with each close.

Traders interpret this pattern as the start of a bearish downtrend, as the sellers have overtaken the buyers during three successive trading days. 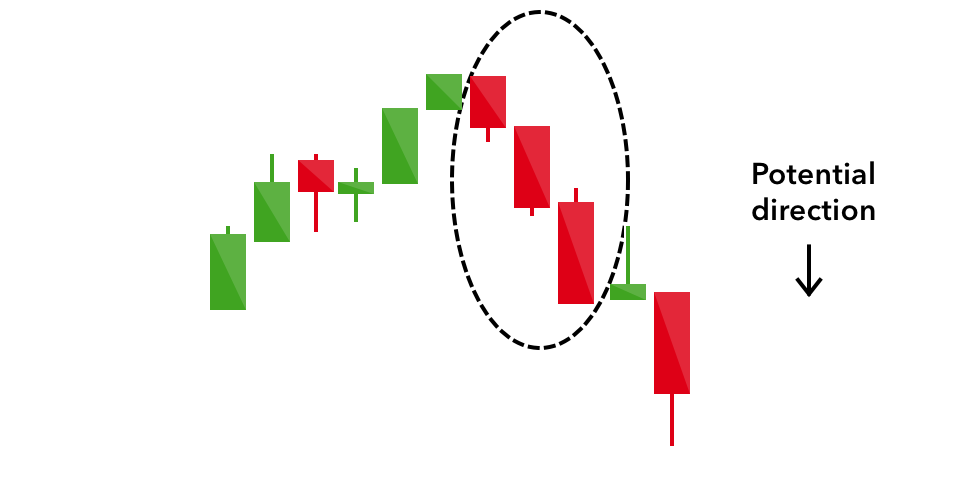 If a candlestick pattern doesn’t indicate a change in market direction, it is what is known as a continuation pattern. These can help traders to identify a period of rest in the market when there is market indecision or neutral price movement.

The Doji Candlestick pattern resembles a cross or plus sign and it is formed from a single candle. Alone a Doji is a neutral signal and it represents the equilibrium between demand and supply. The appearance of this pattern indicates a tug of war in which neither the bulls nor the bears are winning.

In the case of an uptrend, the bulls will be winning the battle, and the price goes higher, but after the appearance of Doji, the strength of the bulls is in doubt. The opposite is true in case of a downtrend. If we come across this pattern, we must wait for extra confirmation to take any action.

The spinning top candlestick pattern has a short body centered between wicks of equal length. The pattern indicates indecision in the market, resulting in no meaningful change in price: the bulls sent the price higher, while the bears pushed it low again. Spinning tops are often interpreted as a period of consolidation, or rest, following a significant uptrend or downtrend.

On its own, the spinning top is a relatively benign signal, but it can be interpreted as a sign of things to come as it indicates that the ongoing market pressure is losing control.

Forex trading isn’t meant to be easy. However, after going through this top 10 most effective candlestick pattern cheat sheet guide, you will have gained a visual aid that will help you establish and gain experience with these price action patterns.

By focusing on learning to become better, practicing the patterns, and testing them out – only then you will gain an edge that is needed to conquer the markets. Cheers and safe trading. 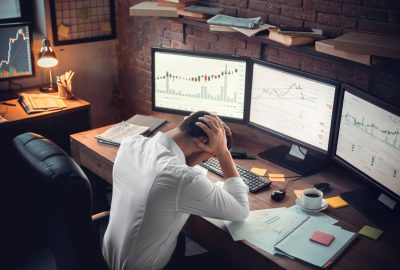 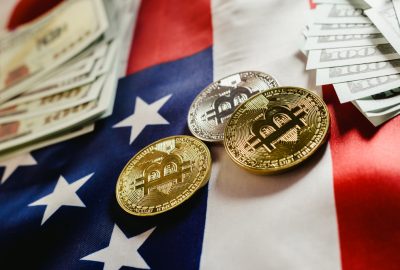