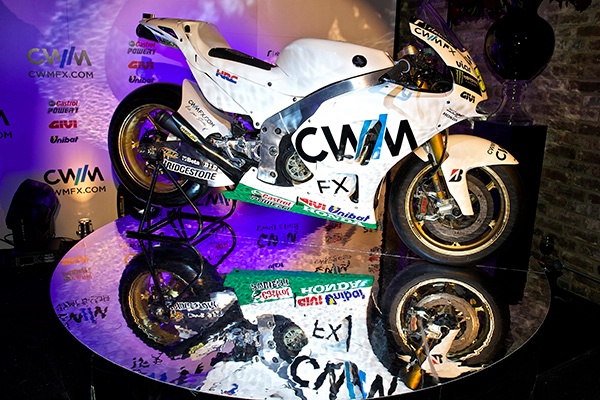 The dissociation of FC Chelsea with CWM FX for avoiding negative PR, has brought new developments. The football giant has set unconsciously a domino effect in motion. Undoubtedly, the numerous of adverse news bulletin also added pressure to the multiple sponsor agreements, which are reconsidering the deals made.

Such is the case for the MotoGP team, LCR Honda, who signed a sponsorship contract with CWM. Currently, the MotoGP team is investigating the overall situation of CWM and maintains the agreed upon arrangements. Accordingly, Mr. Lucio Cecchinelli, the LCR Honda’s team prinicipal commented the following: “we will operate as normal this weekend. That includes keeping the CWM logos.”

In furtherance of the stated concern, LCR Honda is seeking to arrange a meeting with CWM. Most probably, this matter will take place somewhere next week, as the MotoGP team is focusing at the moment on the Qatar race weekend. Even so, LCR Honda is highly determined to conclude the situation as soon as possible.

Ever since the start of this simmering month, CWMFX has been in the spotlight of negative PR, ranging from an involvement with a $16bln Ponzi scheme to the invigorating London Police raid at the Heron venue. Having various incidents happening over a short period, the timeline of CWMFX incidents below, clarifies the sequence of the entire case in an apparent manner:

CWM's Response to the situation

In response to all the negative PR as well as yesterday’s confirmed investigations of the London Police, CWM has commented upon the horrid situation: “CWM believe that they have been the victim of an orchestrated campaign initiated by individuals motivated by personal animosity.”

Additionally, a few sources close to CWMFX, have publicly hinted that former employees of the firm might be working behind the scenes to intentionally harm the brokerage. In an explanation of the firm, spokesperson commented upon this as follow: “CWM understands from third parties that clients have received calls from an individual; the purpose of the calls appears to have been to raise doubt about CWM as a business. Despite requests made of the police, they have thus far failed to provide the name of a single investor who has raised concerns with them,”

Last but not least, the CWM holding has assured the public that it will persevere from all these momentous displays and maintain a paramount position within the market: “CWM World is a respected group of companies with a multi-million pound turnover, operating with dozens of partners in a number of countries. There is no sustainable basis for these allegations and we will continue to operate as a premier brand,”