The US financial magnate Tim Draper is considered to be quite respected in the crypto community both for his bullish position and his success when investing in markets which are as unpredictable as the crypto industry.

Recently, the American investor has spoken on crypto regulations bill draft which was revealed by Varun Sethi, an Indian blockchain lawyer, on July 15. The document was hinting on the possibility of the local government banning Bitcoin in India’s region.

The text in the bill reads:  “No person shall mine, generate, hold, sell, deal in, issue, transfer, dispose of or use Cryptocurrency in the territory of India.”

Draper rejected such strategy, describing it in his Twitter as a shame, pathetic and corrupt. The full Tweet reads:

As it was expected, the American magnate’s message triggered strong reactions from the Indian crypto community.

Notable, that despite a sense of alertness to possible crypto ban’s approval, most of the users criticized investor for taking a rumor for granted.

Among Draper’s message opposers was Nischal Shetty, CEO of Indian exchange WazirX and one of the Indian crypto community leaders. Shetty explained in his Tweet: 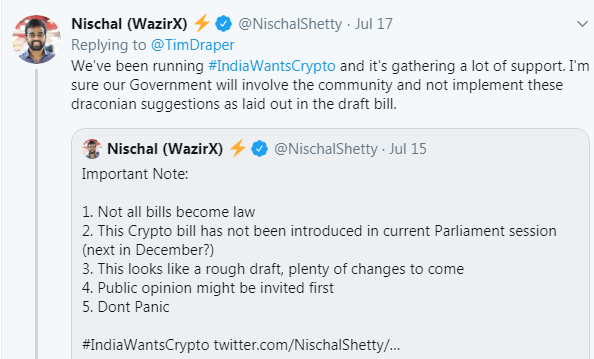 Against the background of Tim Draper’s Tweets, a cyber movement is brewing to give crypto enthusiasts greater visibility.

The hashtag #IndiaWantsCrypto spreading in Tweeter is supposed to ensure that Indian lawmakers receive in their feeds the arguments of the community in favor of the use and adoption of cryptocurrencies.

Will India become a no-go zone for Bitcoin?

The controversial attitude of the Indian authorities toward crypto industry raises many questions. For example, in June 2019, India’s new finance secretary Subhash Chandra Garg confirmed that the report detailing the country’s crypto regulation is ready and soon will be submitted.

However, just a few weeks after this announcement, one of the largest Indian crypto exchanges in the country Koinex announced about the termination of its service due to the ongoing regulatory uncertainties in the country.

In addition, the representatives of the Reserve Bank of India (RBI) made it clear, that upcoming Facebook Libra coin is not welcome in the country due to the ban of blockchain-based currency transactions.

If the Draper’s criticized bill approved in its entirety, any crypto, except for country’s sovereign token, could become an outlaw in India.

However, while one might argue that banning Bitcoin may be “pathetic” due to decentralization, it’s also important to accept that if call the country’s government “corrupt” do not expect the best reaction even among those Indian crypto community members who are seeking to legalize crypto.