Reuters which was initially founded by Paul Julius Reuter in 1851 in London as a business transmitting stock market quotations has come a long way after being acquired by Toronto based Thomson group, therefore forming the Thomson Reuters corperation. The company boasted of about $12.5 billion 2013 revenues.

It has grown to be one of the most prestigious brokers in the industry. According to a recently released report on its Fx volumes for November, its average daily FX volumes for the month which includes matching FXall and the Thomson Reuters SEF as a combined calculation, showed a reduction in all business units comparative to its October’s figures. The average FX daily volume for October amounted to $135 billion. In November an 11.7% decrease in average daily volumes occurred putting the new figure at $120 billion.

This has shown a 7.4% decrease in total average daily volumes in November over that of October, and the downturn from September’s results which were the best results so far this year across the company’s combined operations.

The average FX daily volumes is shown in the diagram below: 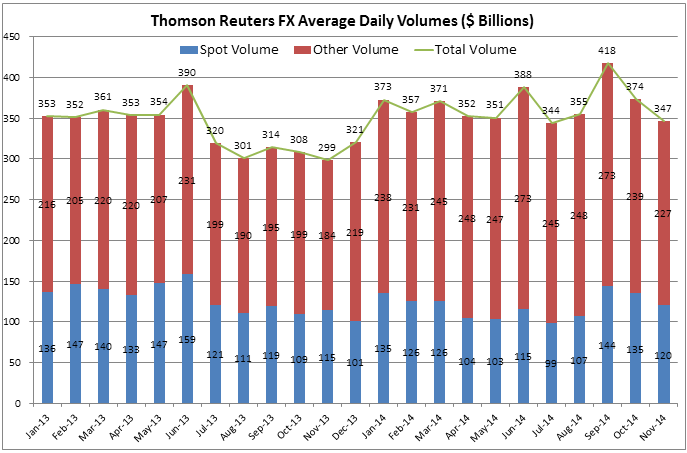