September 8, 2021, | AtoZ Markets-In the wake of the so-called Brexit, the British companies have been hit by the impact of the divorce from what was their main trading partner, and the figures in the red are starting to look worrying.

In the first six months of this year, German imports from Britain plunged nearly 11% year-on-year to €16.1 billion ($19 billion), according to Federal Statistical Office data analyzed by Reuters.

Reuters has published a report, mentioning that while German exports to Britain rose 2.6% to €32.1 billion, that could not prevent a decline in bilateral trade, down 2.3% to €48.2 billion.

This resulted in Britain dropping to 11th place from ninth, and down from fifth before it voted to leave the EU in 2016.

A survey last year showed that one in five companies were reorganizing supply chains to switch from British to EU suppliers.

That trend has been growing, although British companies are even worse off, said Michael Schmidt, president of the British Chamber of Commerce in Germany, making any turnaround before the end of this year unlikely.

"More and more small and medium-sized companies are stopping trading (in Britain) because of these (Brexit-related) obstacles," Schmidt told Reuters. The sharp decline in the first half was also driven by carryover effects before new hurdles, such as customs controls.

"Many companies anticipated the problems ... so they decided to bring forward imports by increasing inventories," the official said.

What Are the Figures?

The data showed that German imports of British agricultural products fell by more than 80% in the first six months.

Imports of pharmaceuticals fell by almost half. 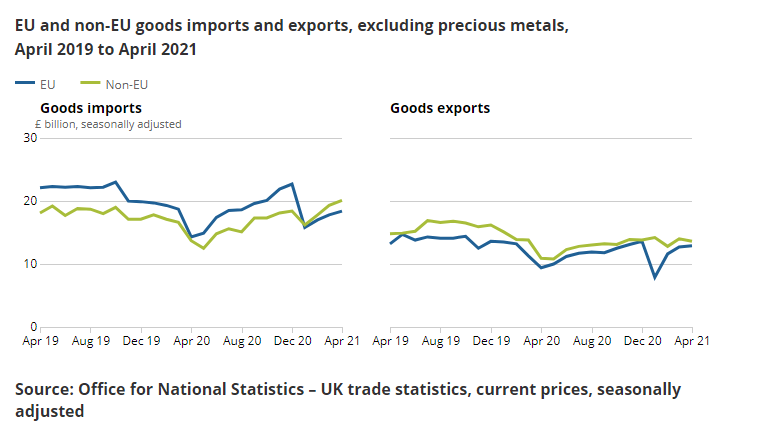 "For many small British companies, Brexit meant losing access to their most important export market... It's like shooting yourself in the foot. And this explains why German imports from Great Britain are now in free fall," said the official.

"Many small businesses cannot afford the extra burden of keeping up with and complying with all the customs regulations, such as health certificates for cheese and other fresh produce," Schmidt said.

The UK-EU post-Brexit trade deal does not impose tariffs or duties on the flow of goods, but it does require the introduction of new border controls and red tape that in practice are imposing extra costs on businesses.

On the other hand, for large companies, there will be time-consuming workarounds, but for many others, it will mean paying more tariffs or reinvesting in the EU, some analysts have said.

However, the British Retail Consortium, which represents more than 170 retailers in the UK, is working with its members to seek short-term solutions and dialogue with the UK government and the EU to offer definitive options and mitigate the effects of the new tariffs

What do you think of our article? Leave us your comments as they are very important to us.