June 30, 2021, | AtoZ Markets- In a recent poll conducted by Reuters, the global funds leaders discussed their top investment decisions for the coming months, and this is what they said.

According to the data, the next investment decisions will be framed by the changes that central banks will make to their monetary policy. For this reason, many investors have recommended increasing exposure to equities, and reducing the holdings of debt securities.

If we look at the MSCI index of global stock market activity, we can see that we are currently at record highs.

Remember that this index measures all sources of stock returns in 50 developed and emerging markets, with 2995 components and 11 sectors.

This allows us to see that the interest in recovering investment worldwide is growing, however, it is necessary to take into account multiple macroeconomic factors that could be affect it.

What Did the Survey Say?

According to figures of Reuters, the Funds managers and chief investment officers in the United States, Europe and Japan in the asset allocation poll, recommended raising equity holdings to an average 49.5% of their model global portfolio, from this year's low of 48.7% in May.

The survey also showed that fixed income allocation fell to an average of 39.6% of the balanced global portfolio, from this year's peak of 40.3% in May.

Meanwhile, to the question about the likelihood of a significant correction in global equity and bond markets in the near-term, a majority of fund managers said it was unlikely.

However, one thing they all agreed on was talking about the importance of monetary policy in the United States. “Communication from central banks, particularly the Federal Reserve, about its tapering programme, will be key. But a lot would also depend on actual unemployment and inflation numbers.”, noted the leaders. 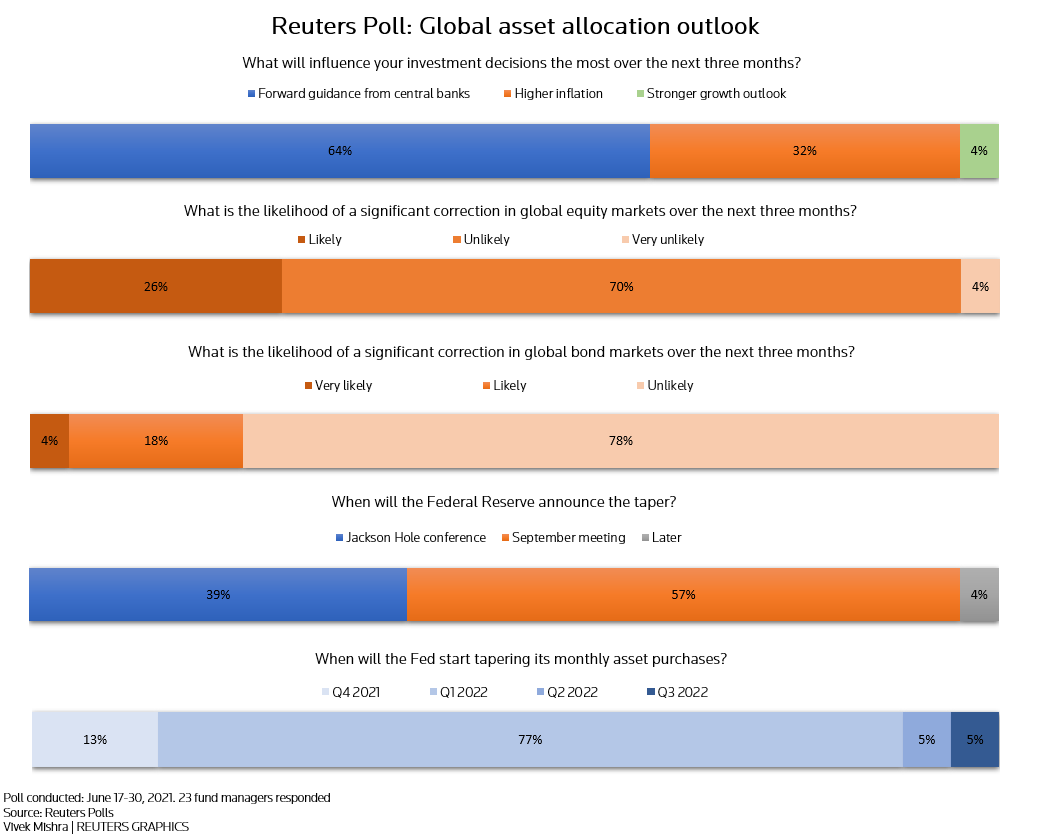 In the graph we can also see that most expect the Federal Reserve to announce in September a taper plan for its $ 120 billion monthly asset purchases program.

But a majority said the U.S. central bank would not start scaling back its monthly purchases until next year.

“The Fed’s taper announcement is likely to come in August or September, but will be an advance notice of sorts. Monetary policy will remain accommodative and any normalisation is still some distance away,” said a chief investment officer at a large U.S. fund management company.

Impact on the Markets

It's not a secret that due to the uncertainty generated by the pandemic, investors opted for fixed income regardless of the fact that profitability was very low.

However, as global economic growth is expected to improve, and fiscal policies continue to support the recovery, the market has been migrating towards riskier assets that provide better returns, such as equities.

In the same way, a greater appetite for the risk has been appearing. An example of this is that equity returns continue to hit record highs.

Meanwhile, the price of raw materials will continue to rise as long as global economic growth is strong, and the price of the dollar will remain tied to the Fed's fiscal policies.

What do you think will happen to the foreign exchange market according to this survey?