On Thursday the 18th of September Scotland may gain full independence from the United Kingdom. As for traders, this creates large uncertainty in the markets as there are no clear answers on what currency the new Scotland will use, or how importers and exporters will continue and settle their trade. Currently, the polls are suggesting that there is a more or less 50/50 chance of Scotland leaving the United Kingdom, with Westminster politicians scrambling to airports to salvage the situation. I believe this one will go down to the wire and the FX markets are watching this one closely as volatility will be high, with GBP/USD being the main currency in focus.

Why GBP is falling?

GBP has been one of the best-performing currencies in the last year, to be hit this hard recently falling back 1.3% to $1.6046 this is a real fall from grace. There has been a massive flight of capital from GBP on raised uncertainty that Scotland may leave the pound. Major orders from the biggest banks are showing investors and also businesses are selling the pound scrambling to find a safe haven until the storm has cleared above, and we can all find more clarity. Many businesses have to put together contingency plans if the separation does occur with The Royal Bank of Scotland, Lloyds and Standard Life all publicly stating that if independence is achieved they will relocate their head offices to London. This will mean jobs; personnel and capital will be leaving Scotland and finding its home in London. The implications of a ‘Yes’ vote will be substantial with a massive destabilisation of the whole British banking system. All the businesses with operations both sides of the border will be waiting in the wings for Westminster politicians to give an answer on if the Scottish will be able to use the Pound, but chancellor George Osborne has stated that this not a possibility. If Scotland does not secure the Pound will they be joining the Euro? This didn’t work out too well for Republic of Ireland albeit under different circumstances. The IMF have warned that the uncertainty could hit the financial markets hard all over the world with William Murray saying
‘The main immediate effect is likely to be uncertainty over the transition to potentially new and different monetary, financial and fiscal frameworks in Scotland.
While this uncertainty could lead to negative market reactions in the short term, the longer term will depend on the decisions being made during the transition, and I do not want to speculate on this.’
It is clear that this will take some time to clear up and sort out, but until then the situation provides plenty of opportunity of traders to take advantage of the volatility in GBP/USD but at the moment it looks like a 50/50 bet.

How traders will view the situation

I feel at the moment as there is no clear resolution. The markets are trading on the side of caution. Most businesses are preparing for the worst and that’s why we have seen such a dramatic drop in the value of Cable. 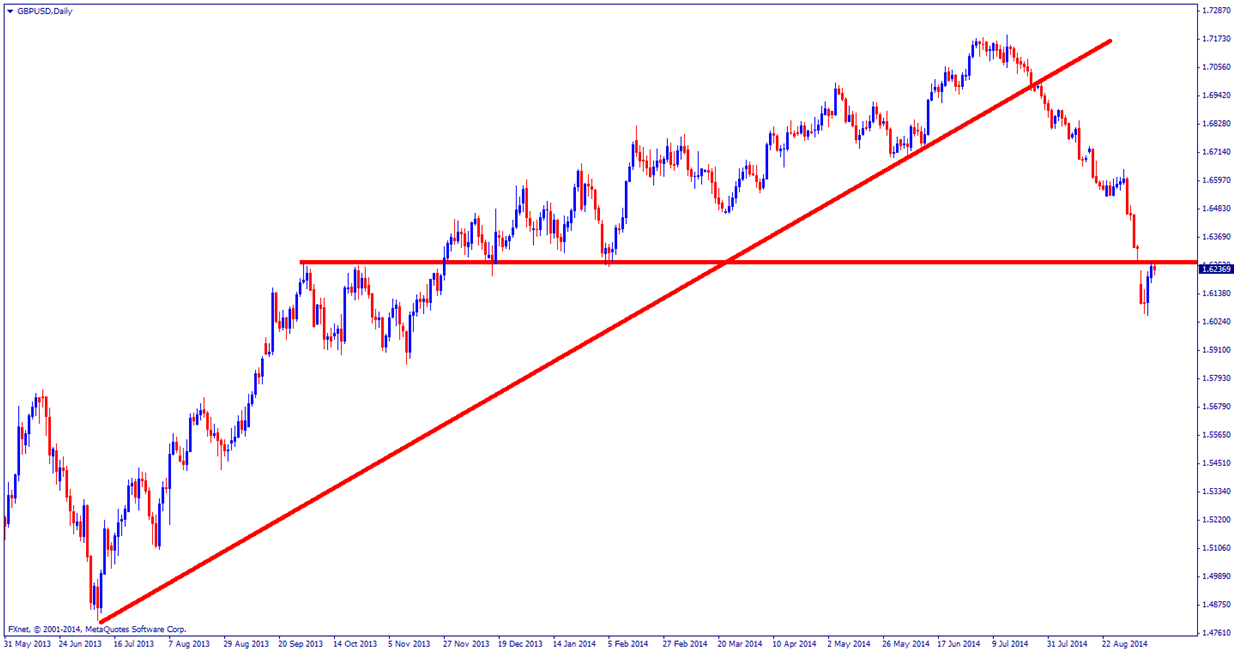 As you can see from this daily chart the fall 1.7191 (15, 07, 2014) to 1.6050 (09.09.2014) was relentless with major trend lines and support levels being broken like they weren’t even there. Now we have entered a period of consolidation around 1.6150 level where GBP buyers must have seen some value but I feel the moves in cable will still be uncertain unless we receive some more news from opinion polls suggesting an outcome of the referendum or we wait for the result itself.
Also on a technical note the selling stopped right near the 50% daily fib line and retraced nicely with a 220 pip bounce. In the near term we should look to see some consolidation with a further move down based on an uncertain outcome. If news from Scotland is edging toward a ‘No’ vote then we can look up to a retest of old highs of 1.70, But if a ‘Yes’ vote prevails then expect the Red trend line to be broken with more downside momentum. 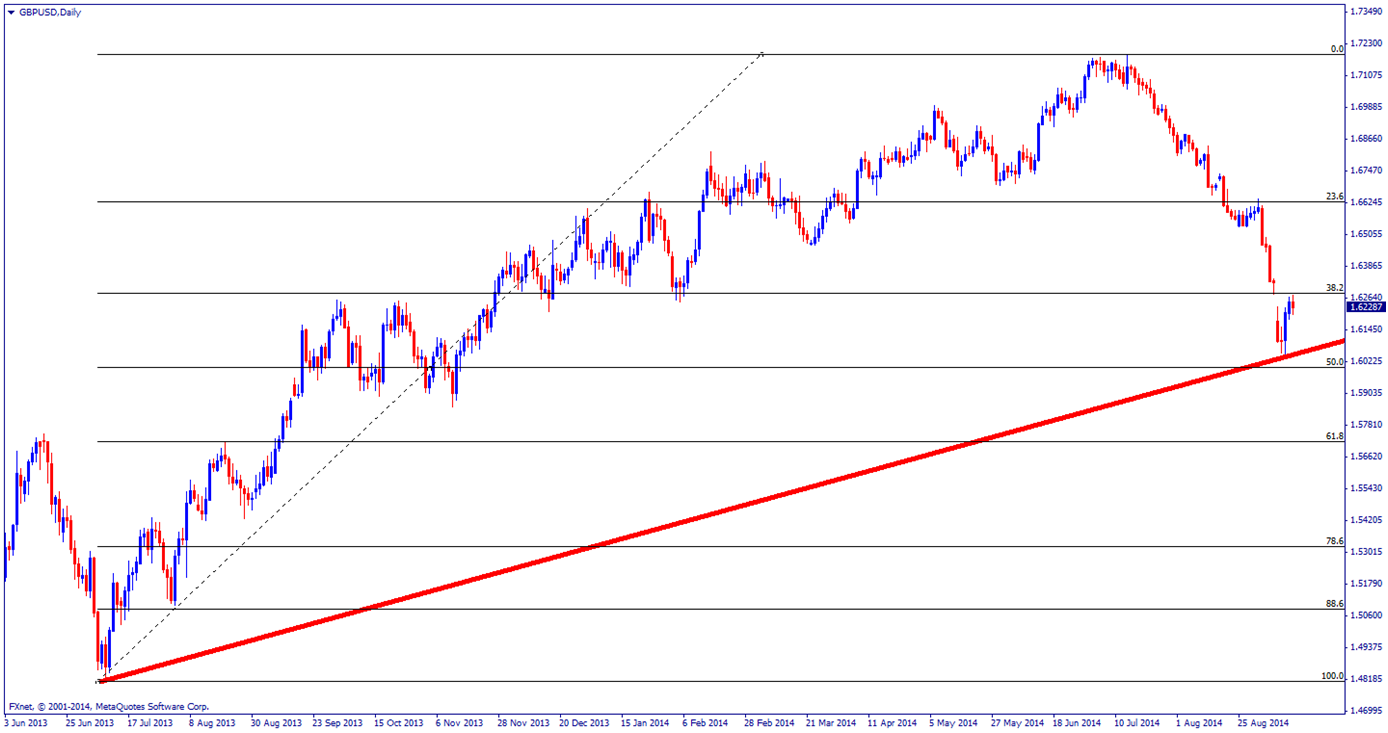